Each time I visited S last year, I wanted to get a full taste of Germany…literally.   I tried all the beers, sampled the flammkuchens and spiral potato chips at the summer wine festivals, ate crepes with Nutella as much as possible, tried each type of danish and roll at the bakery around the corner, and ate my way through the stands of bratwursts, rotwursts, currywursts, pretzels, and chocolate covered marshmallows at the Christmas markets.  Needless to say, I came back from each trip carrying a few extra lbs…and not in my luggage.

Another blogger perfectly summed up the pleasure of learning about a new culture through it’s food and getting fat in the process in her post entitled, “The Un-Glorified Rewards of Travel.”  My favorite line in her post is, “This reward, of becoming a bit fat, is very special.”  I could not agree with her more.  My absolute favorite thing about traveling is sampling the local cuisine (as much as possible!).  Living in Germany, however, where the local cuisine is primarily breaded meats, breaded bread, beer, and sugar, this practice has my jeans quaking in fear that the next schnitzel may burst their seams!

I fear that foregoing Germany’s festival foods and dinner celebrations would severely harm my year of immersion.  At the same time, I fear becoming the fat American tourist that most Germans expect me to be.   In search of the middle ground, and after a little convincing from our friends, S and I decided to eat “as Paleo as possible” as much as possible and then indulge in the occasional rahmschnitzel or kaiserschmarm at a party or festival (there are festivals in Germany just about every weekend) without guilt.   I also decided, that I’d try to create a Paleo version (I know true Paleo eaters frown upon this) of my favorite German dishes, as well as favorite foods from each of our travel adventures.

For my first trick, I’ve chosen the dazzling kartofflepuffer – a fried potato pancake served with applesauce.  I first came across this delicacy at the Wiesbaden Christmas Market….and then proceeded to have about thirty-five of them.  When I introduced my sister to these babies in Mainz this past December, we both noticed that the cooks were scooping big white chunks out of buckets and plopping them down on the griddles – huge icebergs of lard floating around and melting down, ready to be absorbed into the potato pancake mixture….YIKES!  We ate them anyway and enjoyed every second….until five minutes later when we felt disgusting.  Ah, the joys of travel!

My Paleo version of the kartofflepuffer begins with a recipe for mashed cauliflower, which S and I are OBSESSED with and eat with steak, chicken, or salmon about once a week. 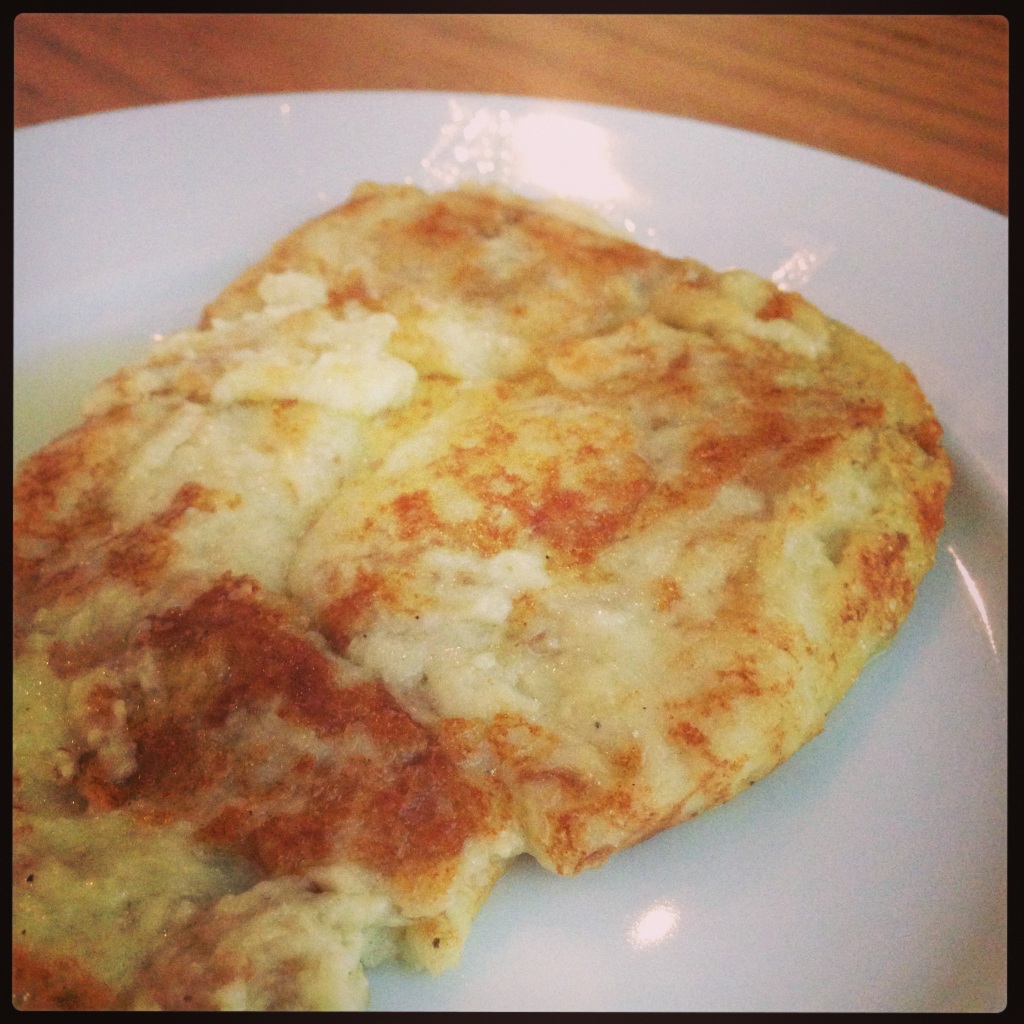 Not the prettiest pancake, but it still tasted pretty!

Now for the apple sauce (which you probably want to start first, because it takes the longest).

I hope you enjoy this traditional German treat with a healthier twist!