For just about the entire year of 1994, my sister and I refused to go to sleep each night until our Dad told us a story, all of which had to be set in the town of Lillehammer, Norway during the Olympics, and the main characters had to be named after us (but really they had to be us).  As Jennifer Weiner wrote in a letter to Salon, “Everyone wants to believe he or she is the hero of his or her own story.”   In our case, we forced our dad to make us the heroes. As kids (and now), we were obsessed with a capital “O” with the Olympics.  In my little 9-year-old heart, I truly believed I would grow up to be Kim Zemescal and win gold medals all day long.  Unfortunately, my mom made me quit gymnastics after my friend Lindsey fell off the high-bar and broke her arm.  Thanks a lot, Lindsey.  Anyway, back to Norway. During the ’94 Olympics, I’d watch the coverage constantly and was mesmerized by the pieces that they’d do on Norwegian culture and it’s legends of trolls living in the hills and dales.  So, naturally, in addition to the requirement that our bedtime stories be set in Lillehammer during the Olympics, and that the two main characters be named after us, there also had to be trolls and magic.  Of course, my dad also needed something to keep him entertained during story time, so there was an ongoing crime/mystery that needed solving and a fairly constant, high speed snow mobile chase through the landscape surrounding the Olympic village.  We loved these stories.  Overly hyper and annoying for that time of night, we perched wide-eyed in our bunk beds dressed in matching PJ’s and would throw pillows and stuffed animals at our poor Dad if, God forbid, he’d fade into jibberish and dose off mid-story after a long day of work, basketball practice, dinner, laundry, etc. We needed our story.  And then we’d always have to remind him the next night where he had left off the night before.

This is what I always think about when I think about Norway.  When S and I decided to travel to Norway over Labor Day weekend, I was thrilled at the prospect of living out my fourth-grade alter ego’s snow-mobile riding, troll conspiring, Winter Olympic saving saga.  Norway in real life did not disappoint.  It is truly a magical place.  We flew into Oslo, spent the night in a small walk-in closet-sized hotel room (it was actually kind of fun, but claustrophobics, beware of the Smart Hotel), and boarded an early train to Myrdal.  We expected the cross-country train ride to be scenic, but also a good chance to read or watch a few episodes of Season 2 of Vikings (nerds) and make the most of a “travel day.”  This turned out to be in no way just a travel day.  The views from the train were gorgeous and we quickly vowed to come back to Norway for a camping and biking trip like we saw so many doing along the route.  It also quickly became apparent how the people of this land developed legends of trolls and witches.  This is 100% the type of place where those creatures would want to hang out with mountains and rolling hills covered in rocks, lakes, waterfalls, hearty vegetation, and the occasional scattering of adorable cottages.

When we reached Myrdal – a tiny, picturesque mountain train stop – we transferred onto the Flam Railway, which is one of the steepest railways in the world. Passing through mountain tunnels and by waterfall after waterfall, we fell even more in love with Norway.  When we reached the tiny valley town of Flam, where we’d transfer to a boat that would take us down the Sognefjord, we stopped into a brewery that felt like an old Viking lodge for a few locally brewed pints.  Then we forded the fjord.  As Stephen likes to say, fjords are something you learn about in grade school and to actually be in one is a pretty remarkable experience.  The views were breathtaking.  I almost hate looking at the pictures because they do nothing to capture the natural beauty and almost dreamlike experience of being on the fjord.

After about 6 hours on the boat that seemed to go by in the blink of an eye, we reached the adorably quaint former Norwegian capital of Bergen, ran through the rain for a hearty bowl of soup, and settled in for the night.  With a solid night of sleep behind us, we explored Bergen’s fish market, where we tasted samples of smoked whale and moose sausage, a delicious fresh-caught lobster, and one of the grossest, gamiest things I’ve ever eaten – a reindeer burger.  After strolling through the old town, which reminded me a little of Annapolis, Maryland, riding the funicular up the hillside for a bird’s eye view of the port and surrounding islands, and then hiking down, we boarded a bus to Stavanger for what we thought would be another “travel day.” Coolest bus ride ever. We sat up front so we’d have a panoramic view of the drive. Again we never once opened our Kindles or IPad as we were spellbound by the scenery driving along fjords and island hopping by bridge and ferry. If I ever make a list of top-10 drives, this will surely be on it.

Stavanger, although not quite as quaint as Bergen, is a beautiful little port town made wealthy by the oil industry. This was a jumping-off point for a ferry ride to Pulpit Rock. After two hours marveling at the beauty of another Norwegian fjord, the Lysefjord, we hiked another two hours (pretty much straight up!) to Pulpit Rock. The views along the way, and especially at the top, were incredible.  Even at the time, it felt like looking at a painting.  But I can’t even think or write about being on top of Pulpit Rock without feeling a chest-crushing wave of anxiety.  Like most dangerous places outside the US, there are no ropes, rails, or even caution signs.  And people are doing crazy stuff…604 meters above the water.  Seriously, nothing but air stands between them and certain death and they’re dangling their feet over the edge, cavalierly walking up to it and peering over, doing handstands and other yoga things, having a picnic with toddlers. Crawling babies on a cliff!! The entire time we were up there I was simultaneously thrilled by the experience and convinced that I was going to see someone die. If I’m lucky enough to ever go back, I’d go first thing in the morning when no one else is there or opt for the Troll’s Tongue instead and trade the much longer hike for a little privacy and peace of mind.

Another highlight in Stavanger for us, in additional to defying death on a rocky ledge, was a little local bar that our host called Books and Brews, but is really called something else in Norwegian that I can’t pronounce or remember. The bar is stocked with excellent Norwegian craft beers, which are part of a burgeoning industry spurred on by the talents of a few American brewers, so we’re told, and the playlist rocks everything from motown to Elvis to Sinatra. They also have a shelf stacked with games. Who doesn’t love a bar with games?  S and I spent a great night there testing out Norway’s IPAs and continuing our overly competitive Scrabble feud.  There’s still a heated debate as to who won that game, as we differ over how to score the letter Æ…. Talk about heroes of our own story….

Sognefjord.  Is this not the most beautiful place in the world? 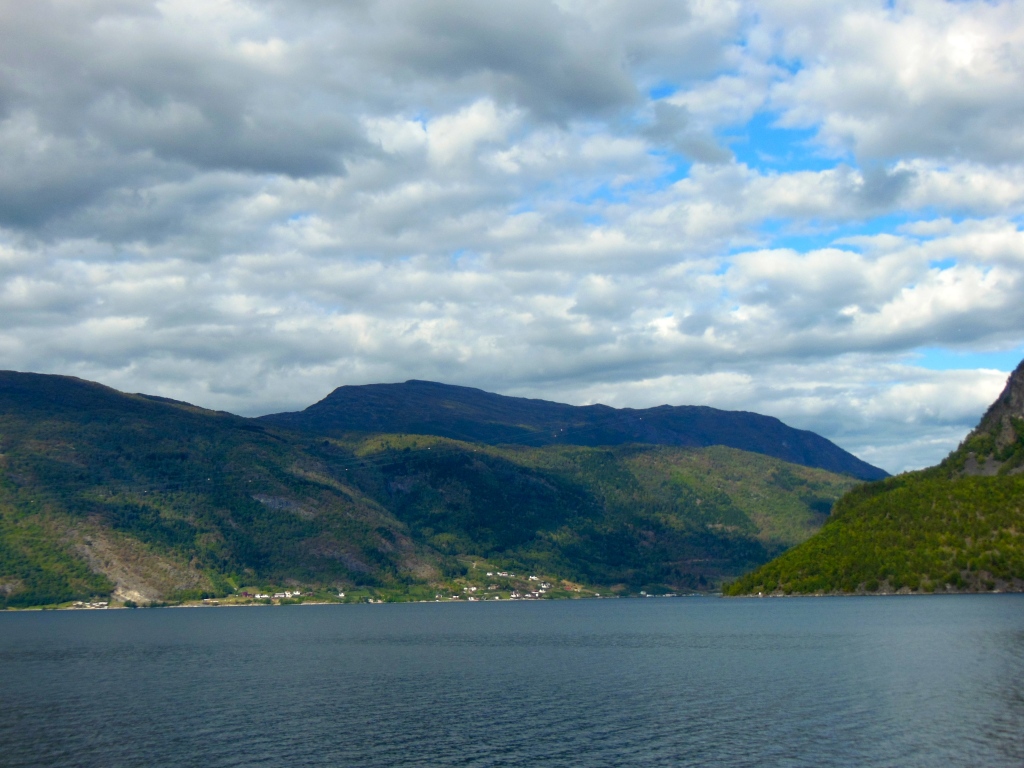 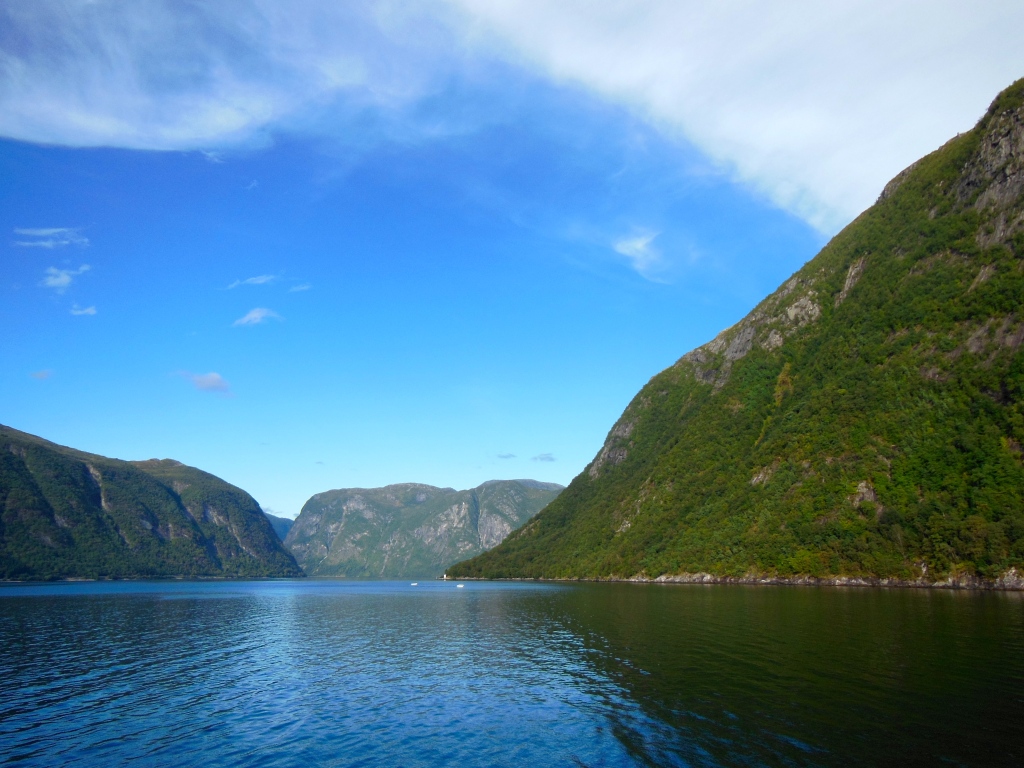 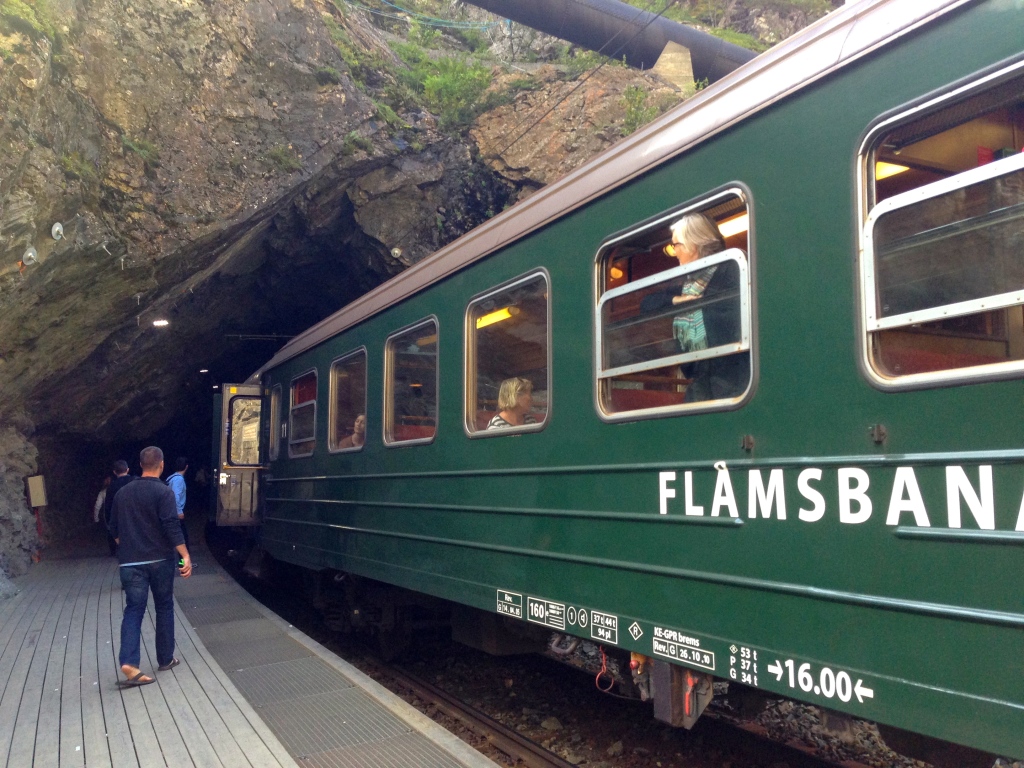 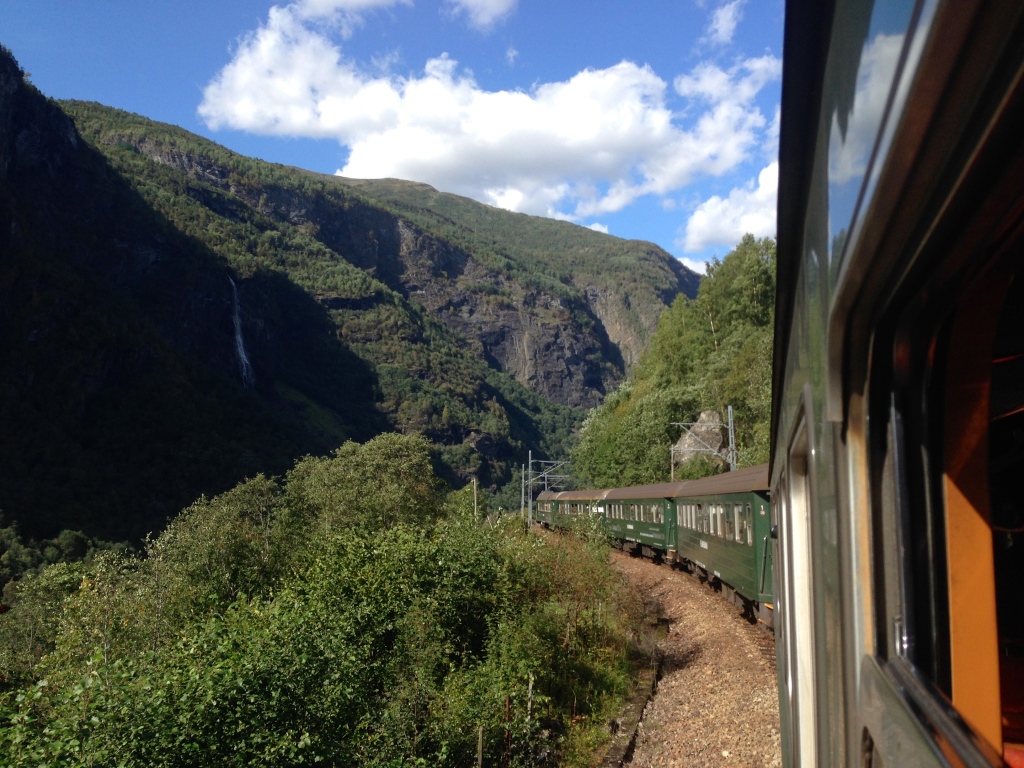 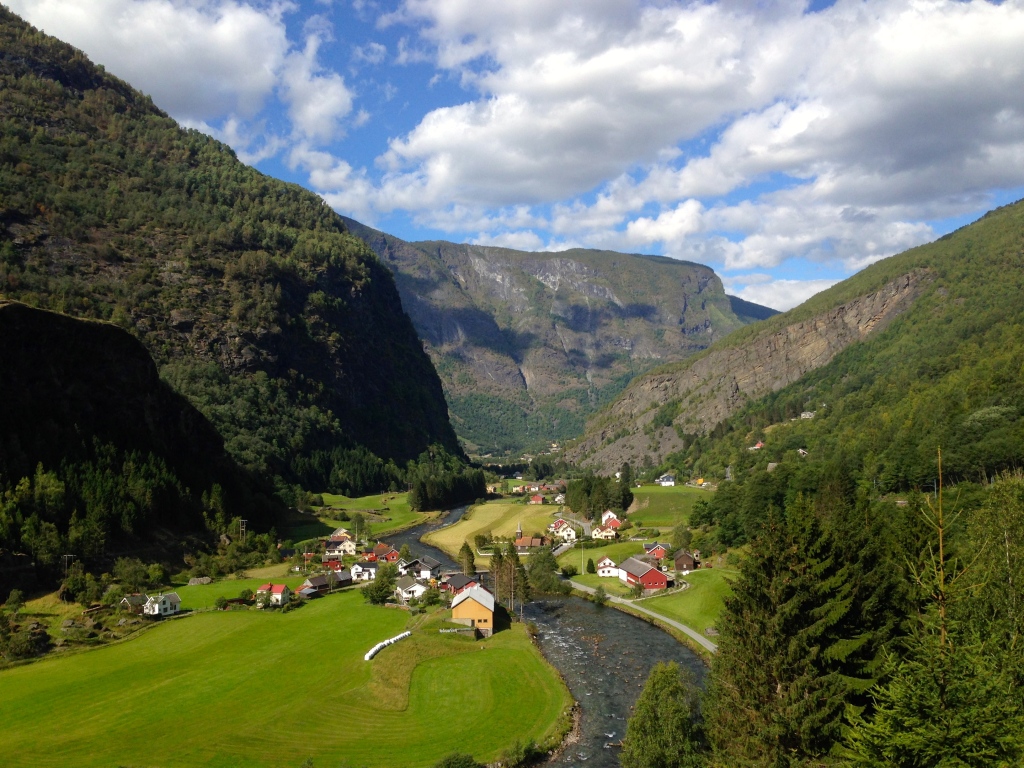 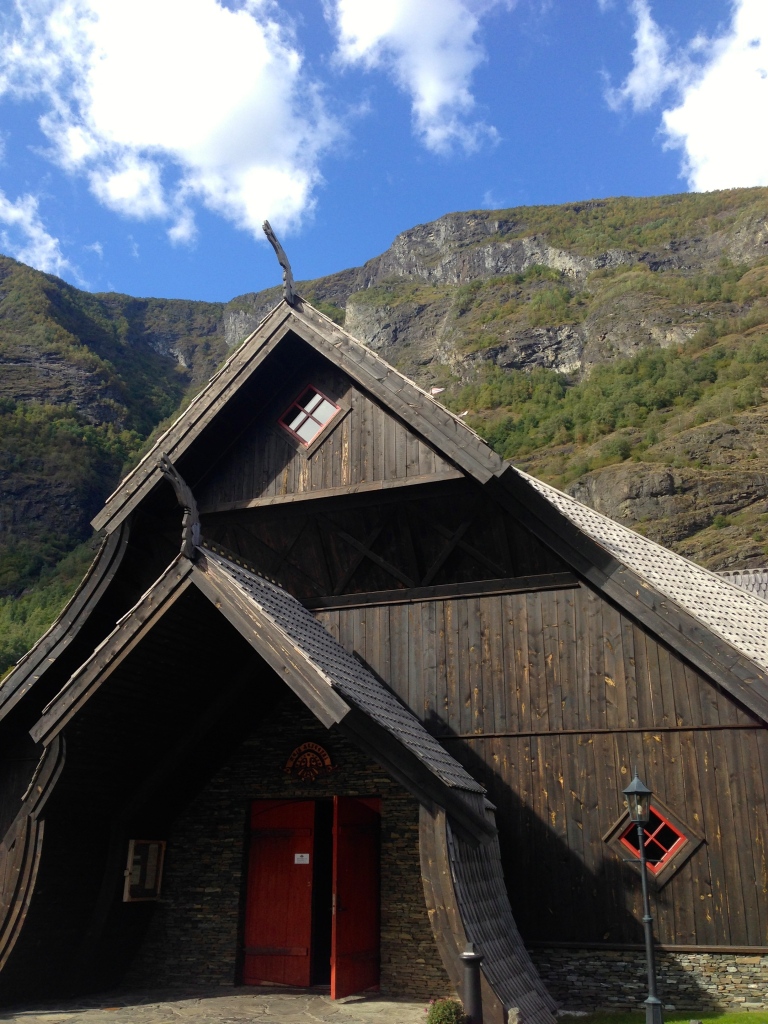 Having an OK time on the Sognefjord 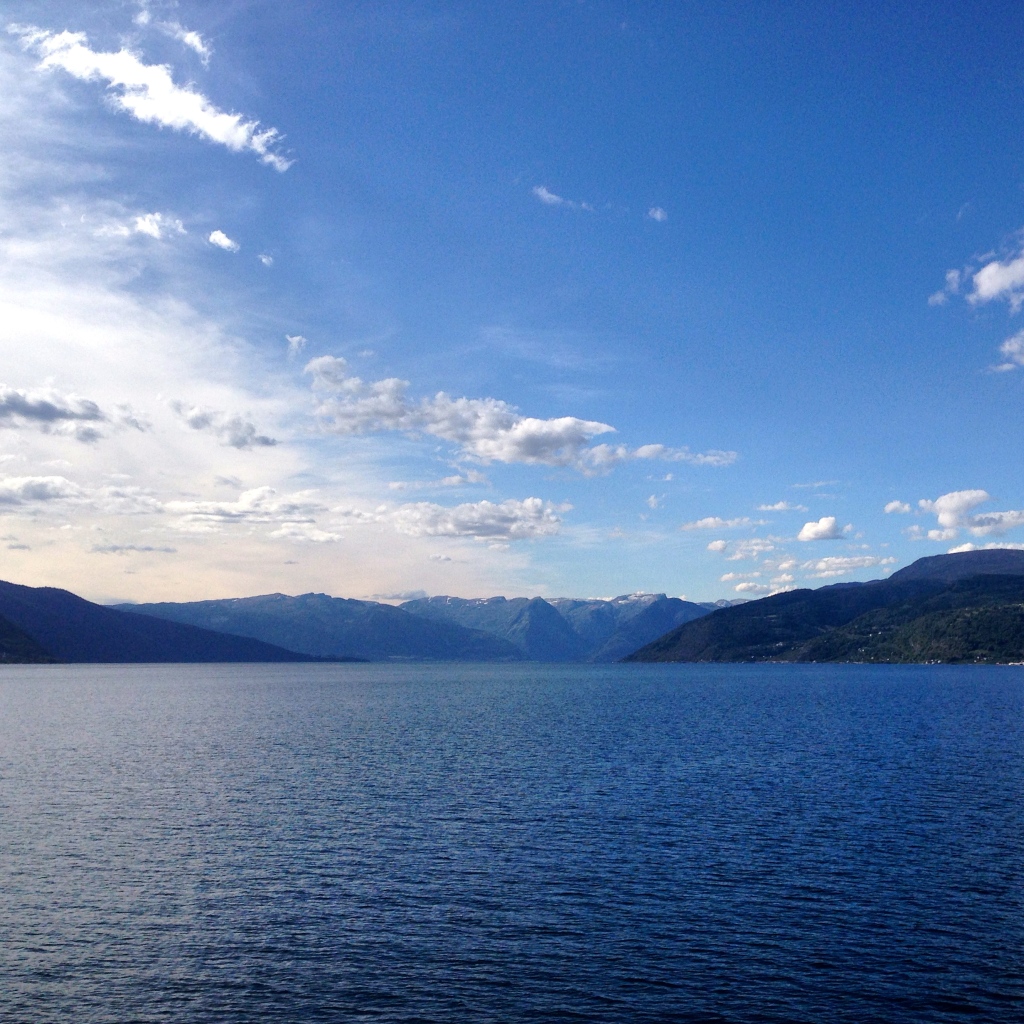 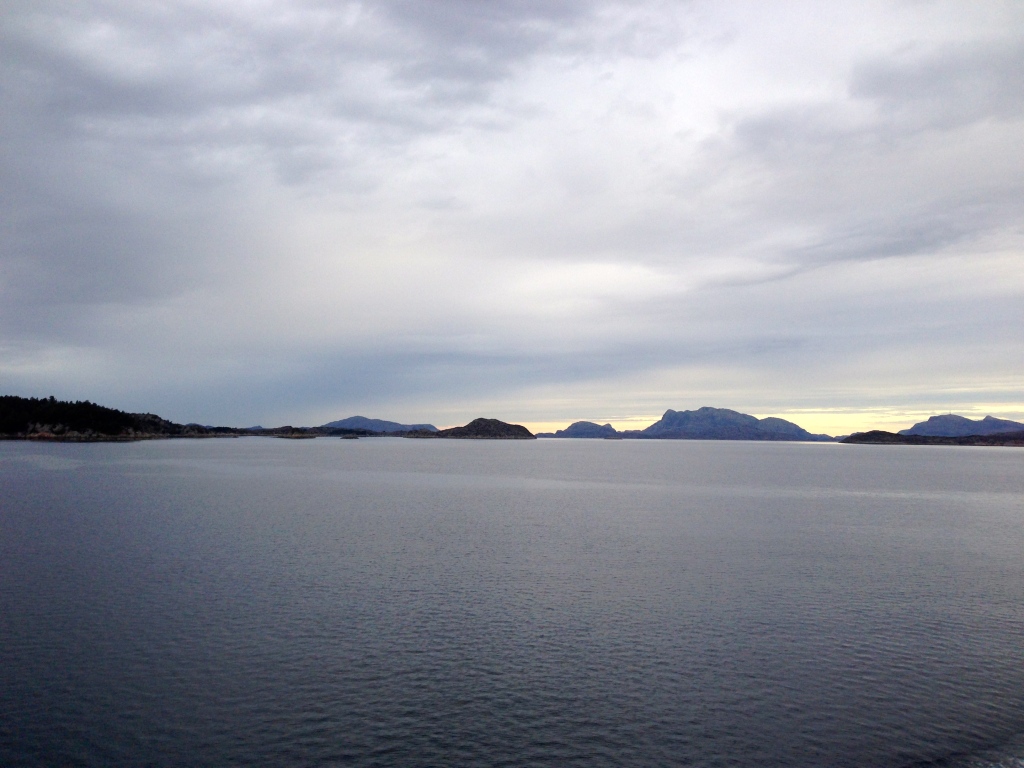 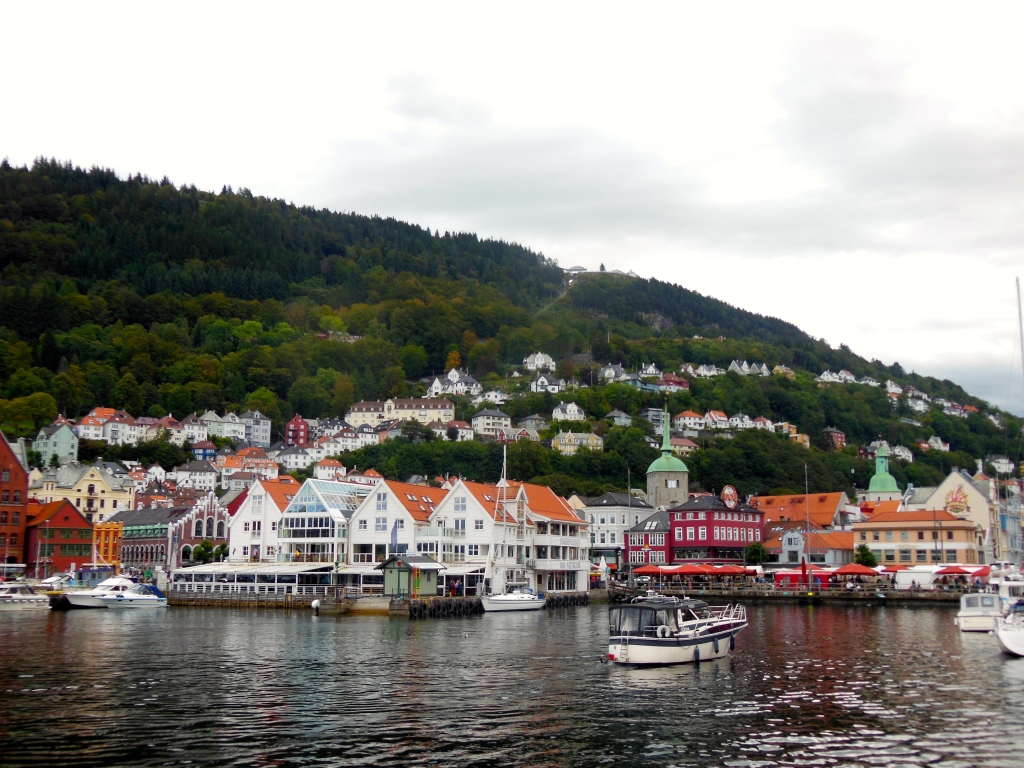 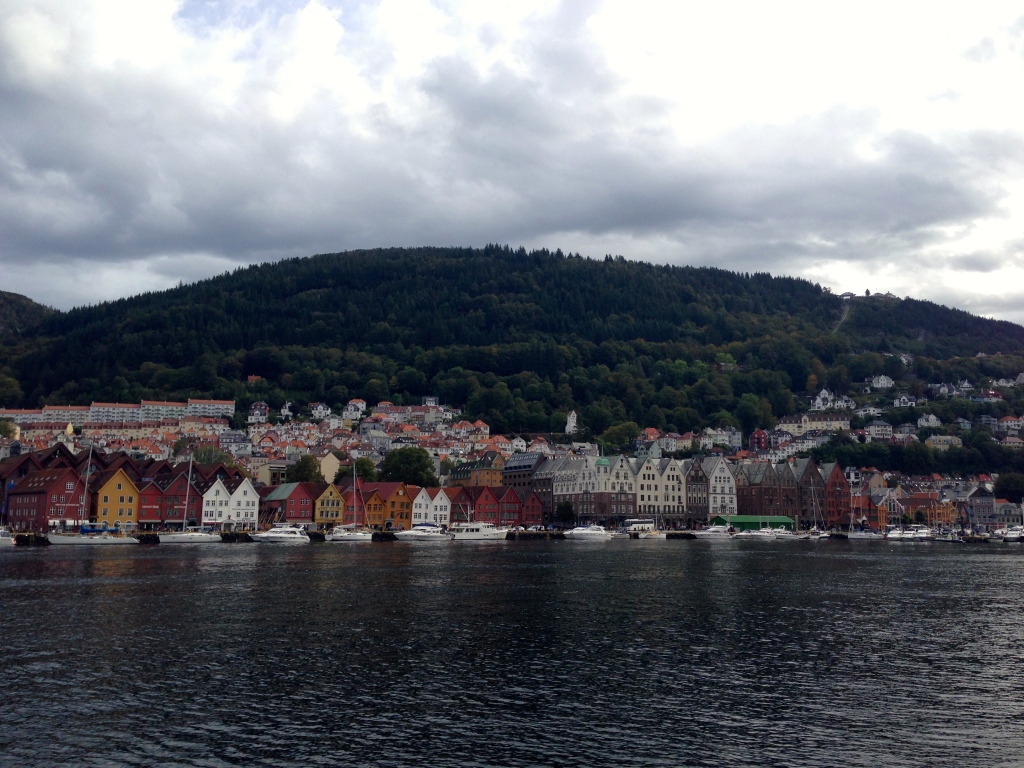 We found our wedding cake topper. 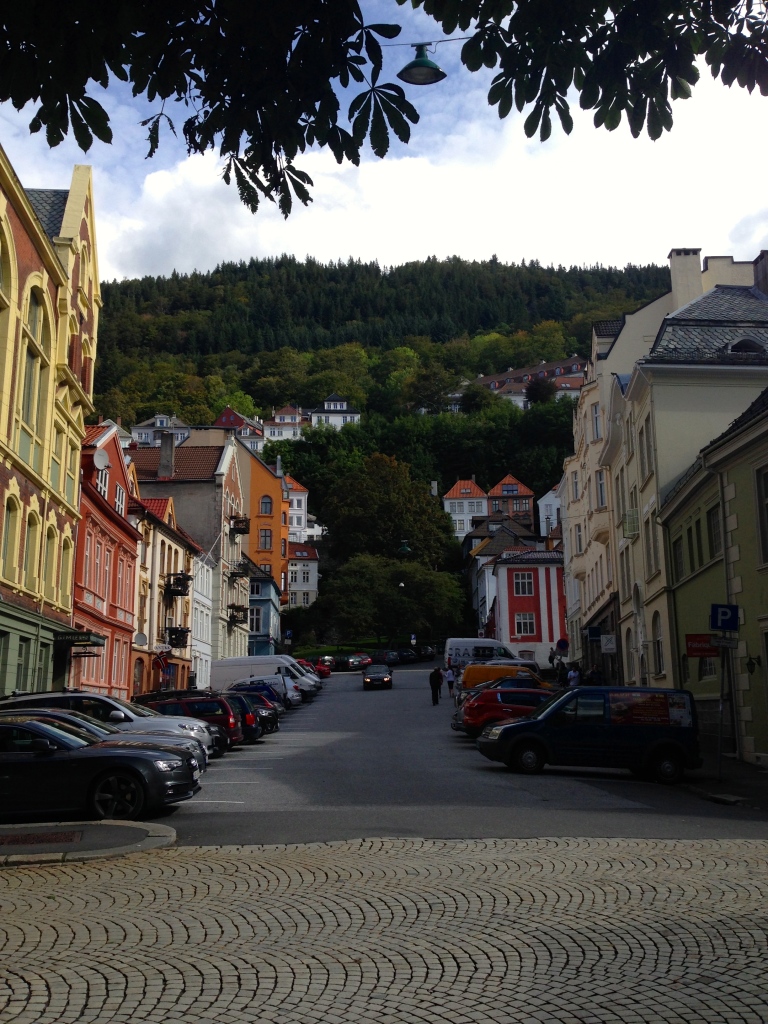 Bergen from up high. 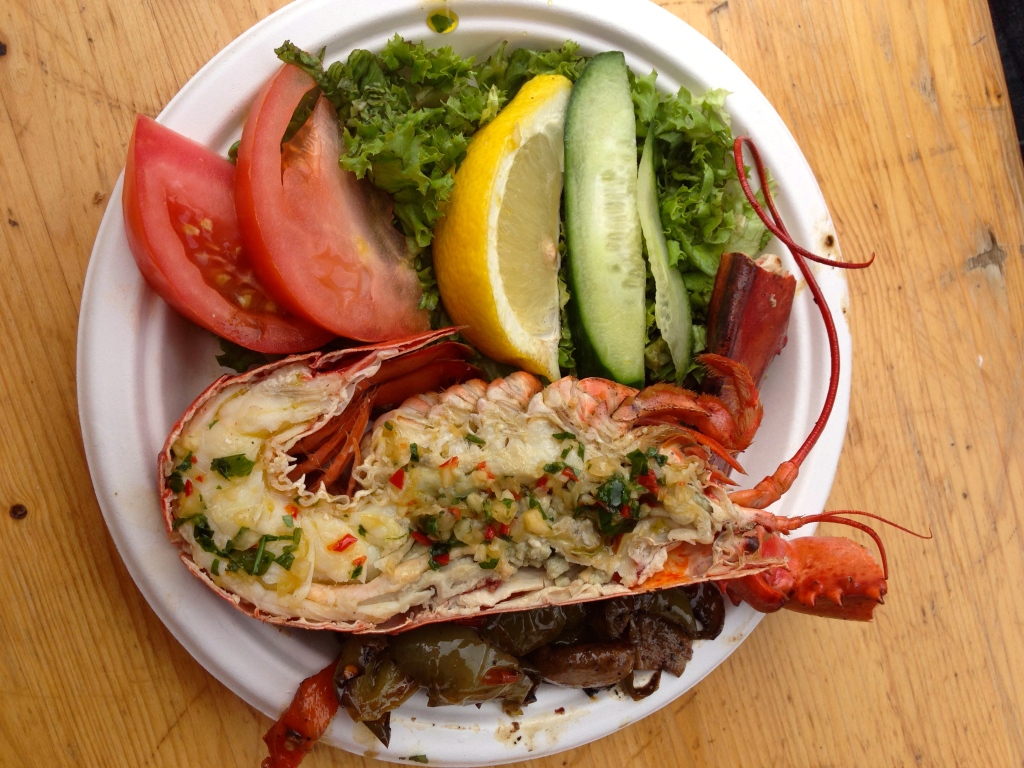 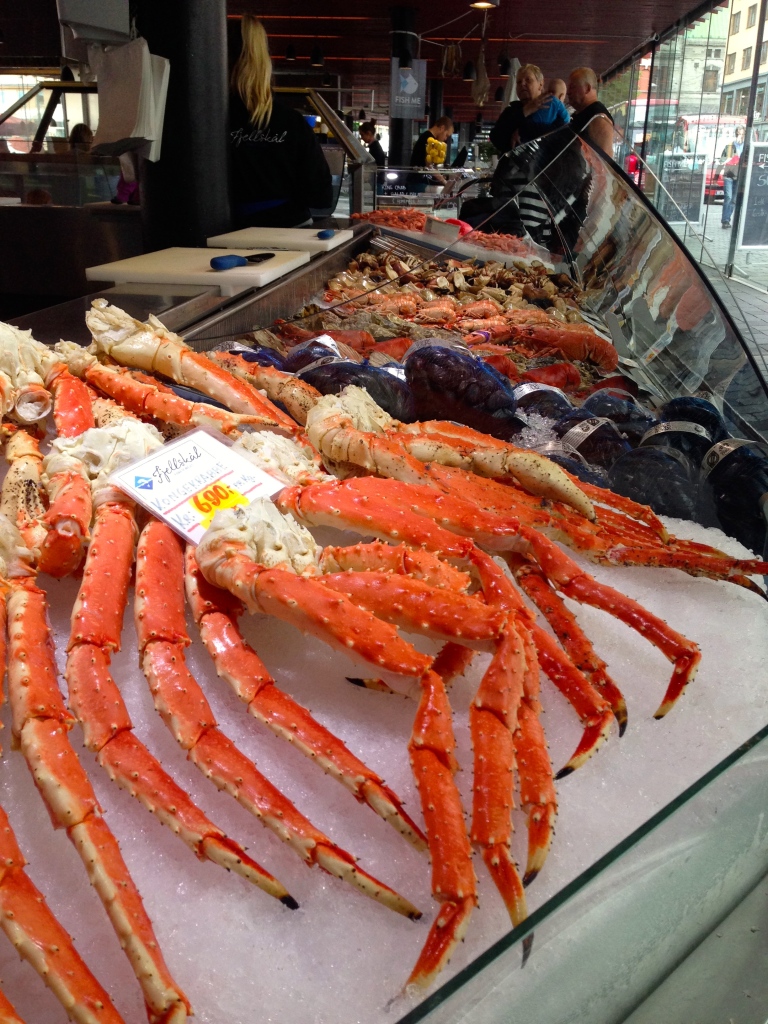 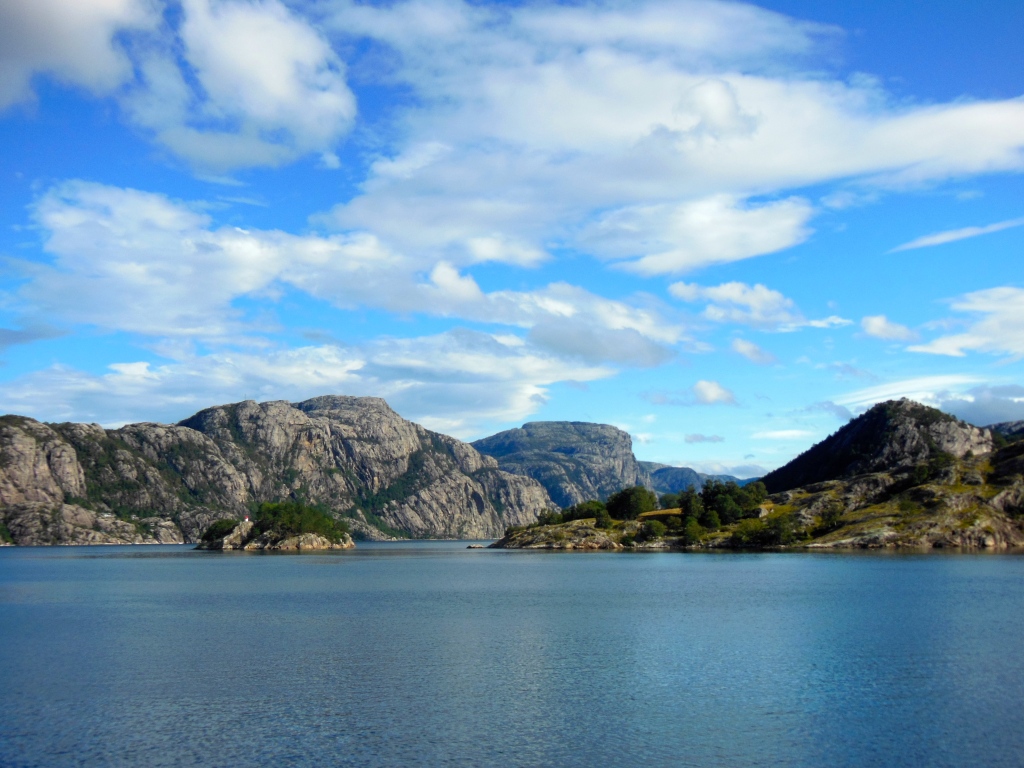 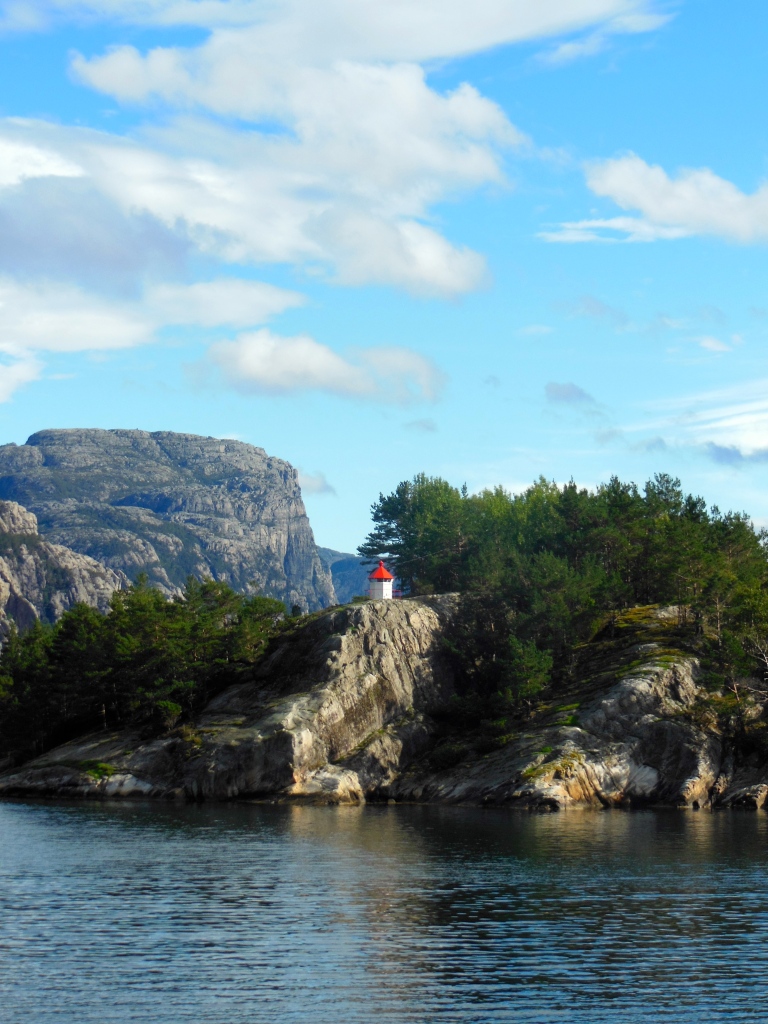 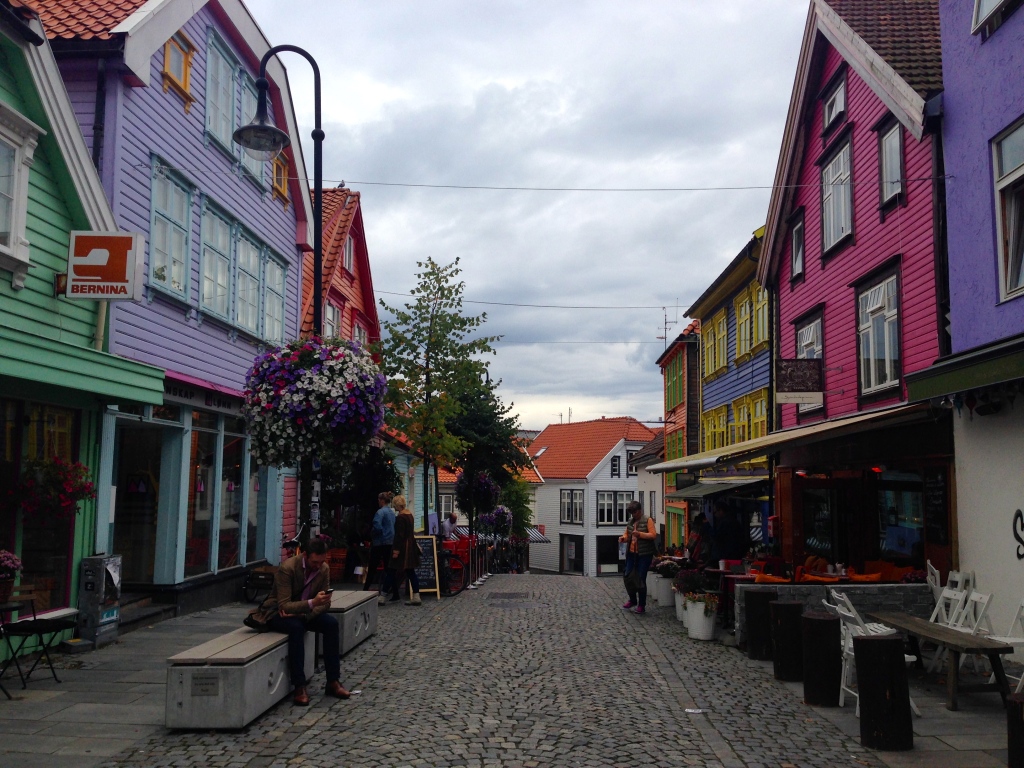 A colorful street in Stavanger and home to Books and Brews.

Stavanger has been named one of the top cities in the world for street art. 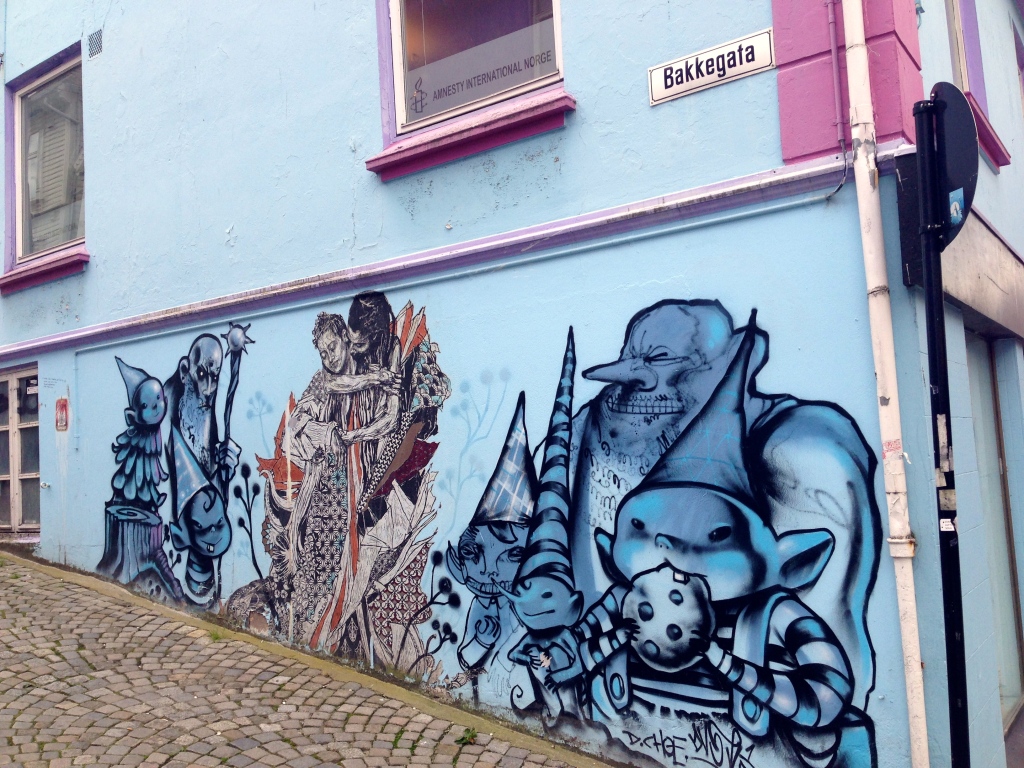 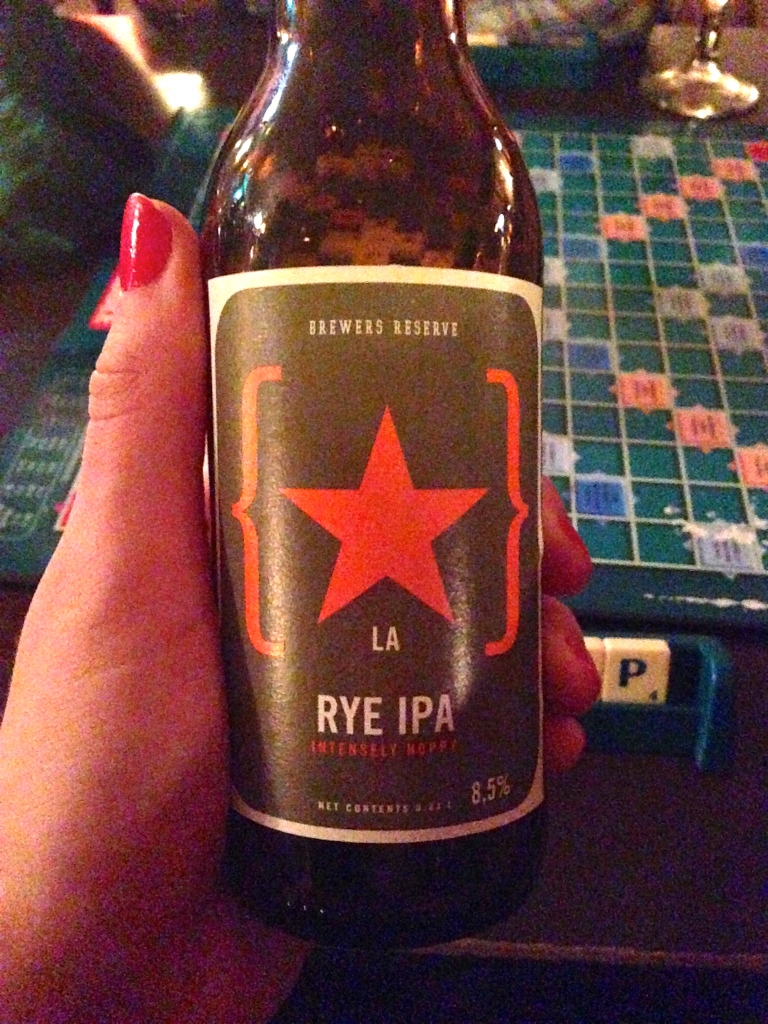 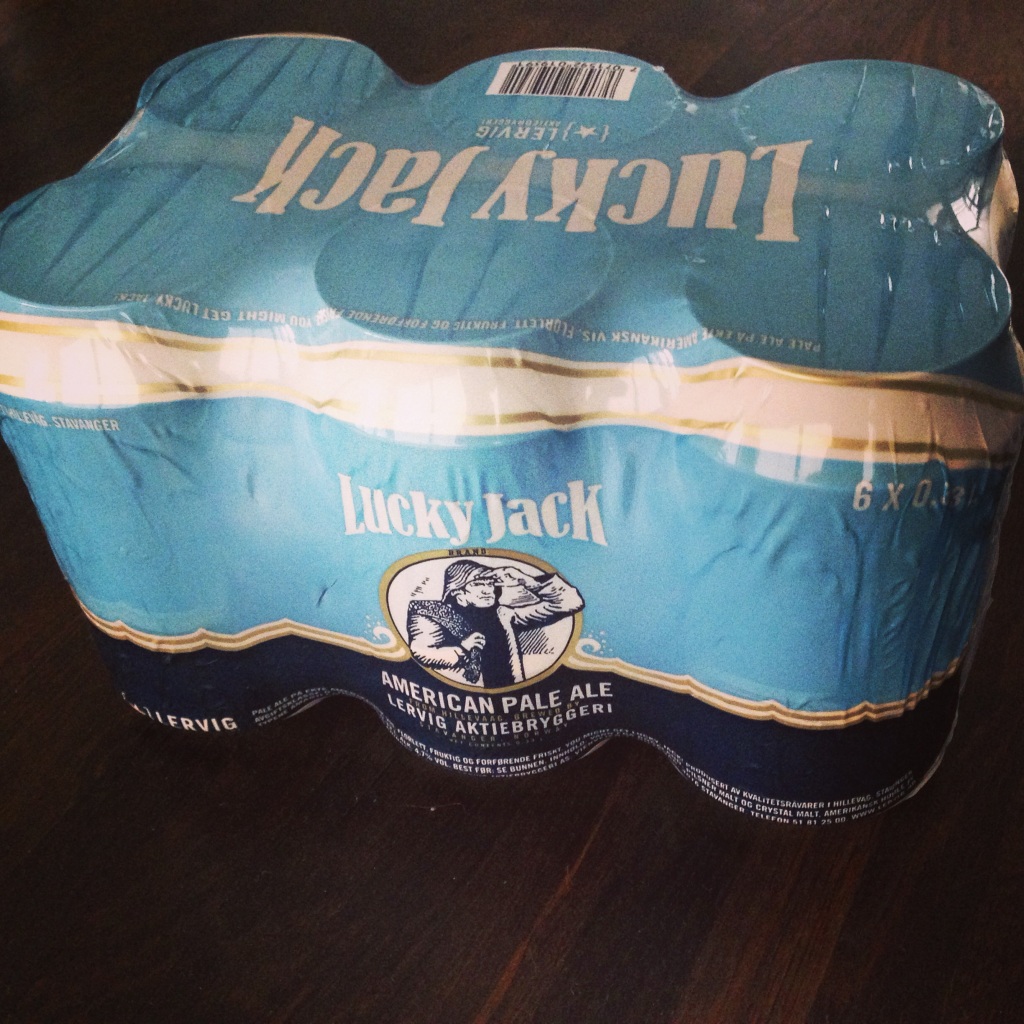 We picked up a few cases of this guy in the airport and never regretted it.

We ate one of the best mussel dishes ever in Stavanger on the waterfront.  That’s moose steak in the background and it was awesome.  And that cheese bread was ridiculous.

Beginning the hike up to Pulpit Rock. 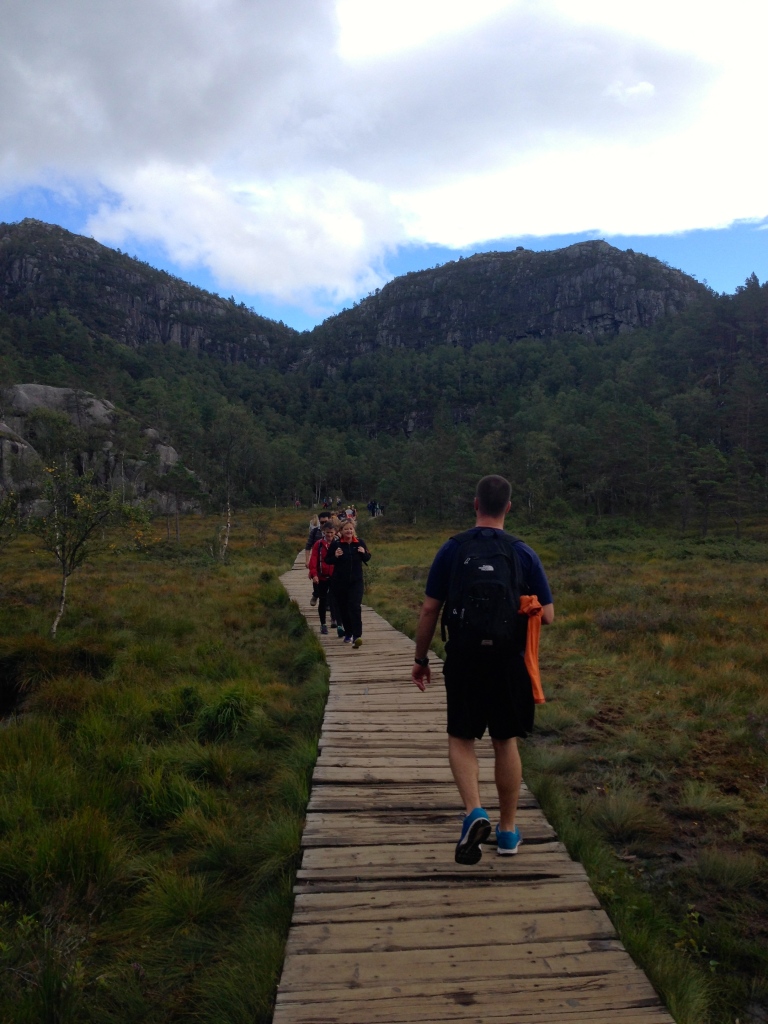 Kind of a steep climb…that went on for 2 hours. Hello, hamstrings. 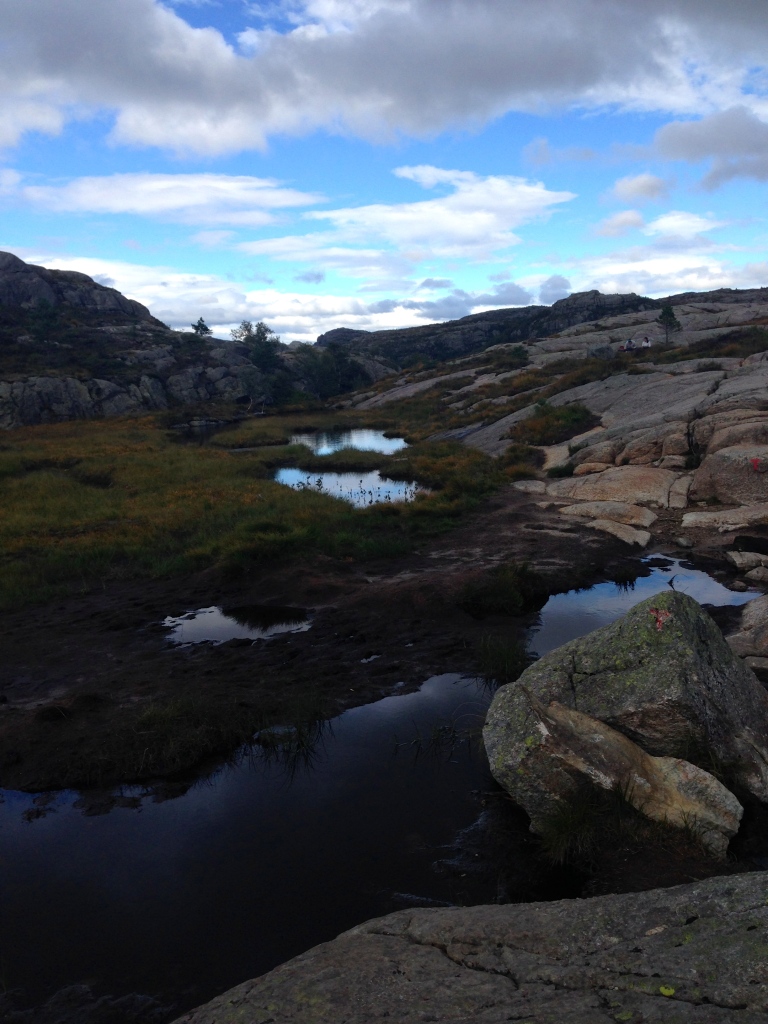 This looks like we’re standing in front of a green screen.

So close to the edge! And a selfie stick.  I can’t handle this picture. 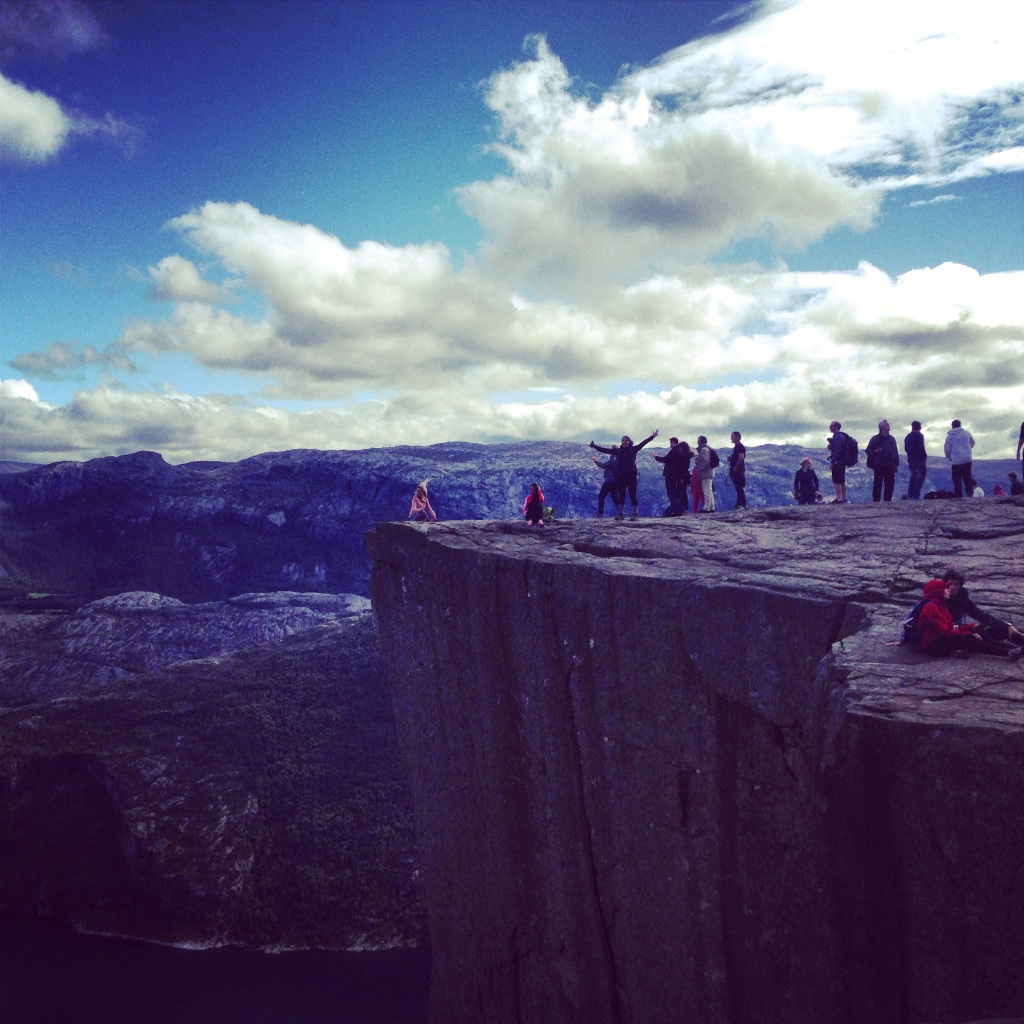 That’s as close as I would get to the edge and I was TERRIFIED!

This is real life. 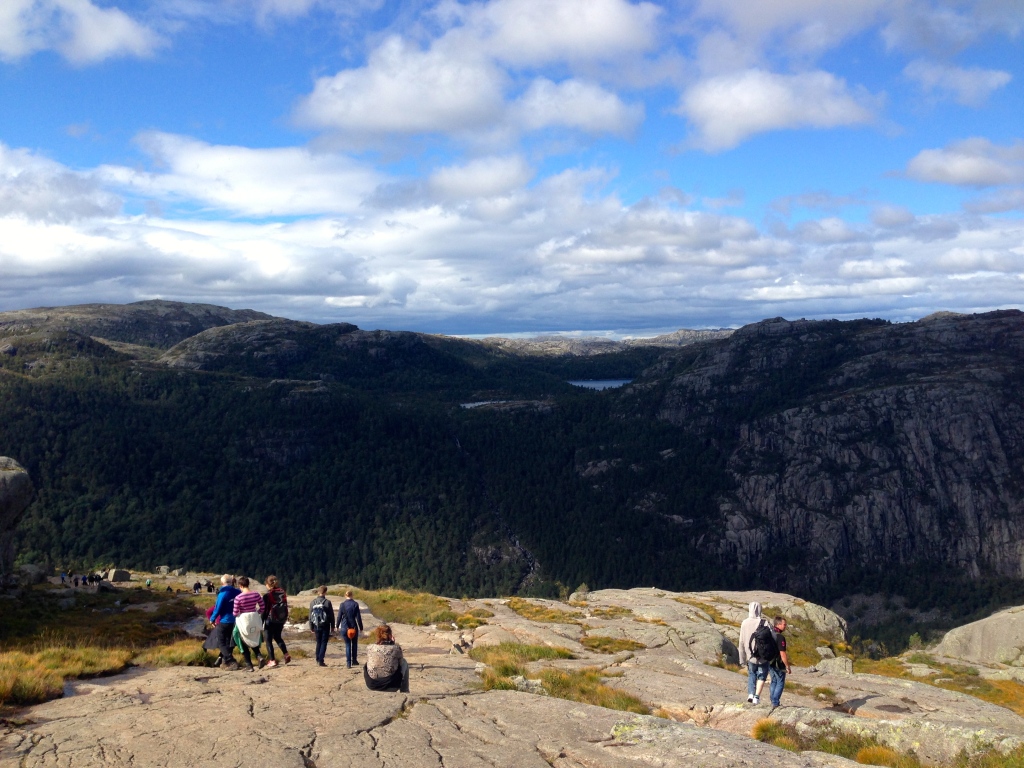 And now I’m ready to go back.  Does anyone have tips on camping and biking in Norway or other camping/biking trips on Europe?  I’d also like a bedtime story about trolls and snow mobile chases tonight.

Travel Tips:  We booked our trains and the Sognefjord cruise through Norway in a Nutshell (we did Sognefjord in a Nutshell).  We found an express bus from Bergen to Stavanger here and the cruise to Pulpit Rock here.