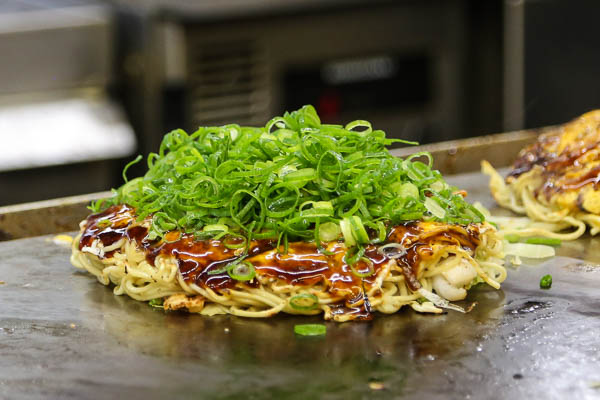 With only 36 hours in Hiroshima City, we carefully hand-picked three of its most representative restaurants for a well-rounded sampling of regional flavors. We would start with the originator of world-famous Okonomiyaki pancakes, Hiroshima’s greatest contribution to the Japanese culinary repertoire, then move onto two tiny family-run eateries, renowned for their seafood offerings for years even before earning their combined three Michelin stars.

MITCHAN SOHONTEN HATCHOBORI HONTEN (Hiroshima)
Address: Hatchobori 6-7, Naka-ku, Hiroshima-shi, Hiroshima Prefecture
Hours: Lunch 11:00-14:30, Dinner 17:30-21:00; Closed on Wednesdays
Map: from Google Maps
Directions: From the Hatchobori tram stop, walk north for 150m along the main Chuo-dori thoroughfare then turn left at Kyobashi-dori. Mitchan is about 30m down the street on the right side. 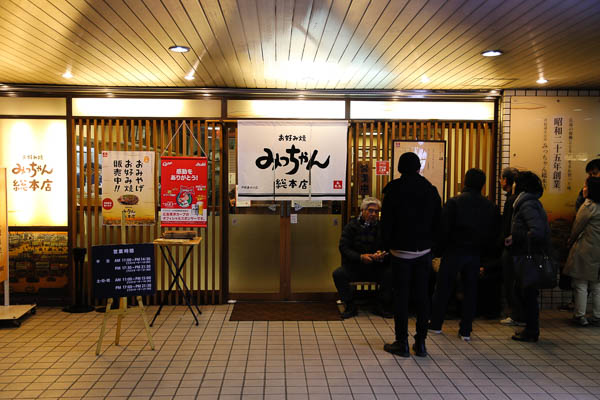 To 1700 Okonomiyaki restaurants in Hiroshima Prefecture alone, this is the granddaddy of them all … or at least that’s the story according to the legendary Ise Mitsuo, a.k.a. Mitchan, who took over his father’s scrungy little Yatai stand in 1950 and largely formulated what has since become the undisputed soul food of all Hiroshimans. Nowadays three related chains bearing the name of Mitchan, all headed by different family members, scatter throughout the city and even delivers DIY Okonomiyaki across Japan for connoisseurs who don’t mind paying 6000 yen plus shipping for four pancake kits. 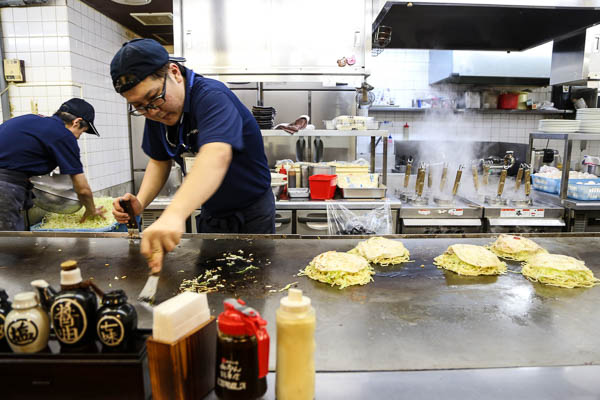 While Yatai carts have long been eradicated by city officials, Mitchan Sohonten has since ascended to the pantheon of nationally-famous restaurants in spite of, or perhaps due to, its narrow focus on the few items it does better than almost anyone else. With legions of fans prepared to endure insane queuing times every night, we arrived shortly after its opening hour of 17:30 and still waited 30 minutes for two coveted seats at the greasy Teppanyaki counter. 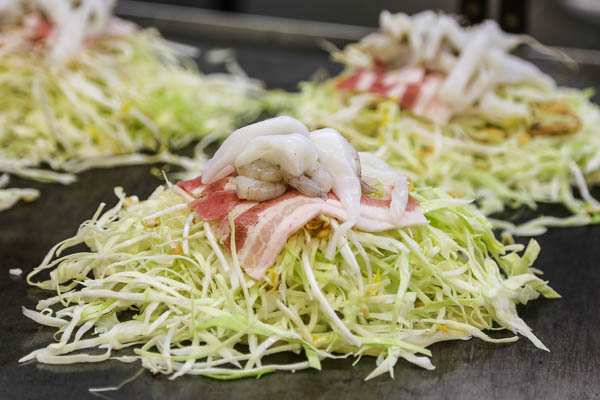 Compared to mixed (i.e. Kansai-style) Okonomiyaki ubiquitous all over Japan, Hiroshima’s version is a canvas of layered edible art typically kicking off with a thin crepe at the bottom before various combinations of ingredients — sliced cabbage, bean sprouts and pork belly according to the original recipe — are piled on top of the mound. 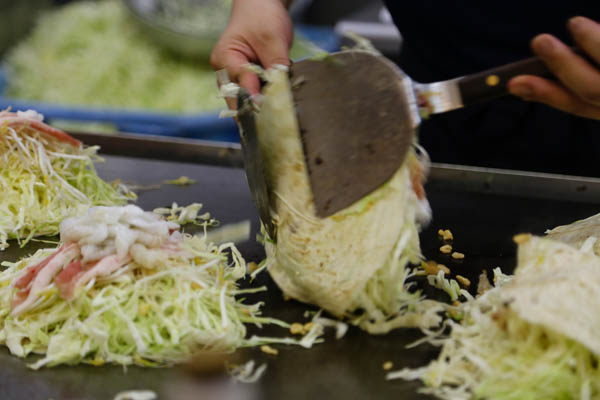 Once the crepe starts to brown, the entire stack is flipped upside down to allow the pork belly to sear while the crepe tents and steams the cabbage. Tenkasu, or Tempura batter bits, is tossed in for extra crunchiness in a curious local tradition dating back to the impoverished 1950s when Okonomiyaki was first conceived as a cheap, newspaper-wrapped takeout in post-A-Bomb Hiroshima. 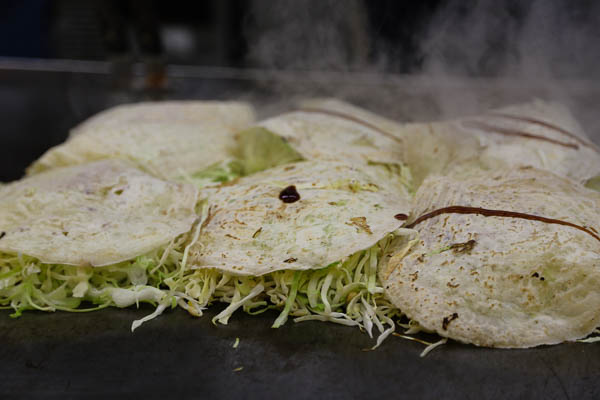 While the cabbage steams away underneath the crepe, other chefs down the assembly line would be blanching Yakisoba and Udon noodles, stir-frying them on the Teppan and brushing the finished crepe stacks with gooey Okonomi sauce. These four chefs would churn out an incredible 1000 Okonomiyaki pancakes a day on weekends at a level of industrial efficiency worthy of the nearby Mazda production plant. 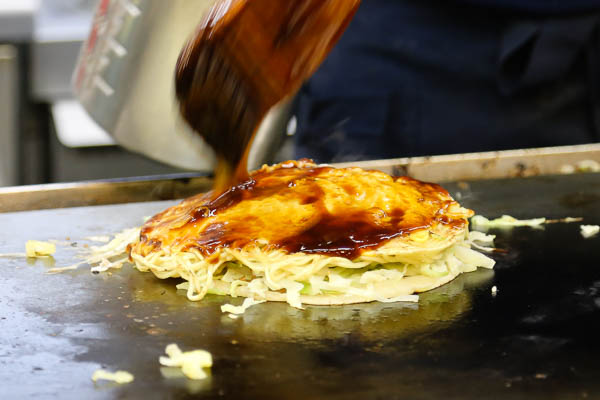 Last but not least, each pancake would be anointed with a copious slathering of Okonomi sauce, always the signature of any Okonomiyaki joint. Said to have been invented by Mitchan himself in the 1950s when he decided to replace Worcester sauce with the unwanted viscous gloop leftover from sauce production, Okonomi sauce has since gained such a religious following in Hiroshima that it has its own museum at the headquarter of Otafuku, the largest Okonomi sauce maker in Japan. 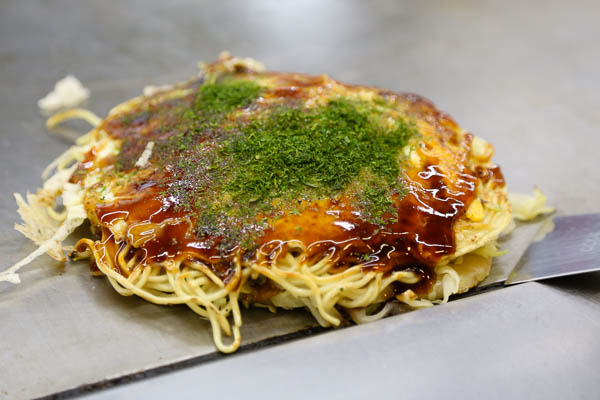 After a generous dusting of powdered seaweed, the finished Okonomiyaki would be slid along the hotplate to the ordering customer, who may choose to drench the pancake further with an additional layer of Kewpie mayonnaise. Pictured above was our order of a seasonal specialty known as Kaki Soba Nikutama, a restaurant shorthand for oysters, Yakisoba noodles, pork belly and eggs. The salivating acidity of Okonomi sauce — coupled with the aroma of charred seafood on the Teppan — was too tempting to resist diving in immediately with the iron spatula. 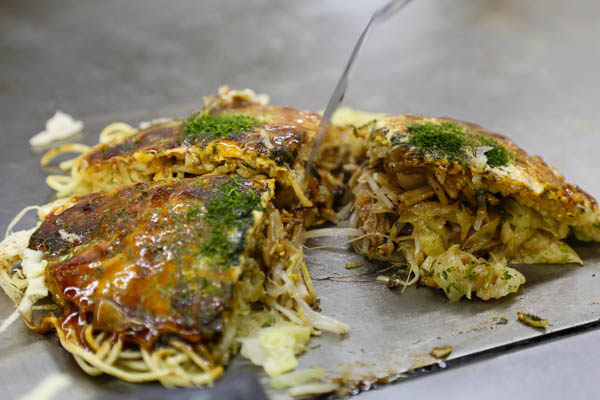 That’s when I made the rookie mistake as a first-timer in Hiroshima.

In the past I had only been exposed to Kansai-style Okonomiyaki, spearheaded by no-nonsense Osakans who had taught me to cut their pancakes into pizza-like wedges. But a quick look around the room and I realized my faux pas — our Hiroshiman neighbours all cut theirs into little squares with 90-degree cuts. But it hardly mattered as everyone including ourselves were too blissfully indulging in these messy pancakes, so much so that we had half-finished ours before realizing that …

… I had entirely forgotten about the Mayo! 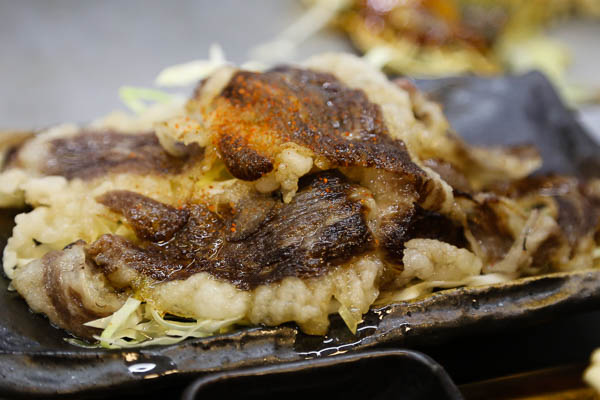 The presence of oversized Teppan hotplates automatically qualifies most Okonomiyaki joints as Teppanyaki restaurants, each with its own house specialties ranging from 200-yen bean sprouts to A5-rank Wagyu beef. At Mitchan Sohonten the crowd favorite turned out to be a mysterious cut of beef known locally as Koune which, if I didn’t completely misunderstand, came from the armpit of the cattle’s forelegs. While the texture was a little more fibrous than expected, these paper-thin slices of beef were well-balanced with fat drippings and seasoned so boldly with Shichimi pepper that it was just the perfect match for a cold bottle of Asahi. 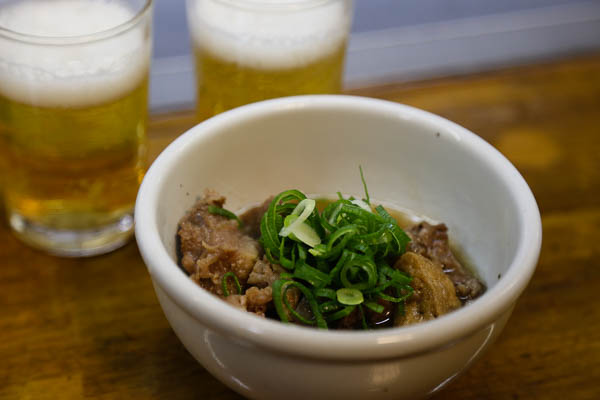 After a premium Okonomiyaki, a Teppanyaki dish of Koune beef, some slow-braised beef tendons, stir-fried vegetables and a bottle of Asahi to share, our bill tallied less than 1800 yen (CAD$21) per person, quite reasonable considering Mitchan Sohonten’s immense popularity among Hiroshima’s Okonomiyaki connoisseurs. My next challenge would be to produce a passable Hiroshima-style Okonomiyaki at home — I thought I was starting to figure out the Kansai version, but our visit to Mitchan has just set the bar impossibly high.

If the price-quality-ratio of Mitchan Sohonten appealed to you, our next eatery offered perhaps an even better deal of top quality seafood, at the heart of Hiroshima and without massive line-ups. And the kicker is … we’re talking 2500 yen (CAD$29) for a multi-course meal at a Michelin starred restaurant.

TAKOTSUBO (Hiroshima)
Address: Horikawa-cho 4-19, Naka-ku, Hiroshima-shi, Hiroshima Prefecture
Hours: Lunch 12:00-14:00, Dinner 17:00-22:00; Closed on Wednesdays
Map: from Google Maps
Directions: From the Hatchobori tram stop, walk south for one block along the main Chuo-dori thoroughfare then turn left into the covered arcade of Ebisu-dori. Takotsubo is about 20m down the arcade on the right side. 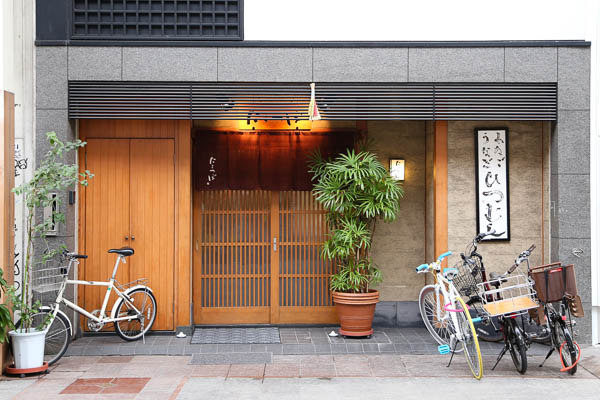 Specializing in time-honoured recipes for local seafood from the Seto Inland Sea, Takotsubo is a small family-run eatery that has risen to Michelin-star status amongst fierce competition in central Hiroshima. Gracing its understated storefront is the Kanban signage pronouncing its claim to fame — charbroiled Unagi and Anago eels in savory sauce, served in decades-old rice buckets that speak to Hiroshima’s long history of scrumptious peasant dishes, long before the invention of Okonomiyaki. 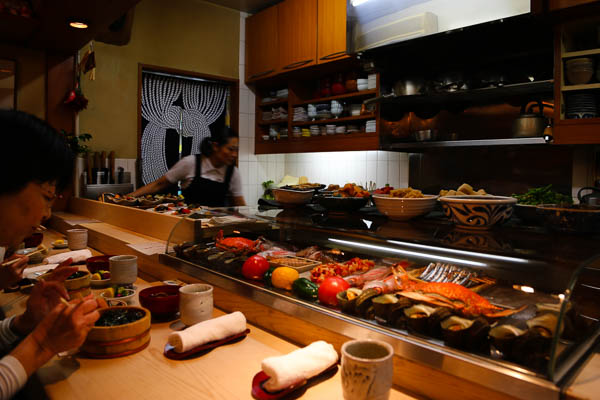 Behind the latticed sliding door is a claustrophobic space with no tables and a small L-shaped counter that barely seats a dozen diners, and only if everyone gets real cozy. Like most of the local clientele we did make reservations ahead of time, a necessity for its exquisite 10+ course dinners and recommended even for informal lunches, popular apparently with hungry shoppers from the neighbouring Mitsukoshi Department Store. 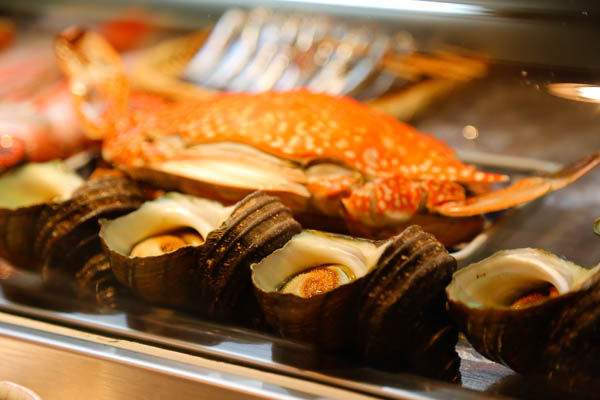 Lavish ingredients such as Watari crabs and gigantic Sazae conches, ready to be steamed inside their own shells in Tsuboyaki style, filled the display case alongside blue-collar favorites such as fresh sardines and Shishamo smelts. 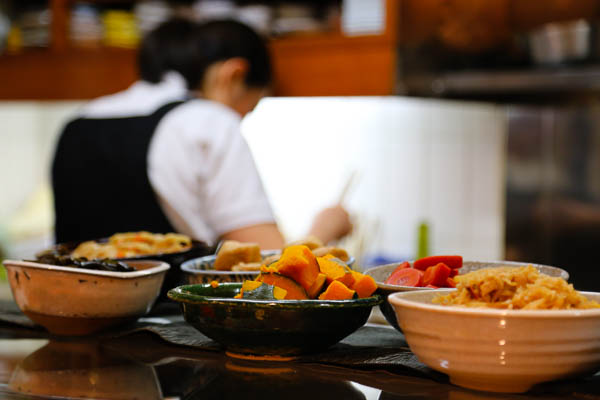 Among Takotsubo’s signature dishes are bowls of vegetables and tofu derivatives sitting atop the counter, all slow-simmered in the restaurant’s famous Dashi broth also used as base flavour for the more expensive features in the evening. While every neighbourhood Shokudo serves its own variant of Yasai-no-Nimono, few restaurants acquire the top quality Kombu kelp and Katsuobushi shavings needed to elevate this homemade dish to classy Ryotei level. 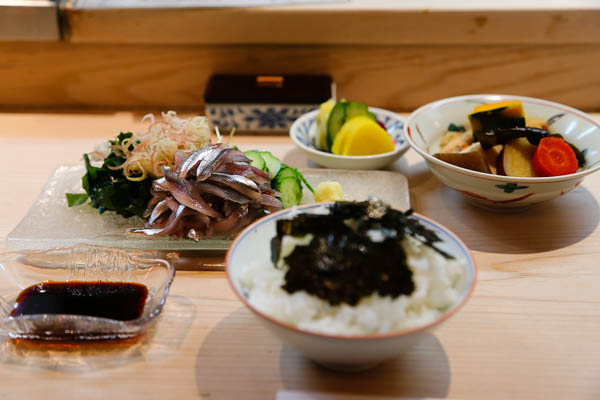 It’s not as expensive as it looked. While 15-course Omakase dinners averaged around 15000 yen (CAD$175) per head, our lunchtime specials — four course affairs featuring an entrée, simmered vegetables, rice with Tsukemono and soup — were relative bargains starting at 2500 yen (CAD$29) for Sardine Sashimi and 2700 yen for the legendary Hitsumushi, or Charbroiled Eels in Rice Buckets. 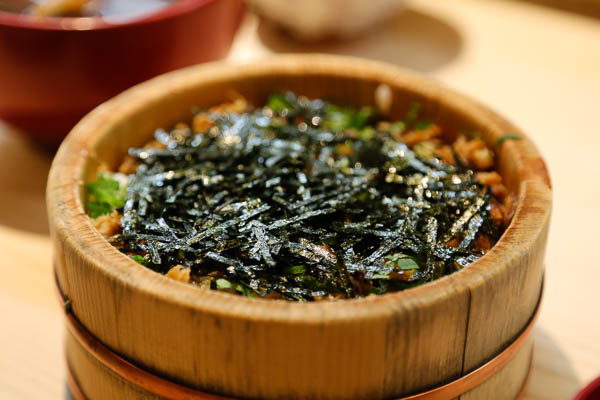 Between the choices of Anago (saltwater eels) or Unagi (freshwater eels) for Hitsumushi, my wife picked the Unagi which arrived charbroiled in smoky Kansai style and smothered in shredded seaweed, green onions and Wasabi, similar to Nagoya’s Hitsumabushi but without the green tea for making rice porridge as a final step. Despite the sheer volume of the bucket, my wife, normally a small eater, somehow found the appetite to finish the entire Hitsumushi all by herself. This was certainly the best Unagi of our trip, though the best dish of the meal was still to come. 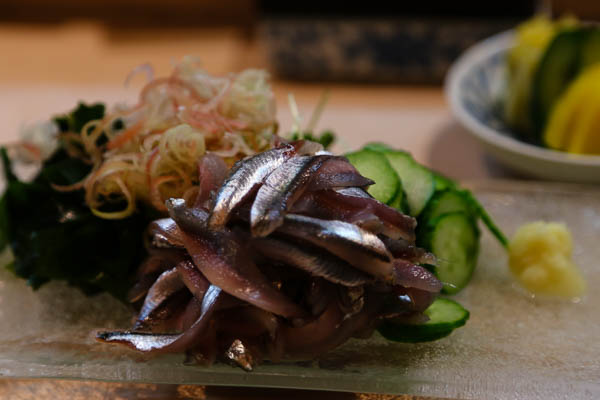 Look at the semi-translucent flesh and brilliant metallic shine of these little sardines, certainly among the freshest Hikarimono — Japanese culinary term for any silver-skinned fish — I have ever tasted. Painstakingly deboned by hand and meticulously rinsed one by one to remove any slimy residue off the skin, this simple dish of Ko-Iwashi Sashimi became one of my favorite memories of Hiroshima. 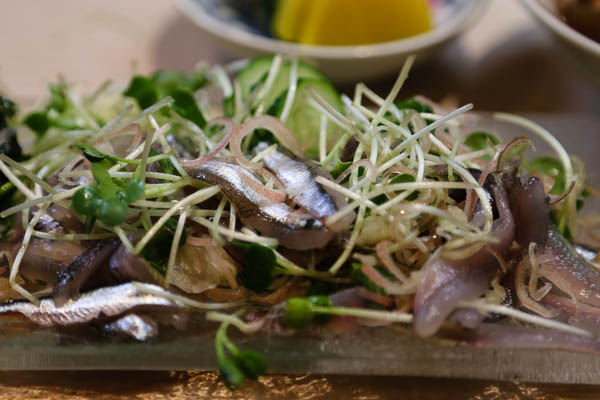 Served with refreshing Kaiware sprouts, seaweed and grated ginger, these lowly sardines turned out astonishingly fresh and mild with absolutely no hint of lingering fishiness. For a self-proclaimed foodie this was a gastronomic epiphany that forever changed my perception of a humble fish oft relegated to canned food in the Western world. 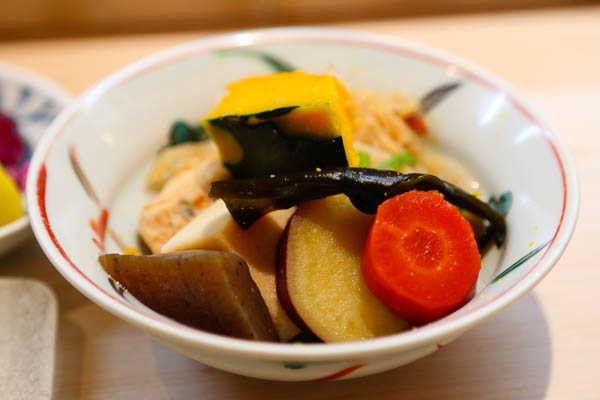 That’s not all — each lunch set also came with a generous bowl of the aforementioned Yasai-no-Nimono, gently re-simmered and infused with Umami flavors from the superb Dashi broth. Spongy Koya-dofu, Hanpen fish cakes, Satoimo potatoes, Kabocha squash, Kombu kelp, carrots and tofu-skin pouches all combined for a homey dish similar to the ubiquitous Oden at any neighbourhood Izakaya, but at an uncompromised quality worthy of the best Obansai specialist restaurants in Kyoto. 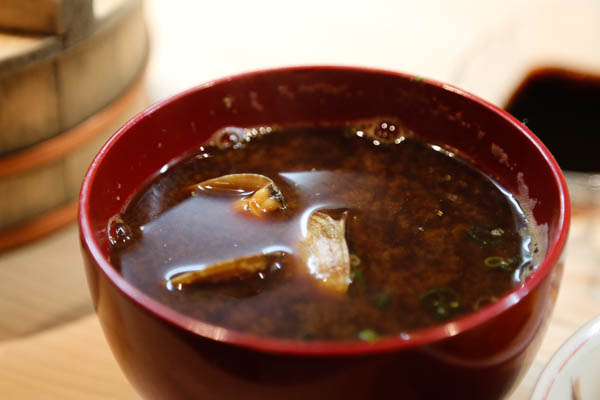 Another excellent feature of the lunch set was a dark Aka-dashi soup, generously brewed with a deeply aromatic Aka-miso and steeped with several large Asari clams for a deliciously complex, almost coffee-like aftertaste. 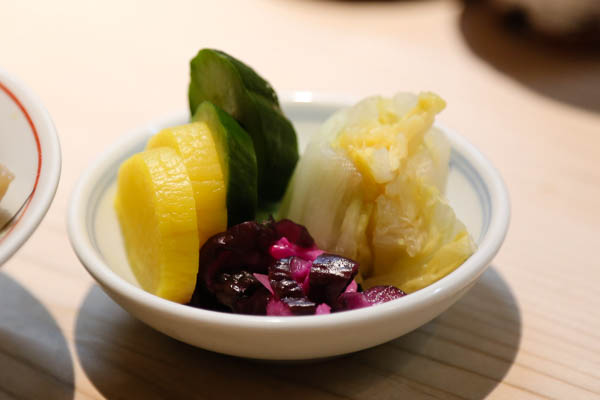 Even the Tsukemono pickles were first-rate in this discounted lunch that teased with Takotsubo’s Michelin-starred offerings at a small fraction of the dinner price tag. Assuming that the Yasai-no-Nimono and the soup cost about 700 and 300 yen respectively, we’re looking at only 1500 yen (CAD$17.6) for the entrée of Sardine Sashimi and 1700 yen for the celebrated Unagi Hitsumushi, certainly bargains at this fantastic quality … Michelin stars or not.

This concludes our foodie tour of Hiroshima, covering the mecca of Okonomiyaki pancakes, one of the city’s premier seafood specialists, a Michelin 2-star Tempura chef reviewed in the previous post, and arguably Japan’s best-known specialist restaurants for Anago eels and oysters at nearby Miyajima. 4 days in Hiroshima Prefecture and 16 days spent on this slow trip of West Japan, and we barely scratched the surface.

Memories of War – and Peace – in Hiroshima