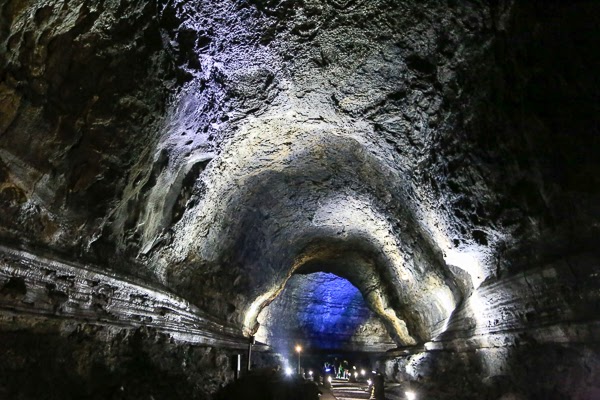 Is this even possible?

Now I’m certainly not advocating traveling all the way to breathtaking Jeju-do — UNESCO World Heritage Site and seafood capital of Korea — and spending just one or two nights. That’s just shortchanging yourself. But for most independent travelers, vacation time is always too short and the optimal itinerary always abounds with difficult choices. 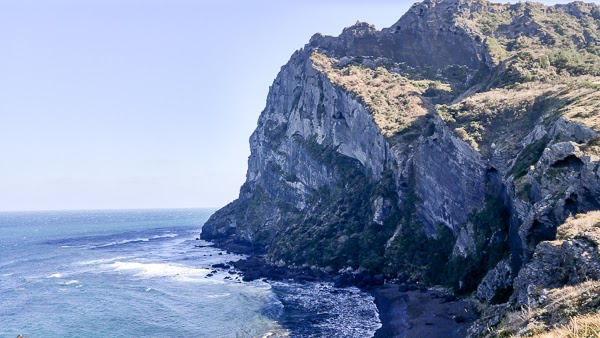 As for ourselves, we spent four nights in the Korean tropical paradise and still didn’t see everything we wanted, despite maximizing our sightseeing time everyday and racking up nearly 400 km on our rental car. But looking back we realize that most of our favorite spots were packed into Day 3, hence this article, both as documentation of a most memorable day and as reference for fellow independent travelers. 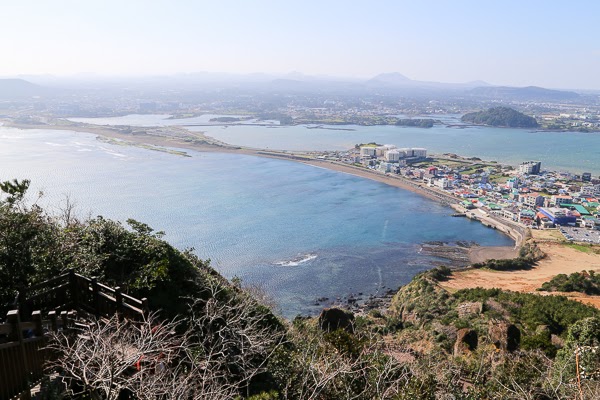 But what I consider essential may be a waste of time for someone else, and vice versa. Forget the likes of Love Land or the Teddy Bear Museum. My own definition of essential is a little stricter:

All packed into one 12 hour day. 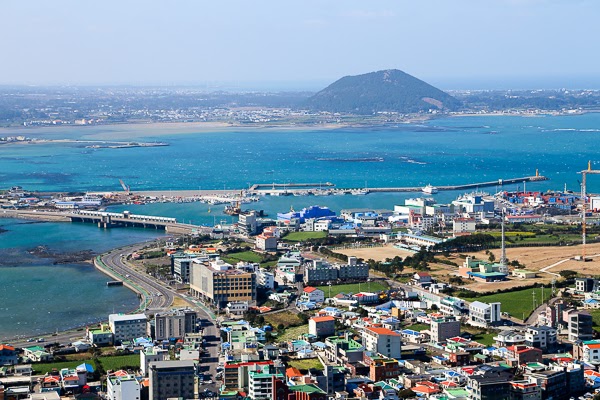 To understand the essential Jeju, one can start with the ubiquitous sight of the island’s 360 volcanic cones, shaped like mini Mount Fujis and known as oreum in the local dialect. These are parasitic cones of Hallasan, the central volcano with a number of satellite cones designated together by UNESCO as a World Heritage Site and selected — allegedly by organized armies of Korean voters — as one of the New 7 Wonders of Nature. 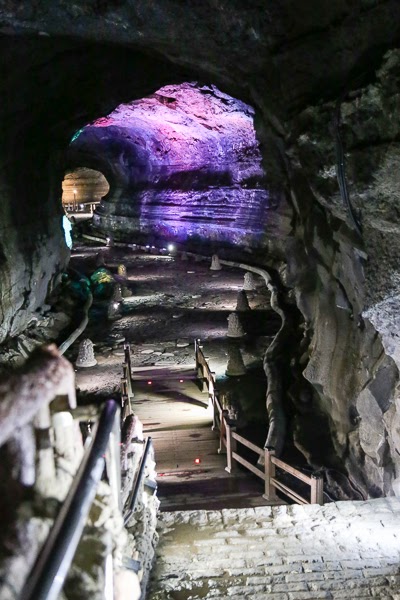 Leaving the snow-covered summit of Hallasan (this was February) for a future visit, we started our day with a quick breakfast of conveniene store gimbap before driving straight towards the other two UNESCO-protected areas on the island, starting with Manjanggul cave, one of the world’s finest lava tubes and among the rare few accessible to the general public. 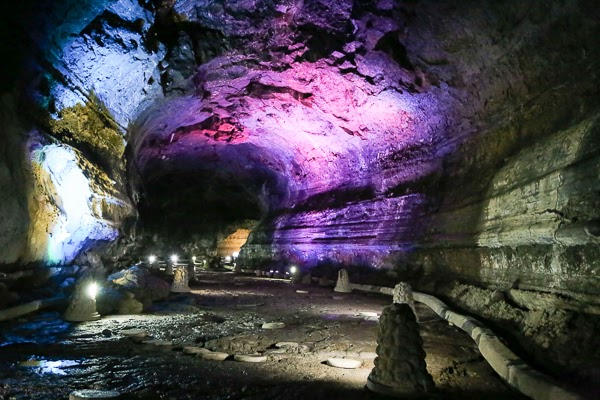 A 7.4 km tunnel carved through solid rock by molten lava flowing towards the coast, Manjanggul features a well-maintained walkway showcasing the lava tube’s volcanic stalactites, lava rafts and surprisingly airy ceilings soaring up to 30m high. The accessible section measures barely 1 km, a tiny fraction of the 20 plus semi-connected lava tubes branching from the same satellite cone on the eastern slope of Hallasan. 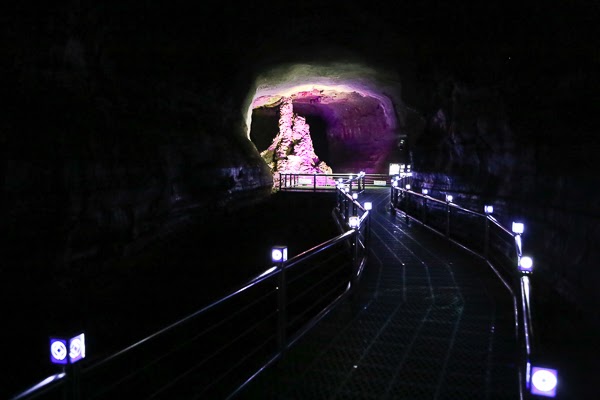 Towards the end of the tunnel was an enormous queuing space designed for holding hundreds of international tourists normally flooding Manjanggul’s most famous spectacle. On this day it was eeriely empty, platoons of tour buses thwarted by Jeju’s cancellation of visa-free entry for Chinese visitors due to COVID-19. 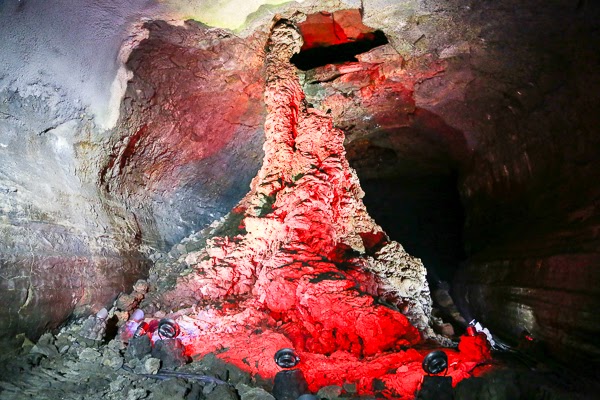 The world’s largest lava column — 7.6m of illuminated glory — stood in solitude for our unobstructed selfies, though we would have preferred to visit in a less somber circumstance. With frequent photo stops it took us 60 minutes to reach the lava column followed by another 20 minutes of backtracking to the entrance. It was nearly noontime when we hopped back into our car, another 30 minute drive away from our selected lunch spot. 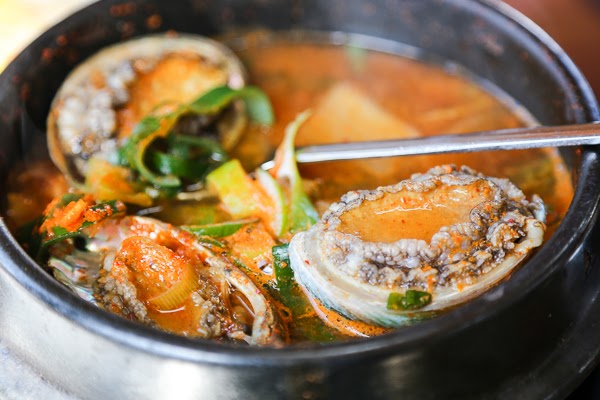 Arguably Jeju’s most representative cuisine is the harvest of the haenyeo, the island’s dying tradition of female freedivers risking their lives on the seabed for the freshest abalones and conches. Here at Seongsan’s Jinmi Sikdang (see map) three sizeable abalones were swimming inside a piping hot ttukbaegi alongside blue crabs and langoustines for just 15000 Won (CAD$17), surprisingly cheap for this lavish and perilously harvested local ingredient. 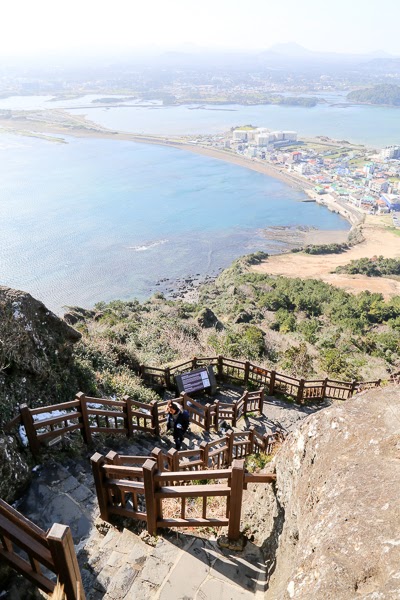 Part of my reason for choosing Jinmi Sikdang was its convenient location next to Seongsan Ilchulbong, another UNESCO-designated site and the definitive landmark of Jeju-do. Connected to the mainland by a narrow sandspit, the distinctively steep hill of 180m is actually a tuff cone formed by a prehistoric eruption of an underwater volcano. 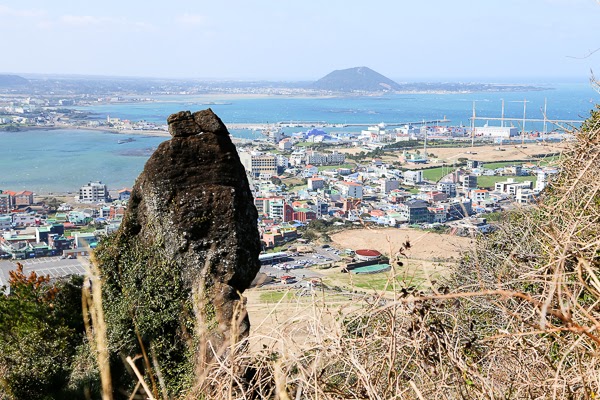 Situated at the easternmost point of Jeju, Ilchulbong — literally Sunrise Peak in Korean — opens before sunrise for avid hikers year-round, especially on new year’s day for revelers to make their wishes for an auspicious year. The sweeping panorama from the top encompasses everything from the snowy Hallasan to the nearby island of Udo to the neighbouring volcanic cone of Jimibong pictured. 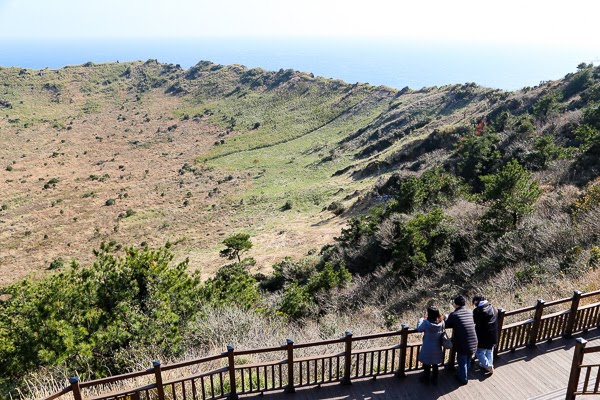 It takes no imagination to see why such a magnificent crater, 600m across and encircled by deadly drops into crashing waves below, played a major role in the folk religion of the nearby villages. To this date village elders still bow to the sacramental rock pillars on their climb to the peak. 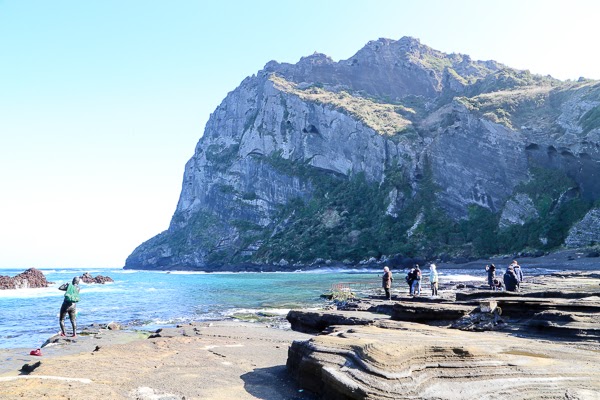 Hiking down to sea level one can appreciate the formiddable cliffs of the tuff cone, rising from the sea like gigantic ramparts and leading to the name of Seongsan, or Fortress Hill. This rocky shoreline is also the traditional hunting grounds of Seongsan village’s troupe of haenyeo, scheduled to return to shore twice a day with their catch to demonstrate their treacherous profession. 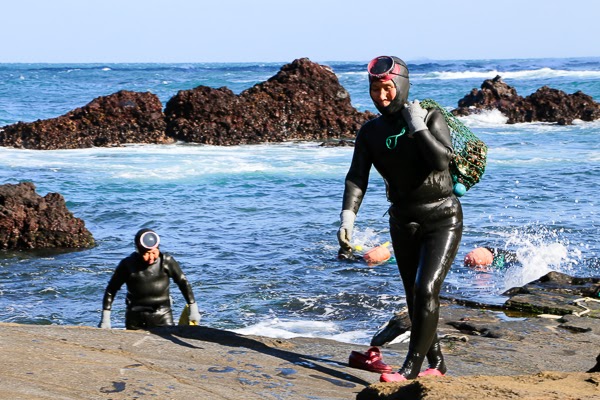 Mostly grandmothers in their 60s and 70s, these Sea Women are inheritors of a dying semi-matriarchal tradition in which the wives serve as main income earners via the profitable but dangerous art of shellfish harvest with no breathing apparatus. 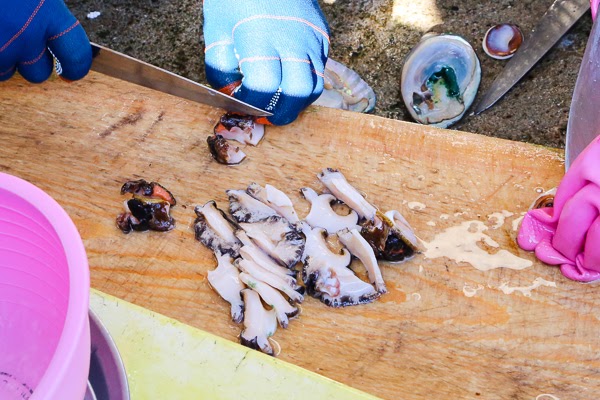 It was a fortuitous day. The sizeable abalones from the catch were sliced immediately, mixed in with fresh turban shells and sea cucumbers and served raw as hoe at their makeshift restaurant on the side, for 20000 Won (CAD$23) a plate for curious visitors. 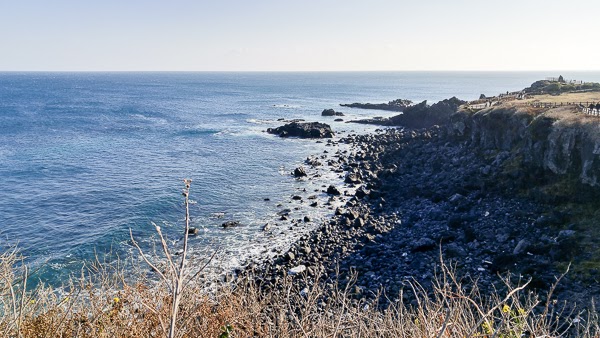 It was 16:00 when we left Ilchulbong and took the short drive to a famously picturesque coastline a few kilometres to the south known as Seopjikoji. Unlike many visitors we came neither for the blooming canola fields nor Ando Tadao’s avant-garde architecture at the Yumin museum, but its iconic vista of … 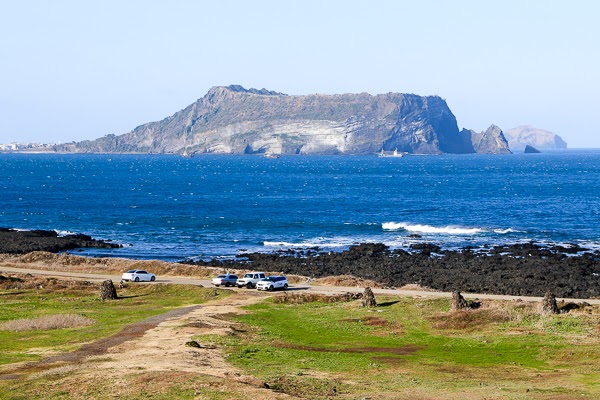 … Ilchulbong in its full glory! In fact Ando Tadao himself was so impressed that he incorporated this perspective as a shakkei, or borrowed-scenery, inside his vertical rock garden at the Yumin museum. The wind was ferocious here on Jeju-do’s exposed eastern coastline, but it was all worthwhile. 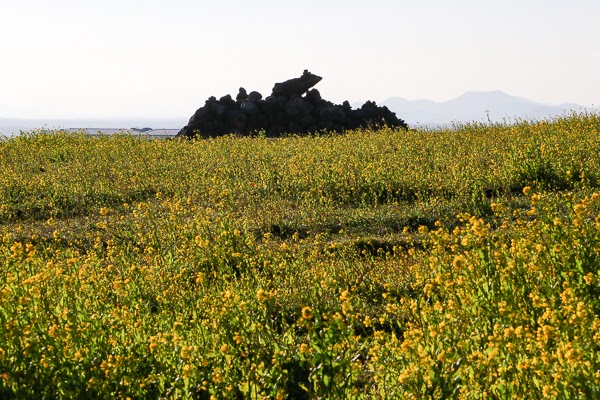 Whimsically-piled rocks across the canola field somehow reminded me of Jeju’s other famous contribution to Korean cuisine. Our choice of dinner was a tough decision between … 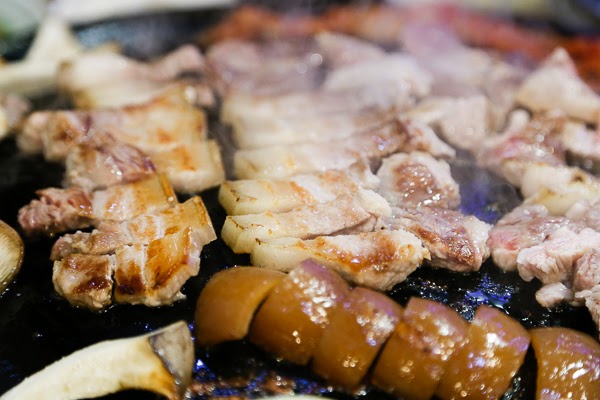 … Jeju-do’s indigenous black-haired pig, served as samgyeopsal in a traditional Korean barbecue at Tabbupyeong Sikdang, or … 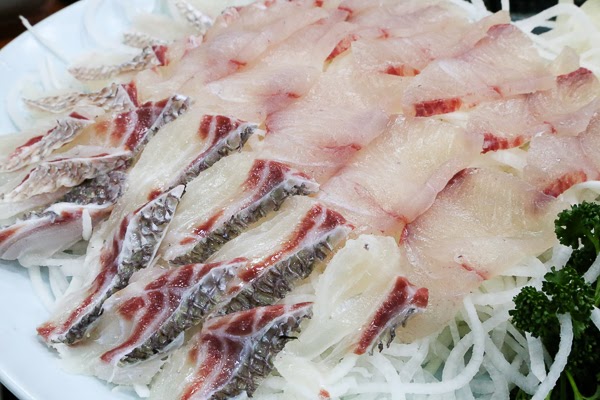 This is exactly why I won’t advocate spending just a couple days in Jeju, especially for curious foodies ready to sample its regional specialties considered among the best of Korean cuisine. Full restaurant reviews will come in the following posts.