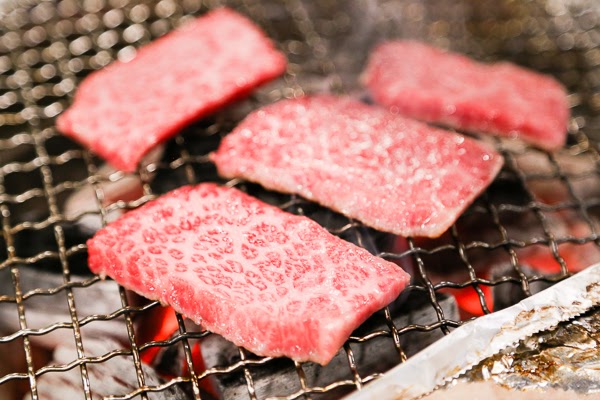 This post documents our pilgrimage to the capital of Hanwoo beef, a wholesale wet market hidden in a residential district of Seoul and responsible for feeding 10 million Seoulites’ insatiable consumption of everything from bulgogi to ujoktang.

If you’re looking for my conversion table of beef grading of Korean Hanwoo vs. Japanese Wagyu — e.g. 1++ vs. A5 — click here or scroll down towards the bottom. 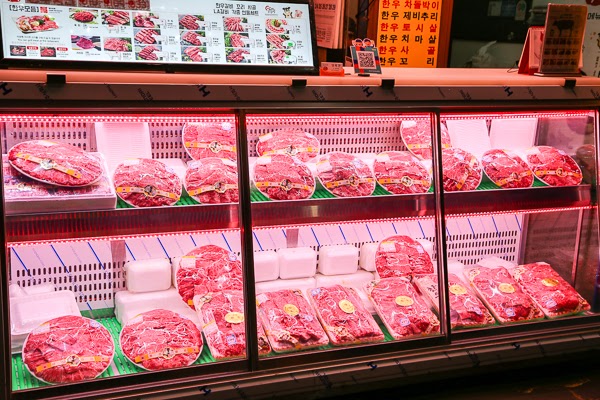 For those unfamiliar with Korean Hanwoo, you’ve probably heard of Japanese Wagyu and its melt-in-the-mouth texture derived from its well-marbled composition. Hanwoo — literally Korean Cattle — is the peninsula’s native breed that has become a cultural icon in this age of Hallyu and is starting to challenge Wagyu’s global dominance. The problem for foodies outside Korea is that genuine Hanwoo rarely gets exported due to voracious domestic demands, and when available often commands even higher prices than the exorbitant Japanese Wagyu.

Well, we’ve specifically traveled to Kobe for Kobe beef and Hida for Hida beef before. It’s about time we hit the largest meat market in Korea. 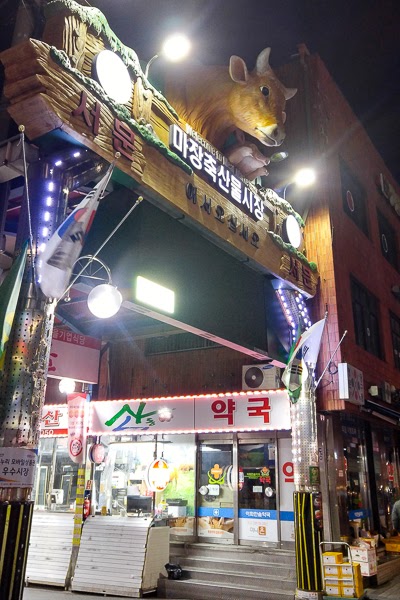 Majang Meat Market isn’t just for buyers and restauranteurs. For decades neighbourhood ajummas have come to pick up ingredients for their jeyuk bokkeum, and blue-collar workers have long enjoyed their afterwork socials at its hole-in-the-wall BBQ joints, grabbing discounted samgyeopsal from the meatshop and heading upstairs to the smokey diner for an evening of grilled meat and soju. Eventually tourists discovered its offering of 1++ grade Hanwoo beef at 30-40% off, though the discount is really much smaller after factoring in grille fees and lack of the usual freebies (doenjang jjigae!). More about that later. 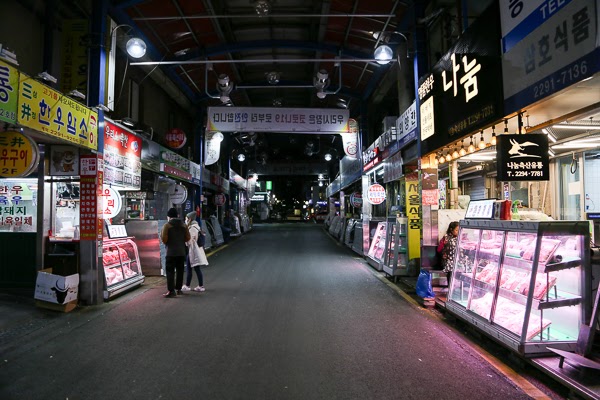 A 7 minute walk from Line 2’s Yongdu Station brought us to this ginormous arcaded maze, 16 football fields in size boasting 2500 stalls of unfiltered wet market gore. Fortunately the classic cow-heads-on-metal-hooks had mostly been stashed away by our arrival at 19:00, leaving a handful of shiny refrigerated display windows of premium cuts — wang-galbi ribs, tenderloins and neckchains — for the dinner patrons’ choosing. 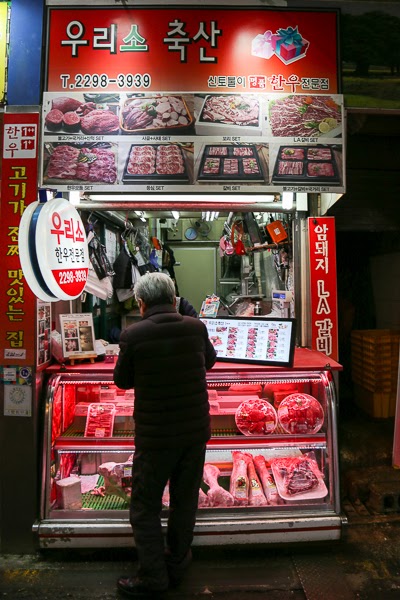 Before walking up to the counter it’s helpful to know the going prices for top, i.e. 1++ grade, Hanwoo. The following prices are what I’ve recently seen on restaurant menus in Seoul, at the time of writing (2020).

These common cuts are often available around 20000 Won/100g at mid-market restaurants elsewhere in Seoul:

The above are recent prices seen at mid-market eateries in Seoul. On upmarket restaurant menus I’ve seen Salchisal and Ansim priced at 39000 Won/100g. Ouch. 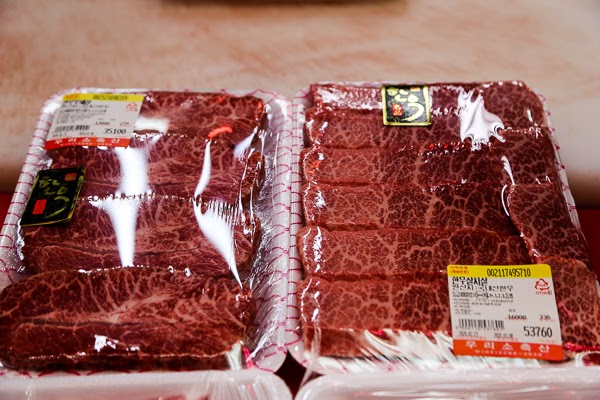 The friendly imonim at Wooriso Chuksan was trying to sell us her typical rib eyes and variety packs until we spotted these two staggeringly marbled cuts.

On the left was a Buchaesal or flat iron steak, allegedly Jamie Oliver’s favourite cut for its generous marbling and full flavours. This was surprisingly cheap at 13500 Won/100g x 270g = 35100 Won.

On the right was a Salchisal or chuck tail flap, the fattiest, highly marbled end of the rib eye muscle and one of the most expensive cuts at BBQ houses across Korea. Here it cost only 20% more per gram than the cheap Buchaesal, at 16000 Won/100g x 336g = 53760 Won.

After a slight discount our total came to 88000 Won (CAD$100) for a stomach bursting 600g of 1++ grade Hanwoo. This same meat would have cost about 150000 Won at a mid-range gogitjib elsewhere in Seoul, though we still needed to pay a little more here in grille fees. 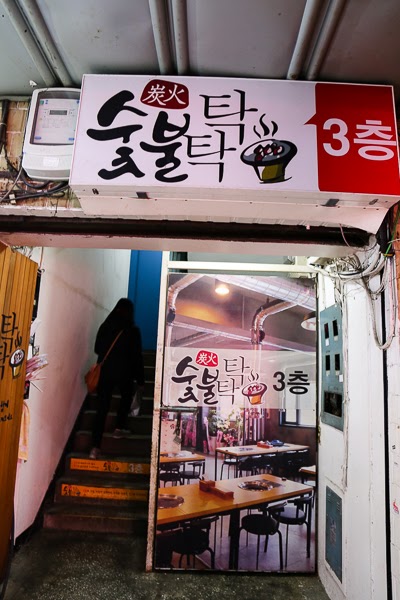 The next scene would be something out of a drug deal — with packs of meat instead of the briefcase — as customers were simply told to walk up a shadowy flight of stairs down the alley and find the 3rd floor. Nothing to worry: it’s actually an informal grille house known as Suchbultaktak. 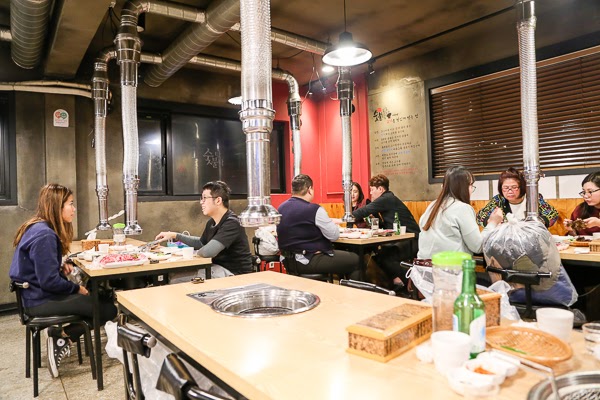 The mystery gogitjib was normal as normal could be: tables of ordinary-looking clientele huddled around grille tables with your typical foil ducts hanging down from the ceiling, complete with those oversized plastic bags for everyone’s jackets. As the name alluded, grilling involved real Suchbul or charcoal fire, which is always a good sign. 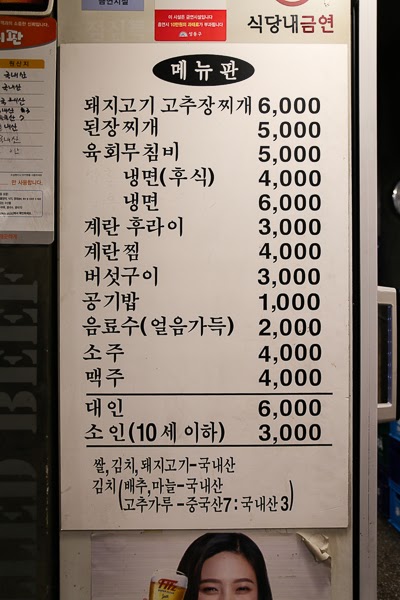 There’s no English menu, but the key takeaway is a grille fee of 6000 Won per head (half price for kids under 10), and of course no freebies such as doenjang jjigae (5000 Won) or gyeranjjim (4000 Won) which sometimes come free at higher end gogitjibs where you’ve already paid a premium for the meat. Rice cost 1000 Won as in most places, and soju and beer were all 4000 Won. 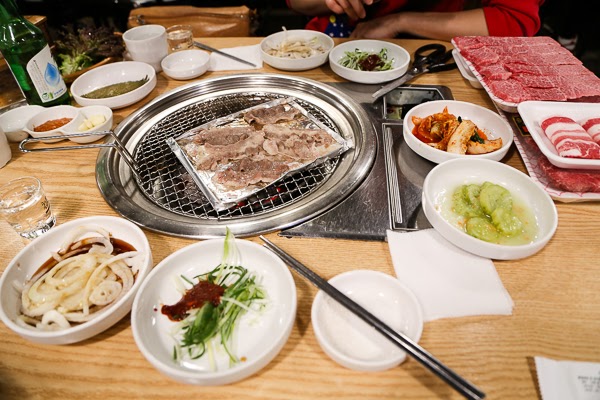 Thankfully the grille fee did include a few basic banchan, pajeori and other condiments, and some lettuce and perilla leaves for ssam wrapping. At 6000 Won you really can’t ask for much more. 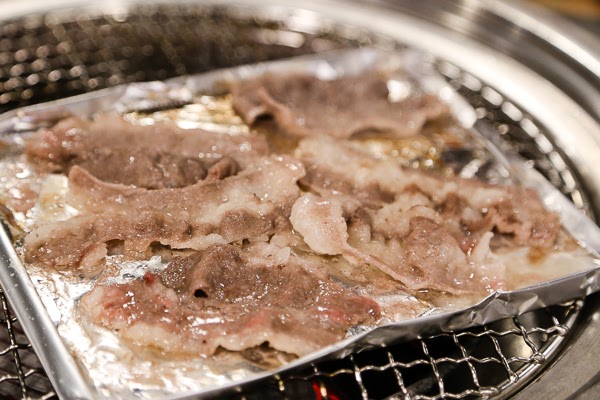 Did I mention that our imonim at the meatshop threw in two packs of thin-sliced chadolbegi beef for free? This was turning into an excessive gogi-gui dinner with about 350 grams (12 oz) of beef per person, reasonable perhaps in Texas but extravagant in Korea, considering most gogitjib places typically serve 150-200g per person for 1++ grade Hanwoo, just to keep prices somewhat affordable. 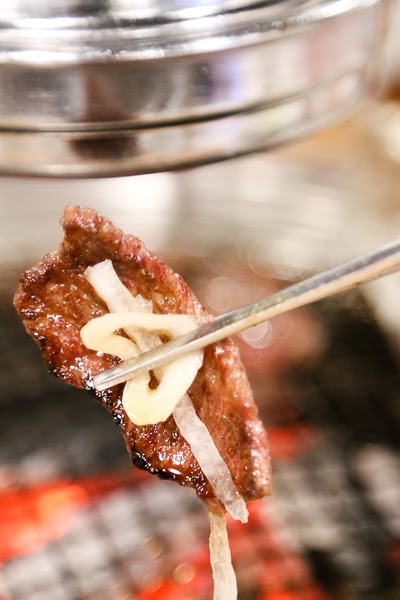 The moment of truth was coming up for our buchaesal or flat iron steak, made famous by celebrity chefs like Jamie Oliver and having even inspired a steakhouse of the same name in London that serves just this cut. But this here wasn’t a poor man’s tenderloin as the flat iron is often perceived; after all it’s 1++ grade Hanwoo at 13500 Won (CA$15) per 100g, a 30% discount perhaps but still not exactly cheap.

And it didn’t disappoint, turning out juicy and full of rich beefy flavours, tender enough yet still slightly chewy as most Korean patrons prefer. 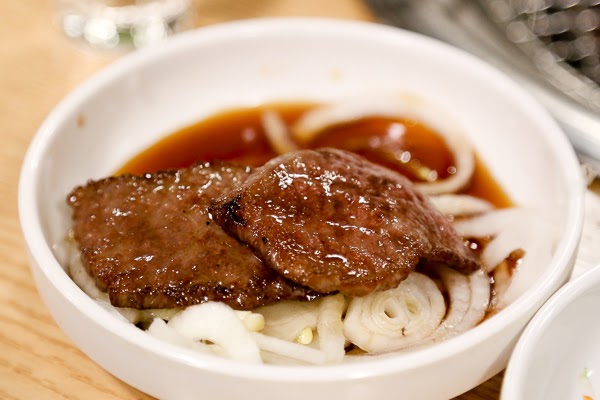 But the real test was the salchisal or chuck tail flap, arguably the most desired cut at any gogitjib in Korea with a stupendous level of marbling that should perfectly represent 1++ grade Hanwoo. Expectations were thus very high, my reference points being Matsuzaka or Kobe Beef in the A5 grade.

Now I hope this doesn’t sound too critical, but our 1++ grade Hanwoo wasn’t quite melt-in-your-mouth tender as what we had seen in top A5 grade Wagyu. My amateur palate would equate this mouthfeel to somewhere between a high A4 and a low A5 in the Japanese grading scale, insanely succulent and flavoursome while still requiring some marginal chewing. That said, the beefy flavour seemed more intense than Japanese Wagyu of similar rank. 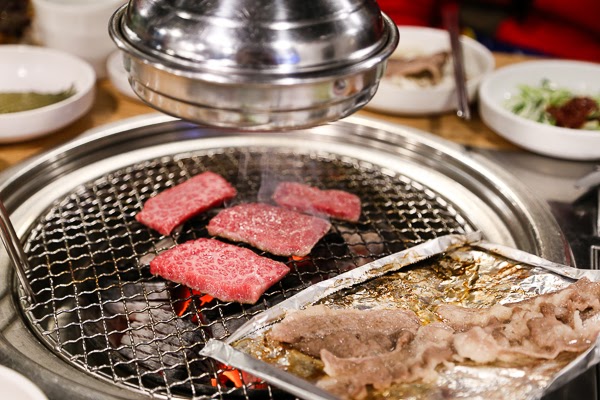 As a foodie I was quite perplexed by the difference in grading scales between two of the world’s most expensive beef products. Against inevitable backlash I’ve decided to take on the extremely controversial topic of creating a conversion table for Quality Grades (QG) for Korean Hanwoo vs. Japanese Wagyu.

Conversion between BMS — for which Korea and Japan each has its own version — and the consumer-facing Wagyu grades of A1 to A5 is well-established. Comparison with Hanwoo’s quality scales of 3 to 1++ is much more difficult as J-BMS and K-BMS are measured at different rib positions. So the above table is only an approximation, though it happens to explain our perception as consumers where 1++ Hanwoo provided a similar mouthfeel as the start of A5 rank in Wagyu terms.

One thing is certain: Hanwoo generally don’t reach the same fat content as Wagyu at its fattiest extreme — nor is it optimized that way as Korean consumers are known to prefer a slightly chewier mouthfeel and beefier flavours. 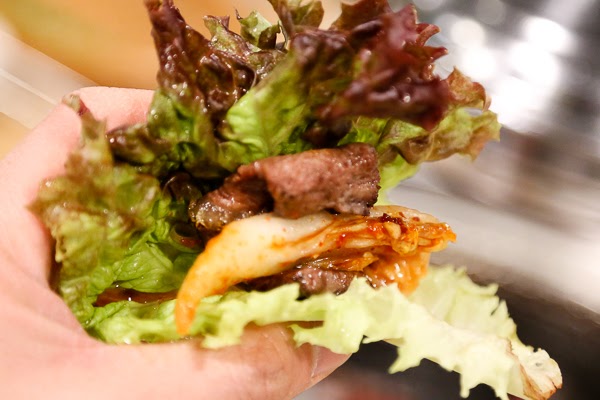 In retrospect I’d be content with the second highest grade of Hanwoo at 1+, my preferred 3-way optimization between soft textures, intense flavours and a slightly cheaper price. This would be confirmed several days later when we visited a specialty gogitjib in Suncheon focusing on locally-farmed 1+ grade Hanwoo. 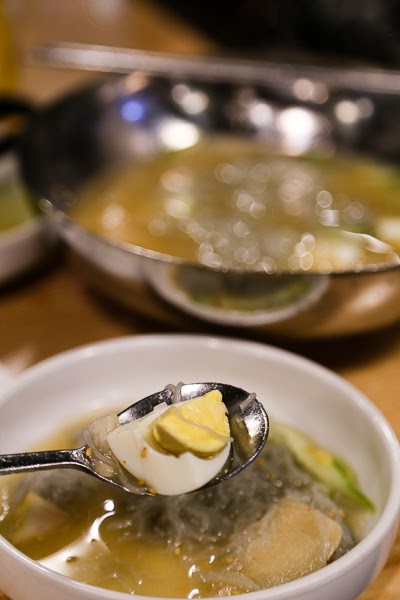 Towards the end I did order an extra naengmyeon to aid digestion with its acidity (conventional but counter-intuitive, I know). With a bottle of soju this brought our restaurant bill to 20000 Won, and our overall cost to 54000 Won (CAD$62) per person for our foodies’ pilgrimage.

Majang Meat Market is located 400m south of Yongdu Station on Metro Line 2. Take Exit 4 and walk south, crossing the Cheonggyecheon creek and passing the gas station. Look for the giant bull’s head above the alley’s entrance on the left side of the road.

One last word. Don’t be deceived by the common misconception that you’re getting your entire meal at a 30-40% discount — that’s true only if you’re bringing the raw meat back to your apartment. If you’re dining there and paying for the grille fee, think of it as a smaller discount plus the privilege to pick your favourite cut of certified genuine 1++ Hanwoo.