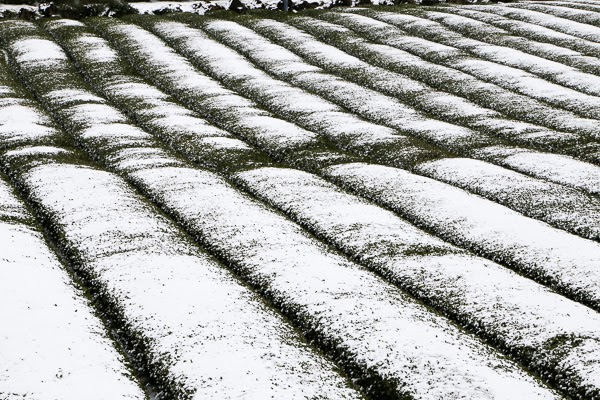 It would have been the classic winter scenery at Uji or Shizuoka, endless rows of immaculately manicured tea plants dusted in powdery white like icing sugar on a matcha pound cake. Ferocious snow storms thumped the floor-to-ceiling windows, catching even the local islanders off-guard, while we surveyed the plantation in the warmth of its 21st century tea house. 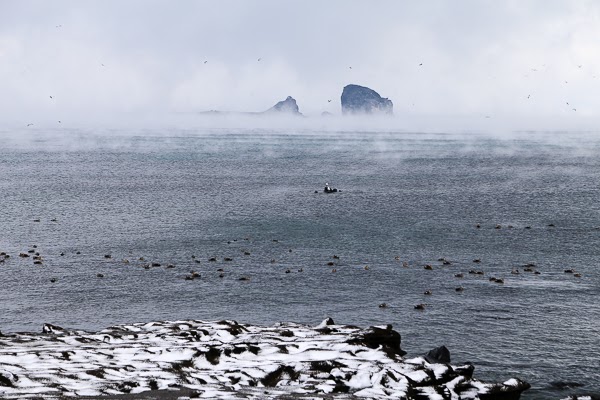 Nobody expected snow save for the most seasoned farmers here, nearly 1000 km southwest of Uji on a subtropical island known as the Hawaii of Korea. As South Korea’s “overseas” province situated 90 km south of the mainland, Jeju-do is more famous for its white sandy beaches and turquoise waters than for winter storm watching. 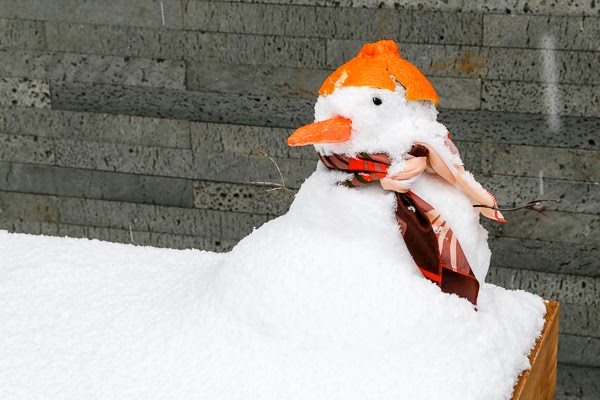 This was the wild start to our first full day in Korea, picking up our little Kia Ray, a boxy, fuel-efficient compact ideal for the small island of Jeju for the other 364 days of the year, without any snow tires. The rental office sternly advised against taking any inland road — especially anywhere near the Hallasan volcano — for fear of black ice. Black ice and Jeju-do just didn’t belong in the same sentence in my mind, until this day. 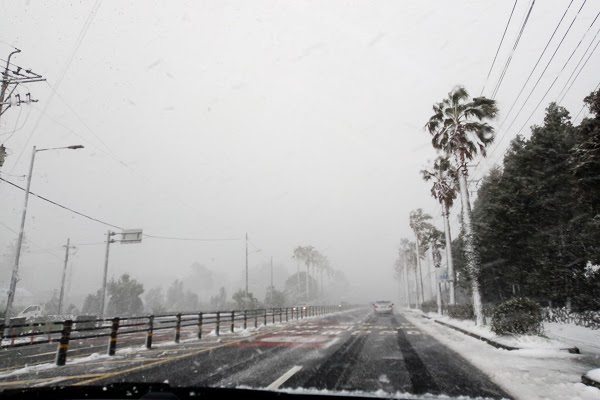 The view from my car’s windshield — tropical date palms plastered with sideways snow — was simply surreal even for a Canadian. While winter driving was nothing new to me, winter driving without winter tires always called for extra caution as we did take a number of inland roads as shortcuts. 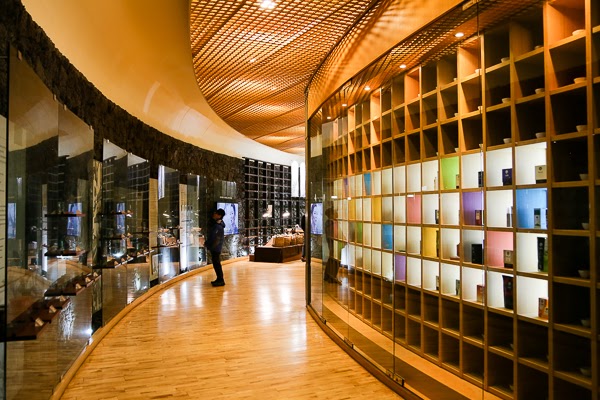 Snow storm or not, this is my number one recommended sight on the western side of Jeju-do.

Fans of Korean tea need no introduction to O’Sulloc, the nation’s premier producer featuring signature chic tea houses all over Seoul from Myeongdong to Gangnam. Here at their Seogwang Dawon on Jeju — the largest tea plantation in Korea, no less — stands their flagship showcase with an annual draw of 1.5 million tea enthusiasts. 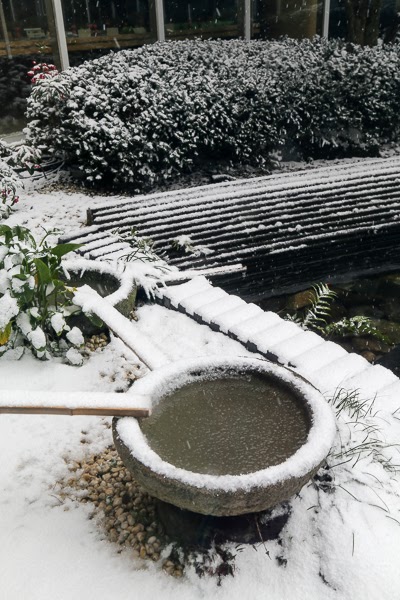 We thought O’Sulloc Tea Museum would be less popular on a snow day. It wasn’t.

In fact every like-minded visitor decided to taking refuge from the snow storm at this rambling complex of exhibition space, tea academy, flagship store, observatory platform, and of course its immensely popular cafe where finding a prime table next to the snow-covered courtyard required some luck. 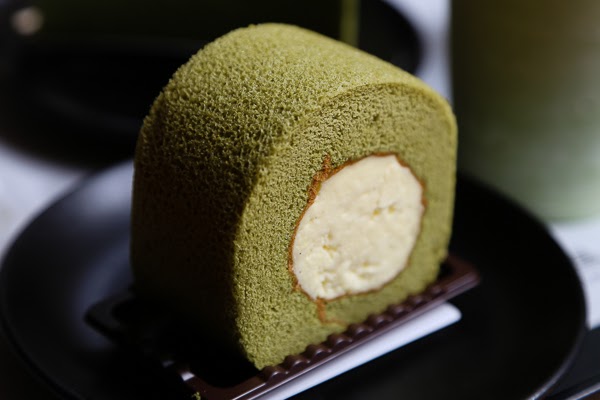 After all this was the grand daddy to Seoul’s plethora of O’Sulloc Tea Houses and one of Jeju-do’s top tourist attractions. Prices were no different from its Seoul outlets: 17300 Won (CAD$20) for a dessert set that included this nokcha roll cake, a small nokcha ice cream and a cup of nokcha fredo. Also on the menu are fancy tea cocktails as well as traditional premium loose leaf teas for the connoisseur. 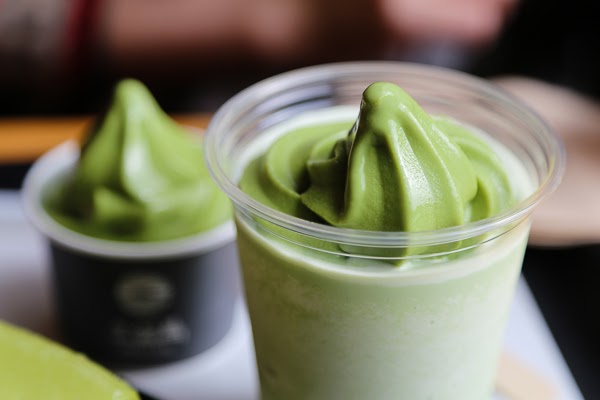 The top prize here, an unanimous decision between my wife and myself, went to a nokcha fredo that perfectly balanced the bitterness of the malcha with the sweet richness of heavy cream. To be brutally honest, the nokcha ice cream on the side was a disappointment with little chunks of undefrosted ice wrecking the otherwise smooth mouthfeel. 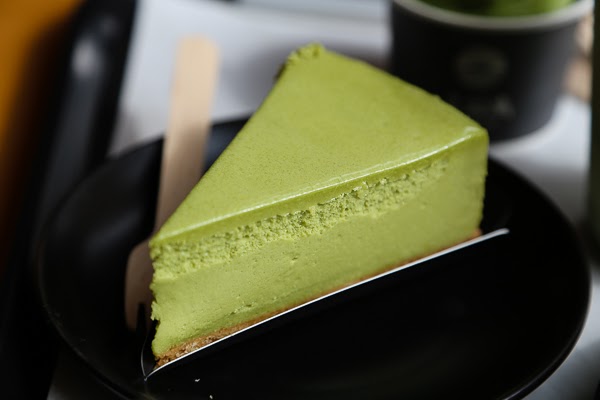 We added to our late breakfast a slice of nokcha cheesecake, sold separately for 6900 Won (CAD$7). While I did enjoy the infusion of nokcha into the velvety-smooth cream cheese, I found the excess sweetness of the cake crust to detract from the delicateness of the green tea and had to scoop away the bottom in order to fully appreciate the nokcha cream. But that’s just personal preference — Korean green tea desserts are typically designed for a sweeter tooth compared with their Japanese counterparts. 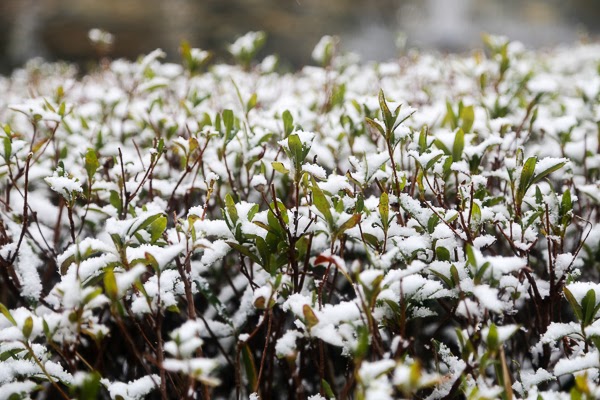 With the snow showing no sign of dying down, everyone was stuck doing more shopping at the tea shop as well as the plantation’s own Innisfree — a Korean cosmetic powerhouse owned by the same conglomerate as O’Sulloc — for its tea-extract-infused hydration serums, eye creams and the like. The Jeju limited edition hand creams, available here at a slight discount, were excellent and compact souvenirs. 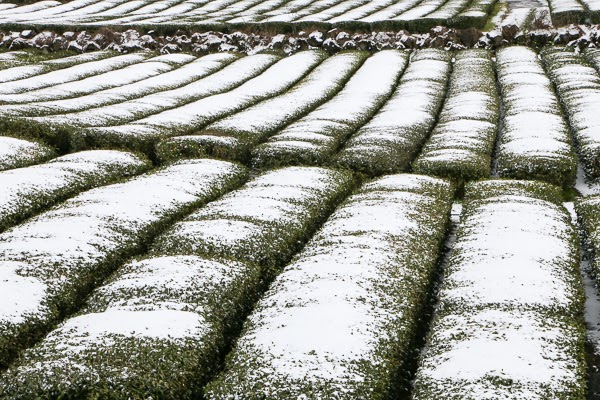 Beyond the complex was the start of O’Sulloc’s organic tea plantations — 130 acres here in Seogwang alone — selectively placed in a mineral-rich terroir of volcanic rocks and ashes and well-trained by Jeju-do’s famously strong winds. The strategy isn’t so different from growing winegrapes on Santorini, another volcanic island on the opposite side of the world, where quantity is sacrificed in favour of a premium product in a harsh environment. 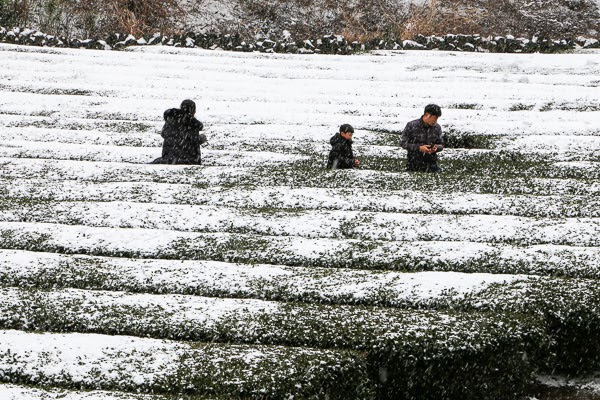 It was also a rare opportunity to walk amongst one of the world’s premier tea plantations. Unbeknownst to us at this time, we would end up at Korea’s other green tea capital of Boseong less than two weeks later, our plan of visiting Gyeongju thwarted by the start of COVID-19 outbreak in Gyeongsangbuk-do which diverted us towards the tea fields of Jeollanam-do. 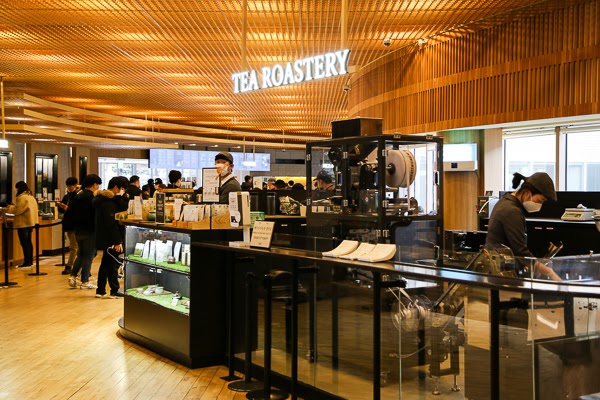 Prior to leaving we returned to the roastery and sampled a few premium teas recommended by the barista. We ended up with several packs of loose leaves: a smooth-tasting sejak green and an even better, semi-fermented volcanic tea derived from O’Sulloc’s own microbial fermentation paste. 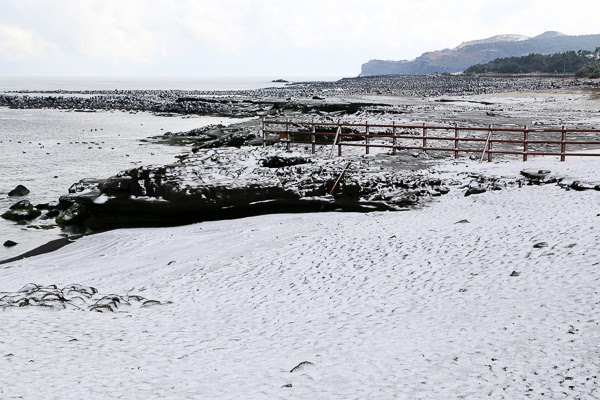 The snow grew even heavier as we drove towards Jeju-do’s southwestern coast for a taste of the province’s most famous dish of barbecued black pork at Keundonga, to be reviewed in a future post. A scenic drive along the rugged Hyeongje Coast with a misty view of its namesake brotherly isles offshore was just a bonus. 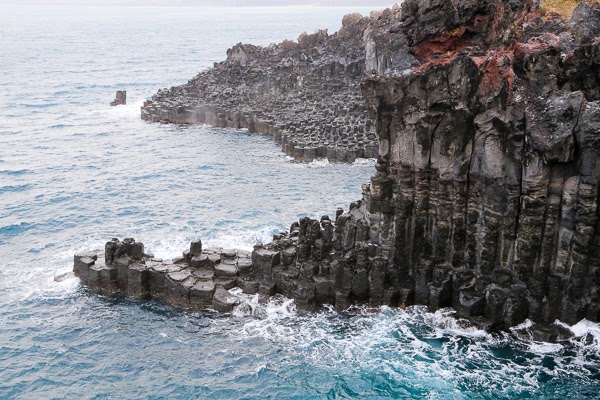 Further along the coast towards Seogwipo we dropped by Korea’s own Giant’s Causeway at Jusangjeolli, a picturesque cliff of wave-crashed basalt columns resulting from a massive eruption of Hallasan in Jeju’s prehistory. 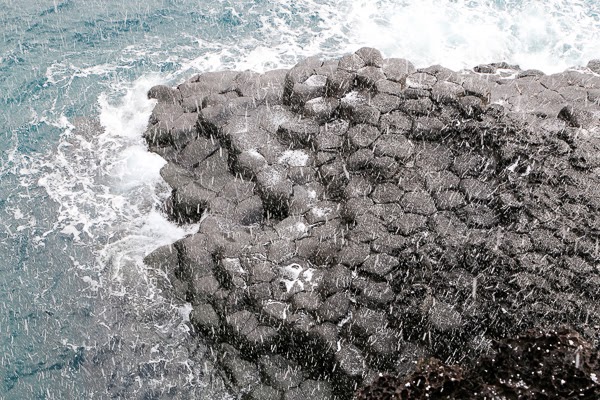 Only a handful of visitors shared this rare glimpse of a snowy Jusangjeolli with us, until the increasingly heavy storm chased us back to our car. We subsequently skipped our planned visit to the Jeongban waterfall and headed to the Oedolgae rock as our last stop on the south coast. 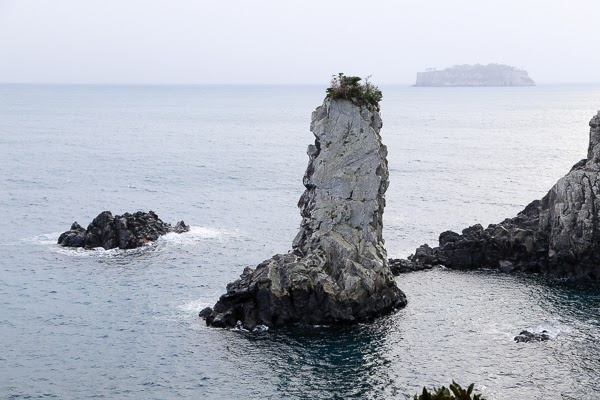 Legends tell of a 14th century battle in which the Koreans dressed up the rock pillar as a giant warrior in a psychological warfare against the last of the Mongolian invaders. By 16:45 we started our drive back to Jeju City in increasing darkness, the right decision in retrospect as the road back was all covered in snow. 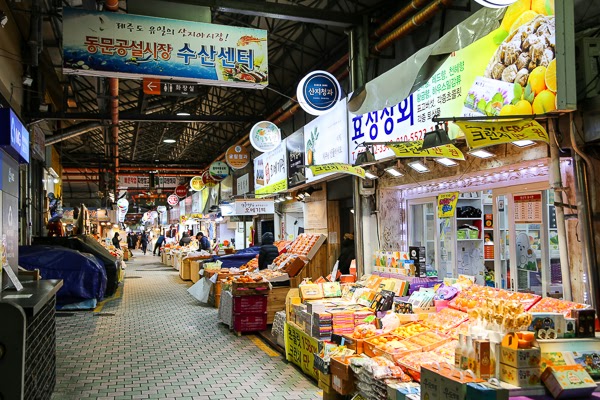 Back at Jeju City, Dongmun Market was uncharacteristically quiet without the usual swarms of Chinese tourists, leaving the gift boxes of Jeju oranges and red ginseng without buyers. This was just the beginning of the COVID-19 outbreak and the situation would deteriorate further within the next week, starting from Daegu as the epicentre. 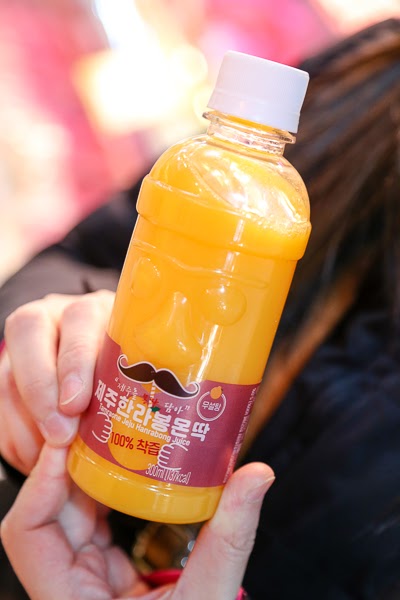 Dwindling tourists numbers did not translate into discounts for perishables like the everpresent bottles of fresh-squeezed Hallabong, an oversized mandarin orange long considered Jeju’s signature produce. With a little bump at the top shaped like the sacred volcano of Hallasan, this orange is popular enough to warrant its own specialty outlet at the Jeju Airport where Korean mainlanders would bring them back in caseloads. 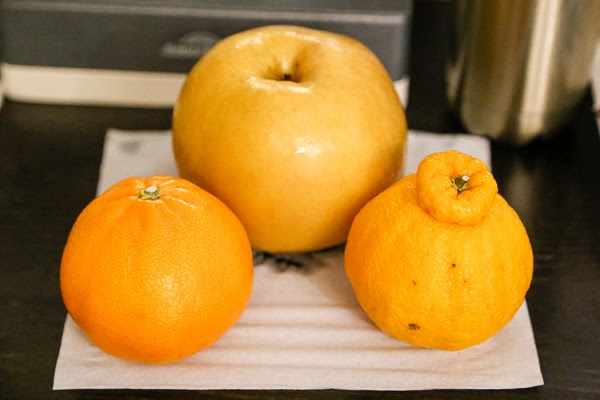 Wanting our Jeju produce at non-tourist prices, we bypassed Dongmun Market and drove to a local supermarket where we picked up the pictured Kamgyul (left) along with a Hallabong (right), shown here in their relative sizes compared to the gigantic Korean pear in the background. My wife preferred the conventional Kamgyul for its sweetness while I didn’t mind at all the distinct tartness of the Hallabong. 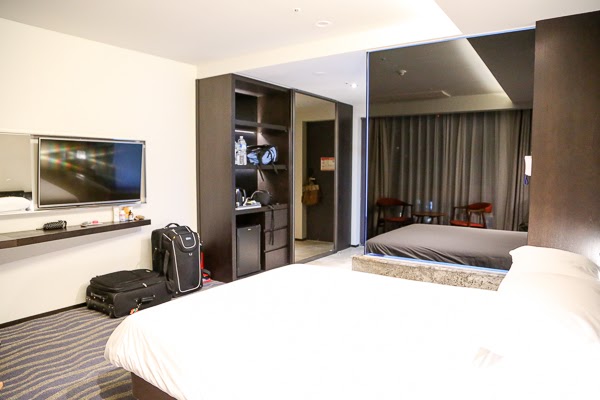 Our homebase for four nights was the Howard Johnson in New Jeju City which — for those with rental cars — was conveniently located within a short taxi ride (5000 Won) from either the airport or Lotte Rent-A-Car. Not sure if it was a COVID-19 special, but prices were very reasonable for a spacious room with a courteous and English-speaking front desk, plus plenty of shopping, restaurants and convenience stores within a 5 minute walk. One word of caution though: you do need decent parking skills for its Korean-sized underground parking spots.