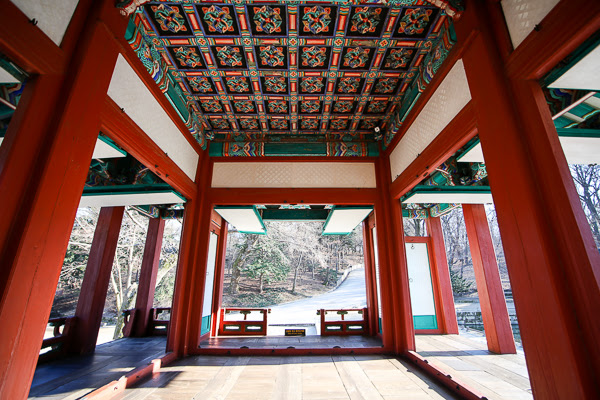 It was a dream come true for independent travelers, a divine afternoon spent lying flat on the centuries-old polished planks of the Joseon Dynasty royals’ favourite pavilion, and free to roam the normally-restricted acreages of the intimate Biwon, or Secret Garden, of the UNESCO-inscribed Changdeokgung Palace. 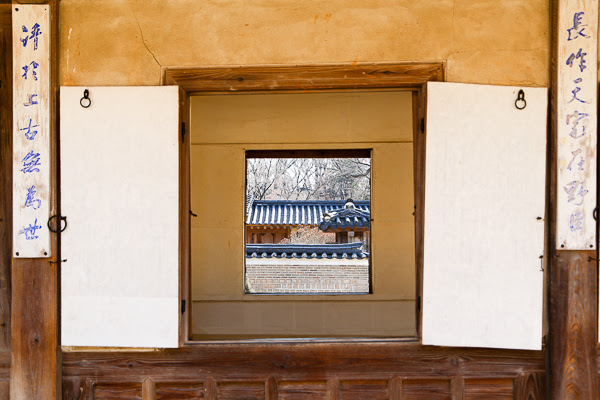 And no, we’re not diplomats or state guests — we just happened to arrive during the COVID-19 pandemic when Changdeokgung completely shut down its compulsory, 90-minute tour of the Secret Garden in which a designated guide would advance visitors along a circuit and escort them out at the end. Our jaws nearly dropped when we realized that we had an entire afternoon to freely roam the palace’s expansive grounds, taking off our shoes at the verandas and sitting back to enjoy its serenity — the way it was designed for its Joseon Dynasty masters. 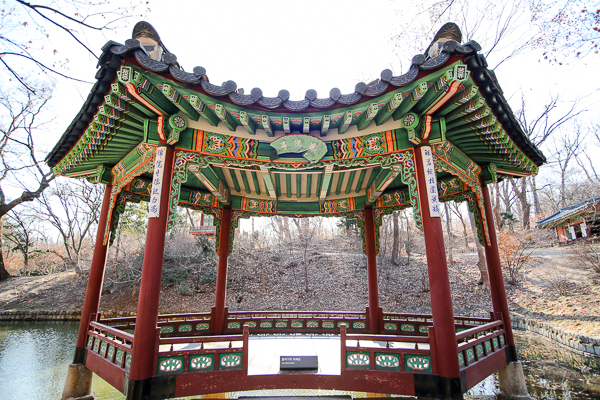 Best preserved of Seoul’s Five Grand Palaces and the only one elevated as a UNESCO World Heritage Site, Changdeokgung was the favoured residence for centuries of Joseon kings until the dynasty’s demise in 1910 at Japanese hands. The last king continued to live here under house arrest, and his youngest daughter — the last Korean princess — resided until her death in 1989. At one point it was among the world’s longest continuously-occupied royal residence at nearly 400 years, longer than Buckingham Palace or Palacio Real de Madrid. 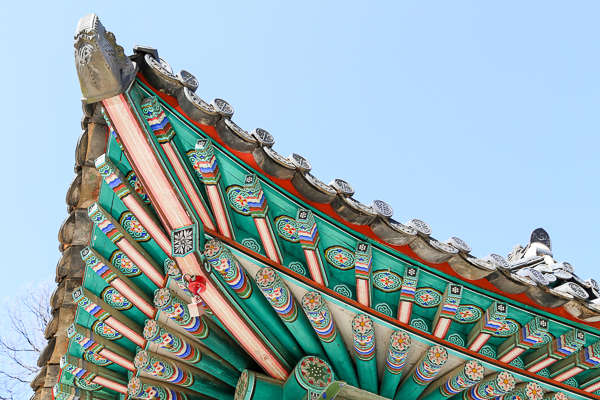 Compared with the famous and centrally located Gyeongbokgung — an ongoing modern reconstruction based upon a core of 19th century halls and offices — Changdeokgung sees just a small fraction of tourists despite its impeccable credentials. Forget the changing of the guards, costume experiences and other gimmicky shows: this is your authentic Korean palace for aficionados. 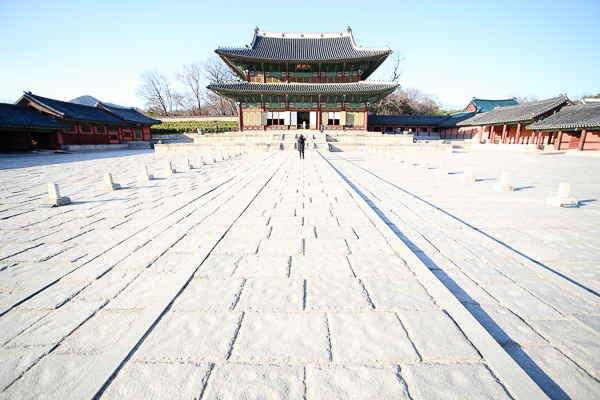 En route to the Secret Garden today’s visitors must pass by the monumental Injeongjeon, and fittingly so given the imposing hall’s original function as the dynasty’s official reception for foreign dignitaries and its legions of Yangban officials alike. 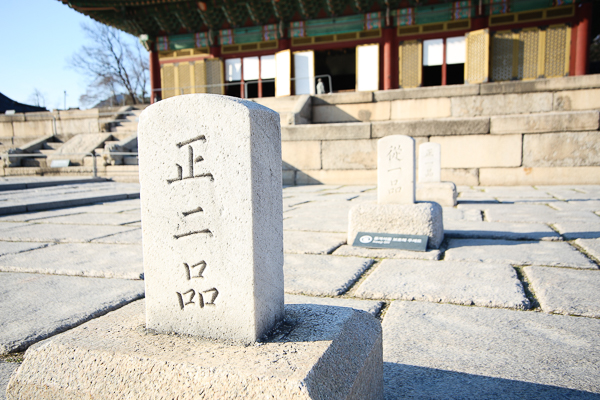 A Rank Stone marks the old assembly spot for Jeong 2-pum, or Senior Second Rank, of the king’s scholarly aristocrats at formal ceremonies such as proclamation of the Crown Prince. If you happened to be Junior Ninth Rank, you probably have no chance beholding the embroidered dragon on the king’s authoritative red robe. 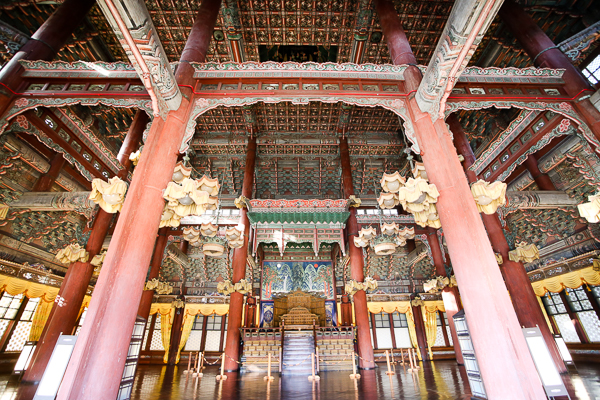 Advisors senior enough for king’s personal audience would enter Injeongjeon’s opulent interior, focalized upon the Phoenix Throne and ornamented with a magnificent formation of ceiling panels featuring the ihwamun, the stylized pear blossom considered the emblem of Joseon’s royal family. 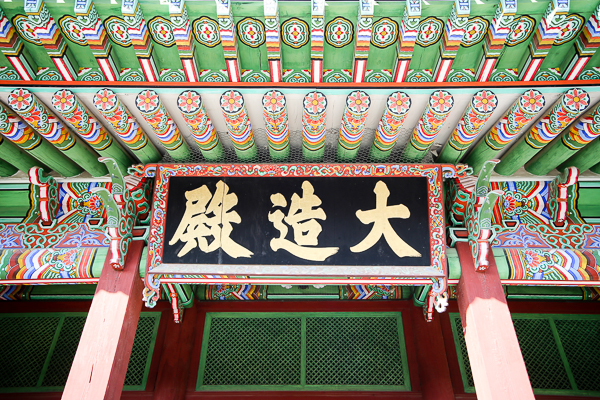 While Injeongjeon was at least accessible to civil servants, the neighbouring Daejojeon, literally Hall of Great Creation, had always been highly restrictive. For centuries the bedchambers of the Korean queen — and of the last Korean king upon Japanese occupation — this was symbolic enough that the Japanese colonial government had to strip down Gyeongbokgung for material to rebuild this royal residence after a 1917 fire.

Impressive enough, and that’s just the outer 40% of Changdeokgung. 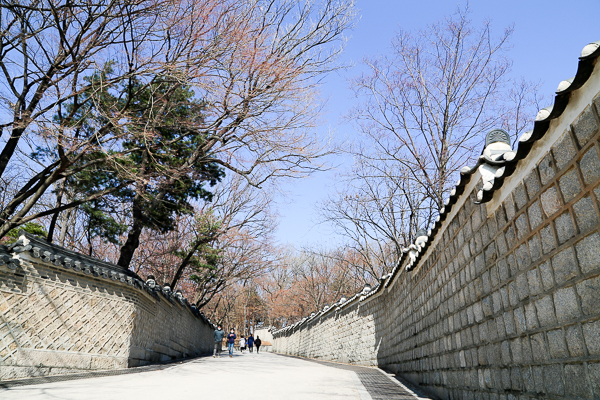 Going deeper requires a separate ticket, highly sought-after especially in peak seasons of cherry blossom and autumn foliage, available for online reservation only up to 6 days in advance. We did our due diligence in booking our spot for a chilly February afternoon only to join a handful of fellow participants amid the height of South Korea’s COVID-19 outbreak. And when our restrictive 90-minute circuit was unleashed into an entire afternoon of unobstructed stroll at our own pace, for the first time we didn’t mind the constant hand-washing and mask-wearing so much. 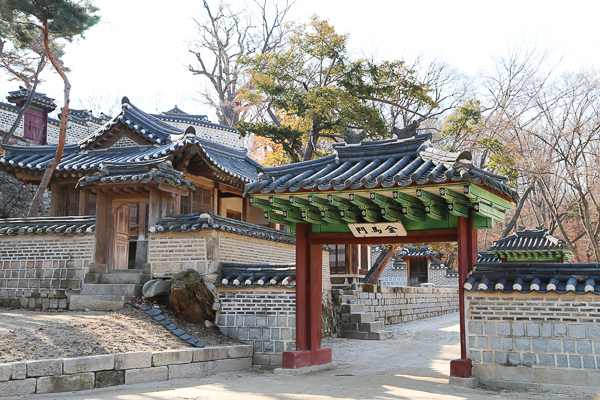 A long corridor of stone ramparts led to the complex of Buyongjeong, a pavilion built in the shape of a lotus flower in full bloom and overlooking a square pond centered upon a round, pine-clad island, a timeless illustration of the ancient East Asian cosmology of cheonwonjibang, or round sky and square earth. 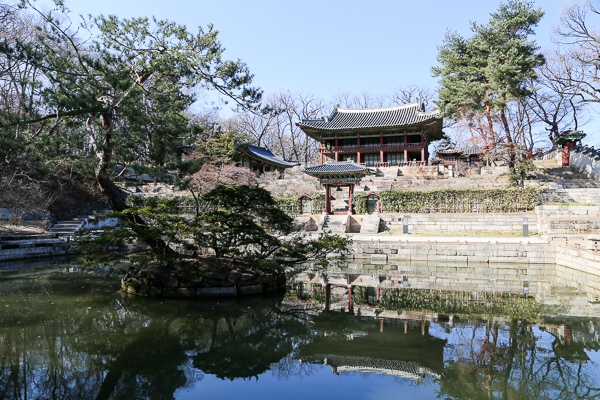 As tranquil as the small island may seem today, this was the centre of boisterous poolside parties in which King Jeongjo would jokingly banish any luckless aristocrat for the crime of failing to compose a poem within the allowed time. Hosting fishing invitations and moonlight boating parties here at the Buyongji pond, Jeongjo was evidently a wise king who understood the value of team building sessions with his closest advisors. 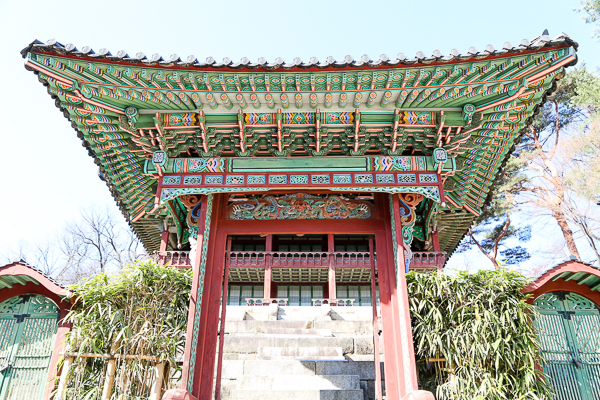 King Jeongjo also had a contemplative, academic side illustrated by his establishment of the the royal library above his favourite pool, entered through a gate consciously named Eosumon — literally Fish-Water Gate — as a self-reminder of the intimate working relationship between the king and his subjects in achieving harmonious rule. 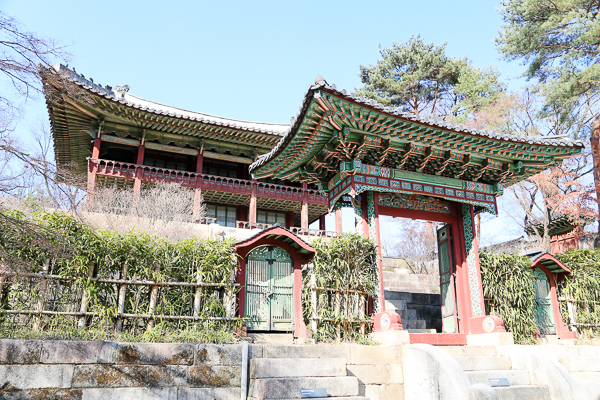 Constructed in the same year (1776) as American independence in the Western world, Juhamnu pavilion housed Korea’s royal library until its priceless volumes were relocated in the 1920s to what would become the Seoul National University. Today its second floor — the king’s strategy room — continues to overlook the neighbouring square pond and the Yeonghwadang Hall below. 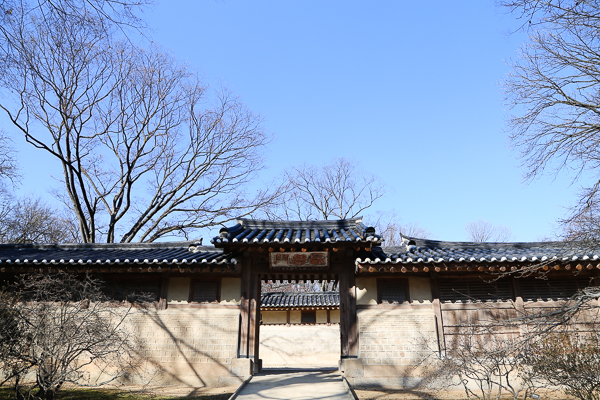 Further towards the Secret Garden’s rear we reached an intimate group of complexes modelled after civilian houses, intended as informal meeting spaces and living quarters complete with farm plots for the king to appreciate his subjects’ sweaty labour in the field, plus a silkworm hatchery for the queen’s embroidery work. 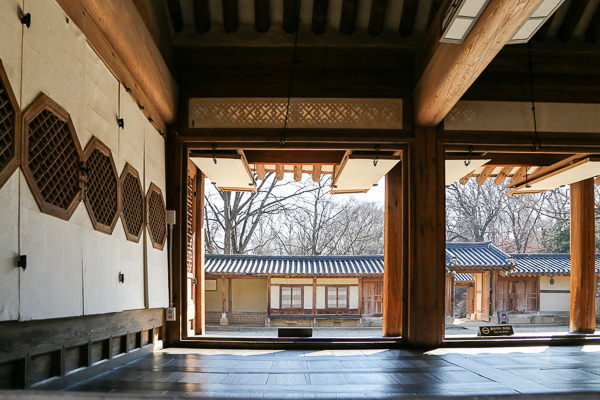 Hailing from the early 1800s, the king’s private study featured traditional ondol heated flooring for wintry days as well as detacheable window panels that could be lifted for ventilation during Seoul’s humid summers. With the best in material comfort and the most qualified faculty on hand, there was certainly no excuse for the Crown Prince to skip school. 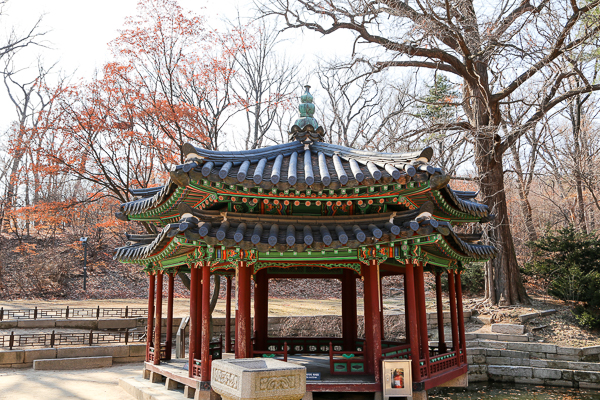 The absence of other tourists in our pictures wasn’t just due to camera angles — we saw less than 20 visitors over the entire afternoon in the Secret Garden. The charming hexagonal pavilion of Jondeokjeong, one of Changdeokgung’s oldest and most famous with its engraved poem by King Jeongjo, was completely ours to explore. 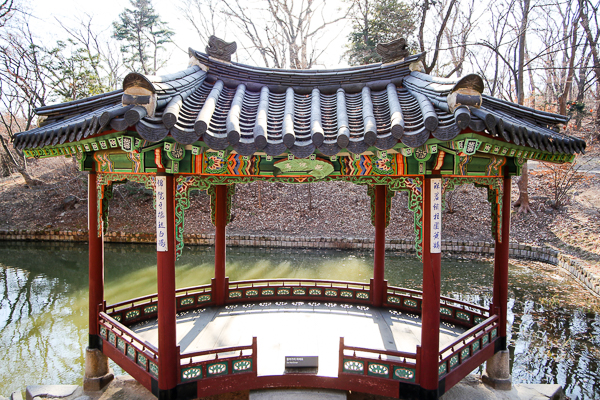 Perhaps the most extraordinary pavilion in the Five Grand Palaces, one-of-a-kind Gwallamjeong is a late Joseon Era design with a floor plan in the contour of an open fan and featuring a whimsical, plantain leaf-shaped name plaque. Setting foot inside the historic structure was strictly prohibited, barefeet or not, apparently unless you’re filming a period K-drama like Kingdom. 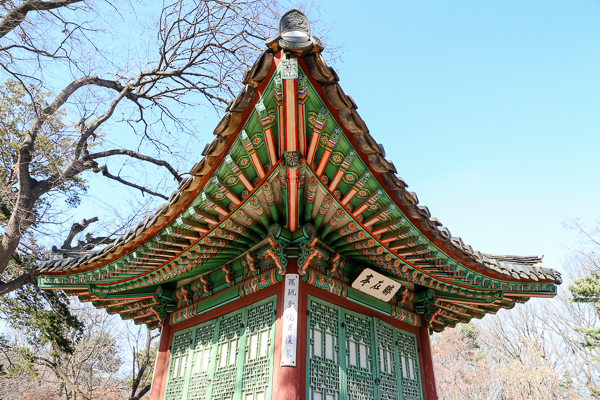 One of the best viewing angles to appreciate the uniqueness of Gwallamjeong was from the uphill pavilion of Seungjaejeong. From here Gwallamjeong’s deck could been seen overhanging an unorthodox pond in the shape of the Korean Peninsula, alleged by some to have been ordered by the colonial government to re-educate the Korean royalty that their cultural influence should not extend to Southern Manchuria where the Imperial Japanese Army would soon invade. 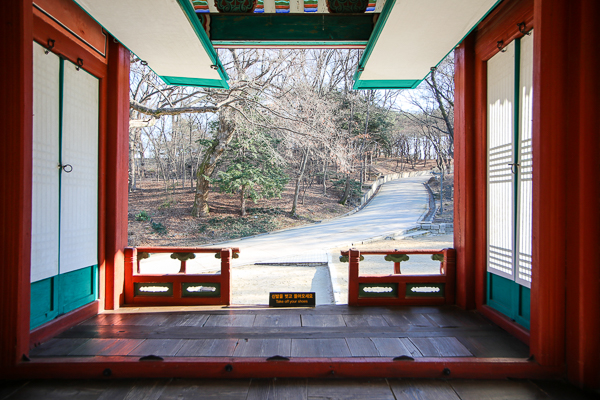 After a long scenic route back to King Jeongjo’s square pond, I took off my shoes and laid down with eyes closed inside Yeonghwadang, ironically famous for the Joseon dynasty’s most nerve-racking exam in which the year’s top scholars would compose their final paper in the watchful presence of the king, all competing for the prestigious title of Jangwon and a guaranteed post in the imperial court. 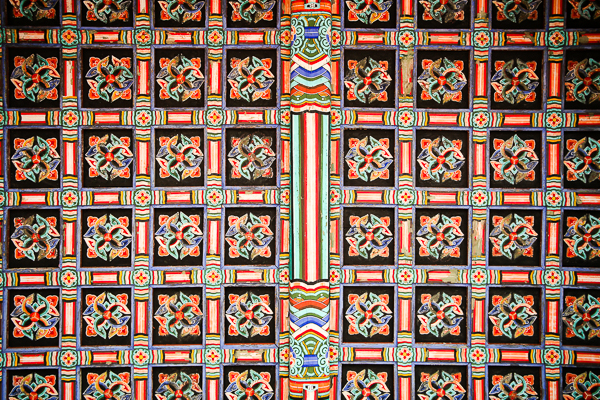 It was almost sinful to be lying flat admiring the intricacies of Yeonghwadang’s ceiling. In the old days only the king and his closest confidants had such privilege, smelling the early arrival of springtime and composing poetry in classical sijo. And we were all alone in the late afternoon without any other visitor, the only person in sight being a palace security guard in the distance. 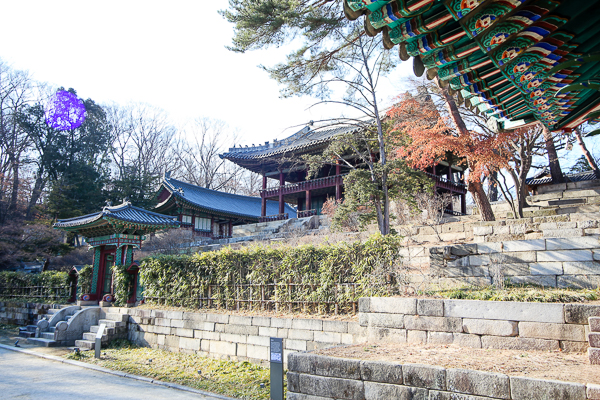 Prior to leaving I sat up and admired the exquisite Juhamnu and Eosumun from our pavilion’s veranda, partaking in the harmonious fusion between Korean palace architecture and the natural landscape. Five nights in Seoul and Incheon, and this was our favourite hour. 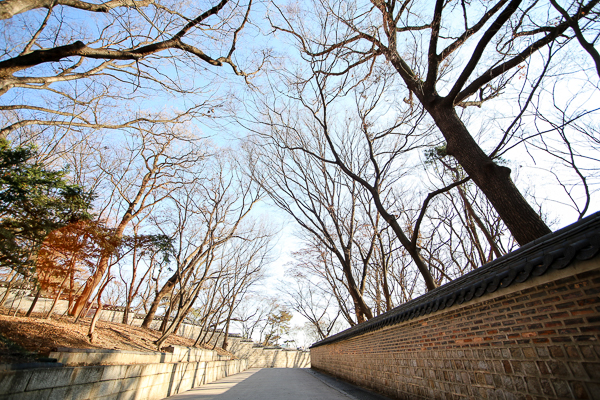 As walked back in the setting sun, it dawned on us that this was a once-in-a-lifetime experience that we likely won’t come across again. Surely we wouldn’t mind revisiting in the season of blazing autumn foliage, though that would surely be in a jam-packed guided tour rather than a free and spontaneous stroll during COVID.