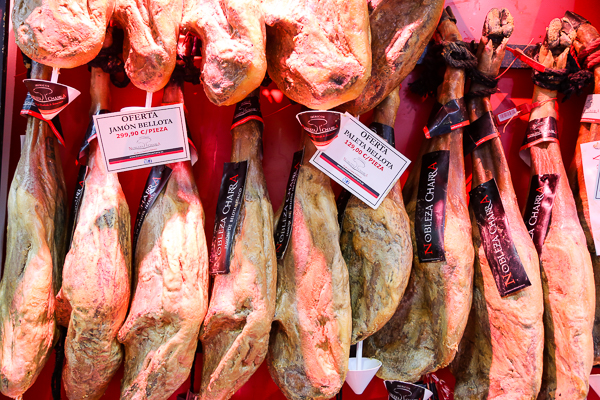 Our tastebuds had been waiting for Salamanca this whole trip.

Two nights spent in a city synonymous with cured ham, in a country known for the world’s best cured ham. Guess what our focus was for breakfast, lunch and dinner? 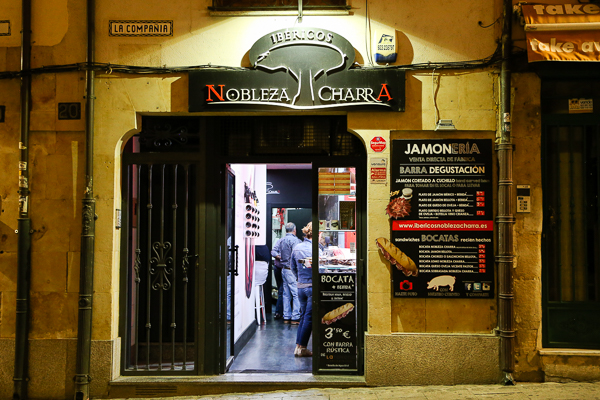 Upon arrival we started with a local farm-to-table jamoneria right across from the twin Baroque towers of Clerecia (absolutely recommended for night panorama) in the historic quarters, selling certified Jamon Ibericos from its own producers at discount prices. Prices started from a dirt cheap 3.9 euros for beer and a plate of regular Jamon Iberico, or 6.9 euros for Jamon Iberico de Bellota, the first-rate, acorn-fed variety typically served for about 12 euros in Madrid. 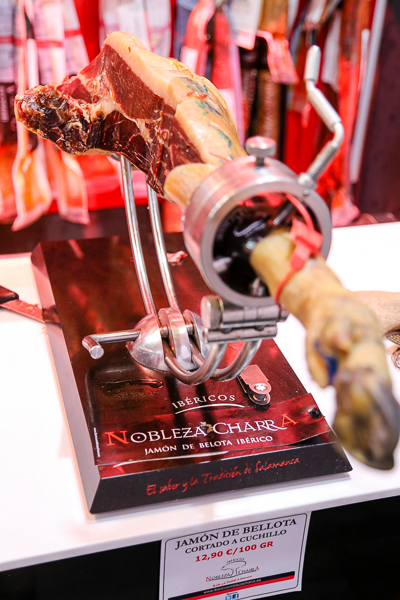 We had our eyes on the 6.9 euros Jamon Iberico de Bellota until we noticed this piece of premium ham on the carving stand, at 12.9 euros for 100g. As our server explained their regular Jamon de Bellota contained only 25% Iberico bloodline, whereas the premium version was derived from 50% Iberico breed. 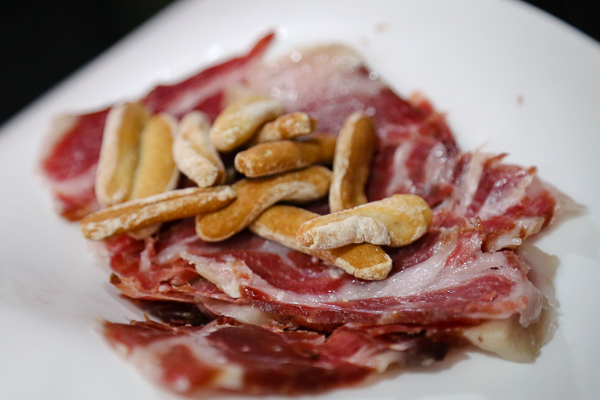 We ordered both for the sake of comparison, and the difference was subtle but noticeable. While the pieces could have been sliced thinner by our inexperienced carver, the acorn flavor of the 50% Iberico was definitely more prominent compared with the 25% variety.

That said, I would rank the quality of Nobleza Chara’s 50% Iberico de Bellota at the same level as your typical Museo de Jamon in Madrid: decent quality at reasonable prices. But this is Salamanca and I expected better, which led us to the city’s premier jam shop. 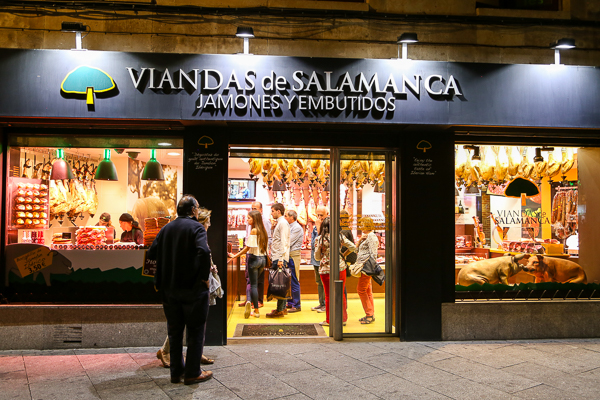 Thankfully we could always default to Viandas de Salamanca, the city’s pride and an internationally famous charcuterie chain with branches as far as London and Paris. Between its dozen or so branches across Europe, this one outside Salamanca’s Plaza Mayor serves as the flagship store at its hometown. 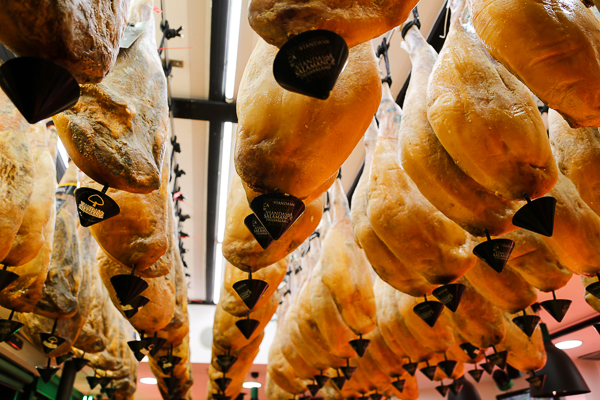 This was a carnivore’s dream, a modern cave with pillars of suspended hams instead of stalactites, emanating the masculine perfume of cured meat and fat. While we could have picked up a variety of Salchichons and Paletas, we were primarily interested in an apples-to-apples comparison against the premium Jamon de Bellota sampled earlier at Nobleza Charra. We would order Viandas de Salamanca’s own version of Jamon de Bellota 50% Iberico. 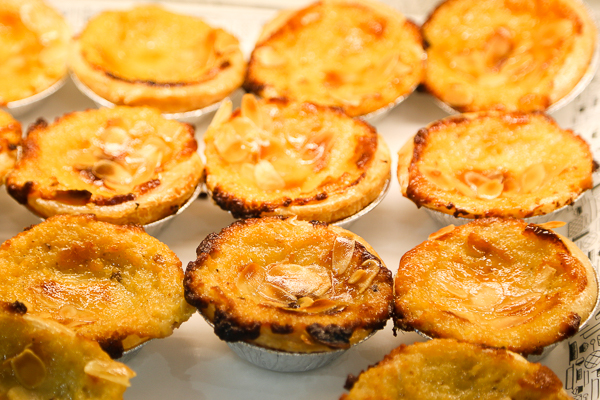 On the way to our hotel we dropped by Confiteria Santa Lucia on Plaza Mayor for some almond tartlets and pasteis de nata, which would complete our next morning’s breakfast along with some luscious Yemas de Santa Teresa that we picked up earlier in Avila. 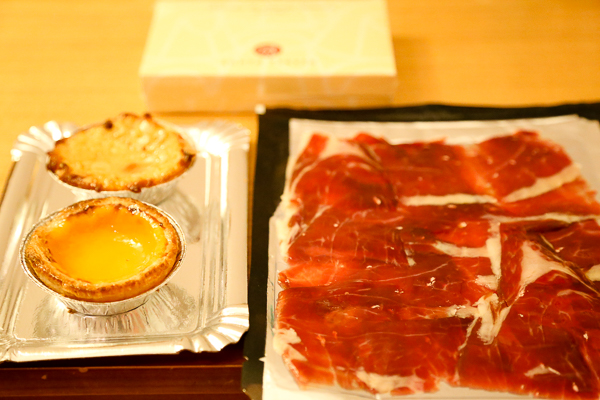 This was the showdown on our tastebuds: Nobleza Charra’s Jamon de Bellota 50% Iberico at 12.9 euros per 100g, facing off against the identically classified product from Viandas de Salamanca at 14.0 euros per 100g.

Perhaps it was just our luck of the draw, but our cut from Viandas de Salamanca came with a higher moisture content, finer meat fibres as well as a stronger nutty flavor. It shouldn’t have been a surprise, but the pricier product won in every category hands down.

It was a delicious but unsubstantial breakfast that had me licking my oily fingers for the residual nutty essence. Fortunately Spanish lunchtime generally doesn’t begin until at least 13:30, which left us room for a second breakfast at Salamanca’s traditional produce market. 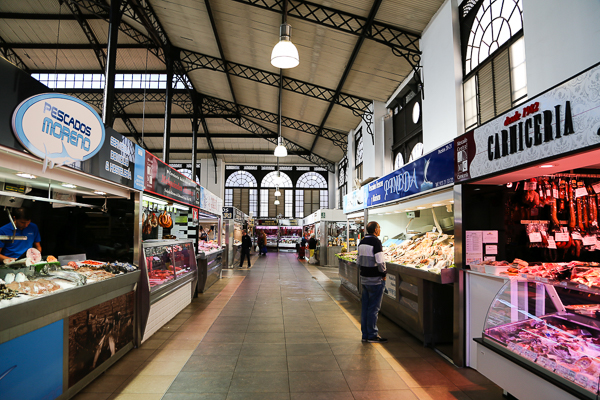 Positioned next to Plaza Mayor is Salamanca’s two-storey Mercado Central where local housewives shop for their daily supply of fresh bread, tomatoes and perhaps some bacalao. For hungry foodies though, Mercado Central is Jamon Central with no less than a dozen specialty ham shops, all flaunting their own stock of locally sourced and cured Jamons and Paletas. Most shops close around 14:00 though, so arrive before lunch if you’re looking for a good deal on top notch ham. 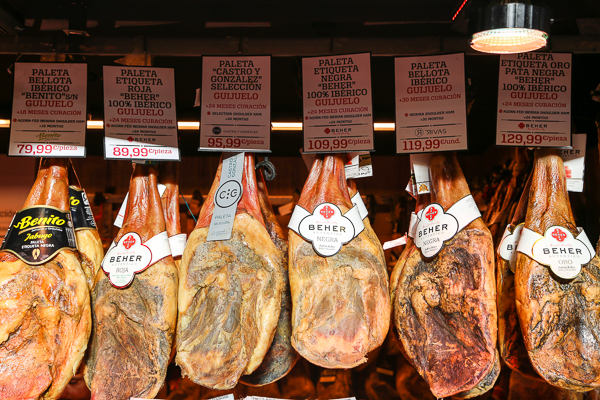 How good of a deal? How about a whole acorn-fed Paleta (front leg) starting from 79.99 euros … per leg! If I were working fulltime in Madrid I would be hauling one home and investing in a ham stand. Too bad I can’t legally import one into Canada. 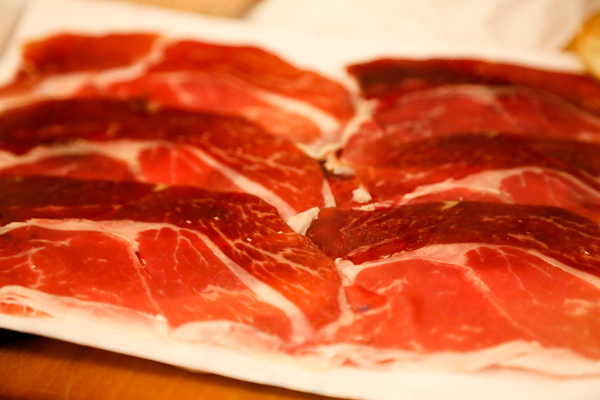 Honest I could hardly tell the difference in taste between this 100% Iberico versus Viandas de Salamanca’s 50% Iberico. Both exhibited that slick, fine texture with the unmistakable oaky flavor of acorns. We had found our holy grail of Spanish Jamon in terms of price-quality-ratio.

For the benefit of readers planning a Spain trip, our ham shopping experience in Salamanca can be summarized as follows:
1. The difference in taste is huge between 25% Iberico and 50%, but barely noticeable between 50% and 100%. 2. Quality is usually proportional to price, but 50% Iberico seems to offer the best price-quality ratio.
3. Go to Mercado Central for the best deals

Aside from charcuteries we also visited a couple of tapas bars in town, serving the rest of the Iberico pig rather than just Jamons and Paletas. 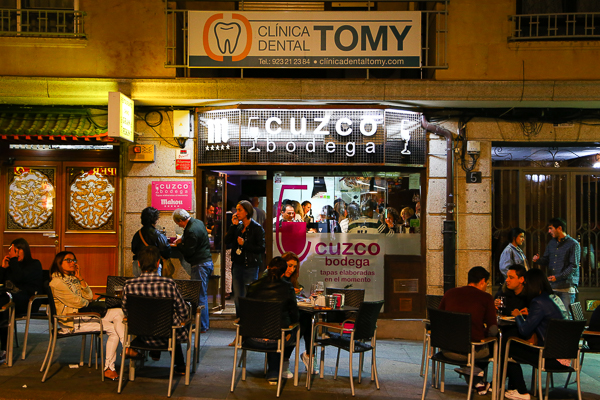 Recommended to us by a local for its creative tapas, this popular taperia was a stone’s throw from Plaza Mayor and a 2-minute walk north of the university. Understandably most of the clientele were cash-strapped students, which helped keep prices down. 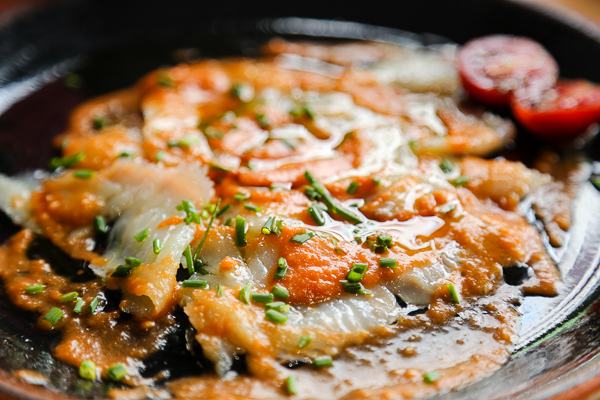 Having been acclimatized to Madrid prices, this refreshing dish of Carpaccio de Bacalao, thin slices of half-cured cod drizzled with a tomato emulsion, smashed all our expectations in terms of quality and size for a rock bottom 3.5 euros.br /> 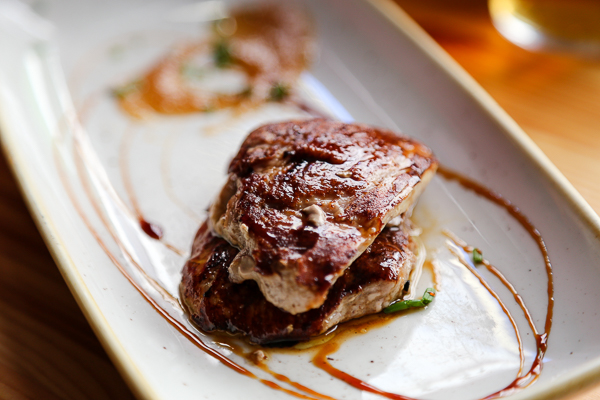 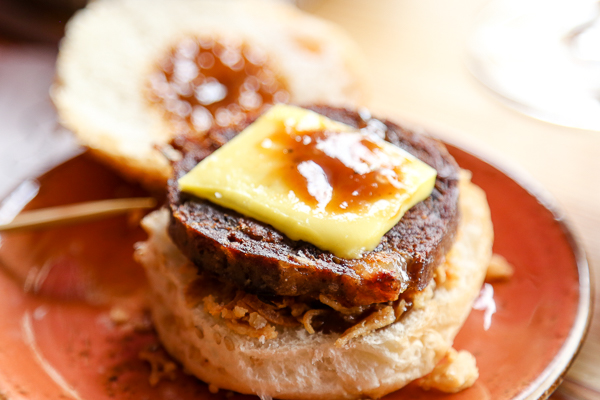 Cuzco Bodega’s small menu featured three different Mini Hamburguesas, or what my Canadian friends would call sliders, with various creative twists such as the pictured cheeseburger with an oxtail patty. 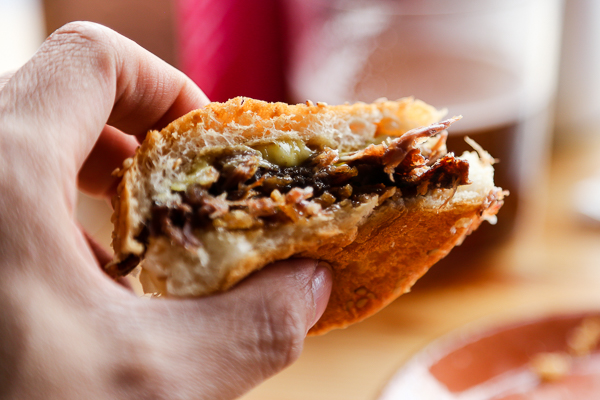 The intense beefy flavor from the deboned oxtail, served with a sauce of caramelized onions, was impressive enough to stop me in the midst of my bite to take this one-handed photo. I wished they made a man-sized version of this miniature wonder. 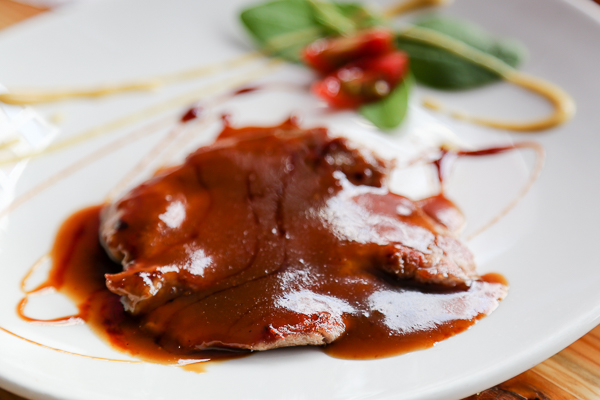 Another star of the meal was this tender yet intensely flavored shoulder steak from the region’s dark-haired Iberico pork, matched perfectly with an equally rich glaze of Pedro Ximenez, the aromatic dessert sherry from Spain’s deep south. In fact the meaty taste was so intense that you could have blindfolded me and told me it was beef. 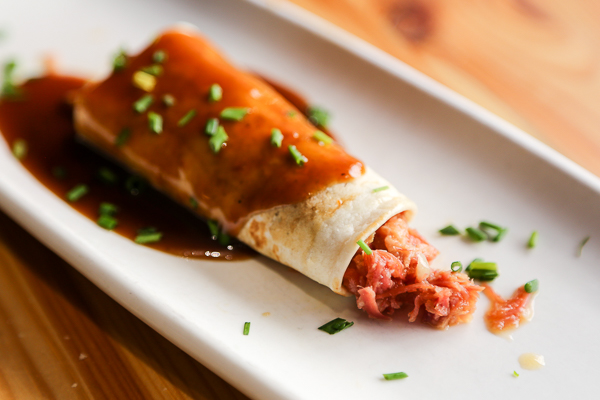 Duck confit has always been one of my wife’s faves, and her wish came true not in the form of a full leg, but in a boneless, rillette-like form inside a burrito. 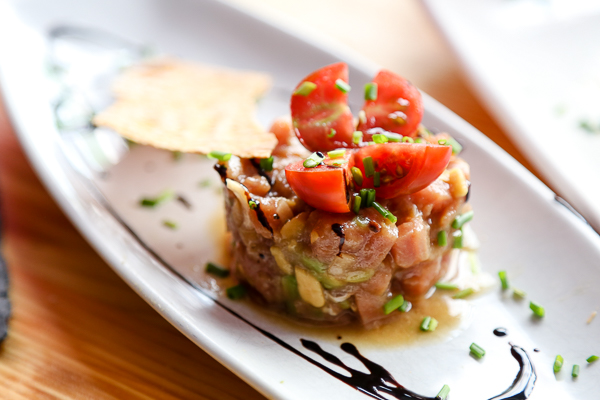 We’re almost full by the time our tuna tartar arrived drizzled with aged vinegar and sprinkled with fragrant pine nuts and chives. It was easy to over-order when everything was under 4 euros. 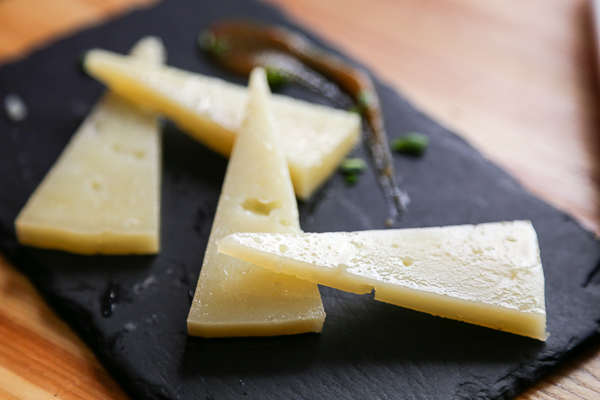 I was left to finished this final plate of goat cheese on my own, my wife having thrown in her napkin already. What I enjoyed most about this little taperia was its price-quality-ratio, as student-friendly prices did not compromise the freshness and quality of raw ingredients. I guess we have to thank Salamanca’s 800-year-old university for that.

For dinner we returned to the same neighborhood of cervecerias and tapas joints, now packed even fuller of rowdy students on a busy Friday night. Apparently the cheap prices we enjoyed for lunch were quite the norm in this university town. 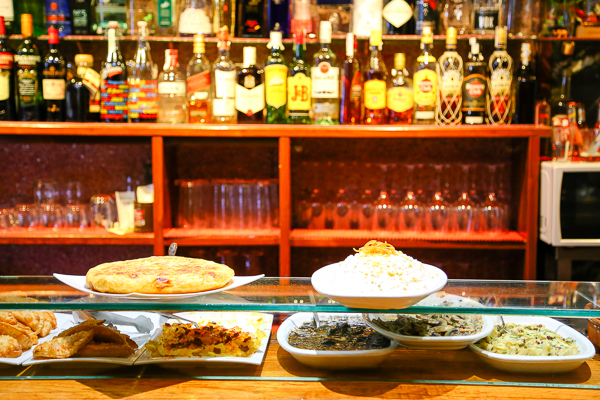 While Cuzco Bodega was the type of trendy gastropub you might encounter in Madrid’s Lavapies, Tiempo de Vinos better fit the bill of a classic tapas bar with a cavernous interior, exposed 18th century timber and a bar counter parading its daily rotation of pinchos. Once again we were thrilled by the prices in this college town: a caña of beer started at 1.5 euros, and just 0.6 euros more if you want it accompanied by a pincho of tortilla or a montadito. Our most expensive tapa cost 4 euros, which helps explain our tableful of dishes. 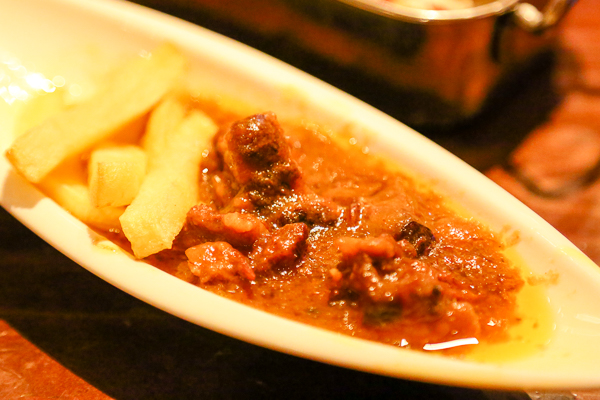 A small plate of deboned oxtail, slow-braised in wine and served with a few fries for mopping up the sauce, started our meal of 6 tapas and 1 main dish. I don’t think we had any stomach room left for bread. 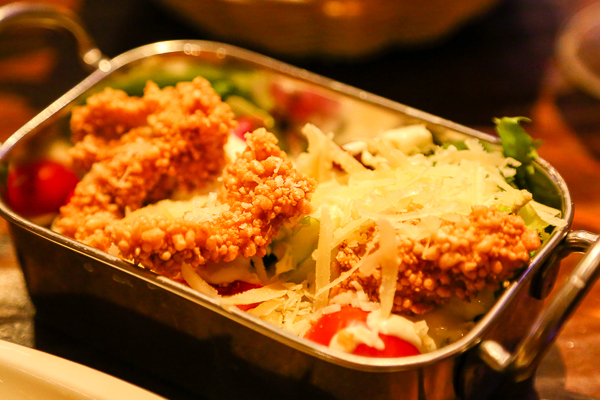 To be honest we ordered this gourmet salad for the greens rather than the chicken, as we had not seen much veggies for the past two weeks in Spain aside from fried padron peppers. The spinach turned out alright, but it was the remarkably crunchy batter on the chicken strips that really delighted our tastebuds. 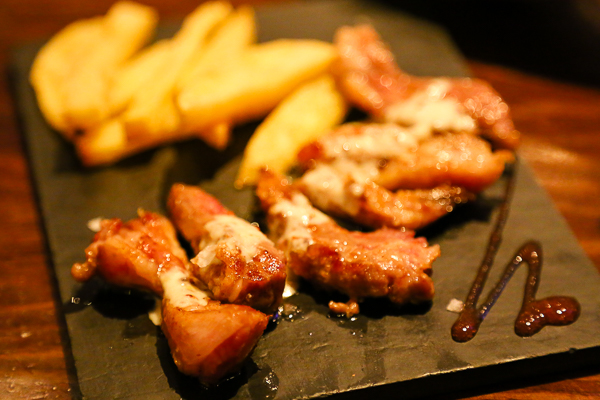 My favorite of the evening was this succulent fillet of pork shoulder, served medium well with a sauce of aged mustard, for a mind-boggling price of 2.9 euros! I normally avoid pork at anything less than well done, but this pluma was so juicy and flavorsome that I could hardly take my fork off. 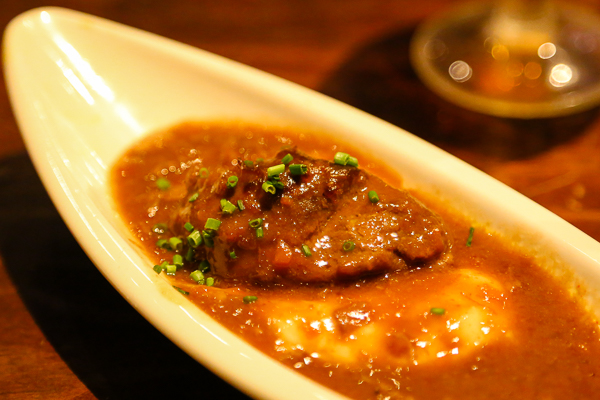 This Carrillera or beef cheek was nothing but well done, slow-braised in sweet port wine for that classic Iberian aroma and also priced at less than 3 euros. 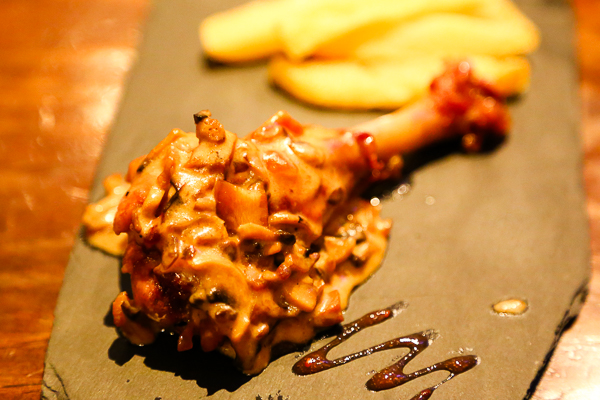 My wife did find her duck leg at last, coated here with a seriously thick sauce of creamy mushrooms and bacon. The price? 3 euros again. 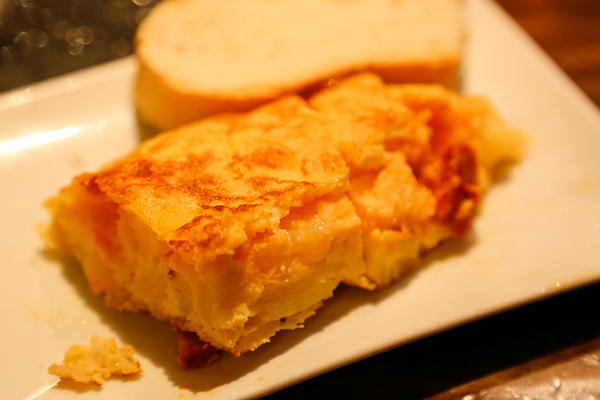 As mentioned above, clients could always order a caña of beer (1.5 euros) and get a daily pincho, in this case a generous slice of Tortilla de Patatas, for only 0.6 euros. I could easily envision a younger me chilling here every day afterschool if I had taken an exchange year in Spain.

6 tapas and we had spent only 16 euros on food so far. Frankly we could have stopped right here and perhaps take the savings to Viandas de Salamanca for some takeout ham, but we decided to splurge on one irresistible item on the menu … 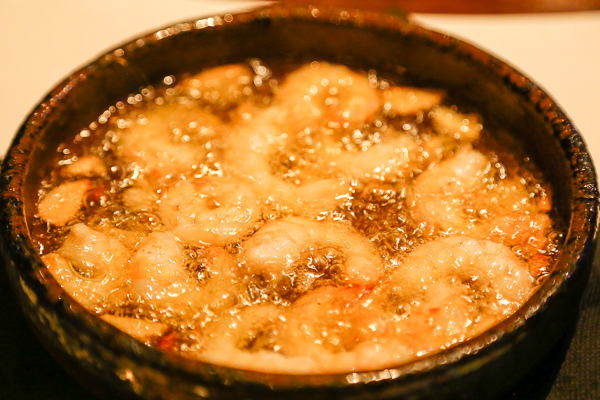 Gambas al Ajillo, our favorite Spanish dish of all. This one dish cost nearly the same as the above 6 tapas combined, but it hardly mattered. The flavor was nowhere as spectacular as our first encounter with this dish at Madrid’s Casa del Abuelo; then again we’ve never had Spanish garlic shrimps that we didn’t enjoy. 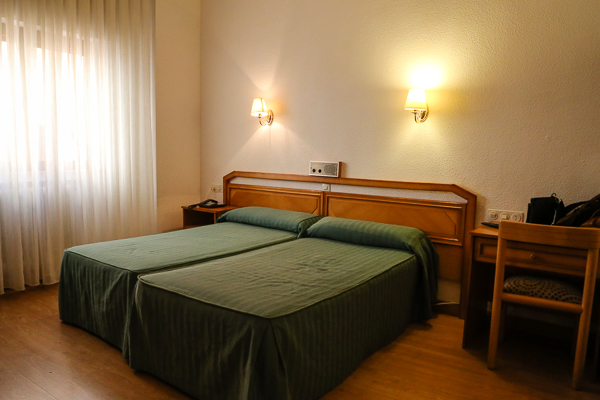 It was time to return to the spacious but air condition-less (the booking website lied!) Hotel Amefa and pack up for the final leg of our Spanish journey. The next morning we would head north to Zamora for a day-trip, then take our final AVE train to Santiago de Compostela.