Salamanca is Gorgeous. Why Haven’t Foreigners Heard of It? 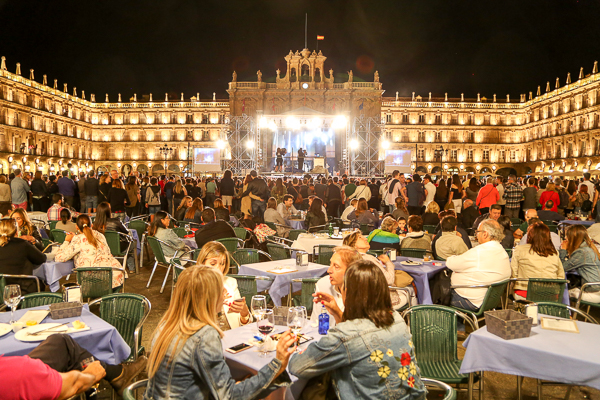 Visually stunning and flaunting a vivacious and youthful ambience, Salamanca was the locale for many of my favorite photos on this 16-day trip across Spain. In fact this might just be my favorite mid-sized city in Spain, even though most of my friends and coworkers in Canada have never heard of it. 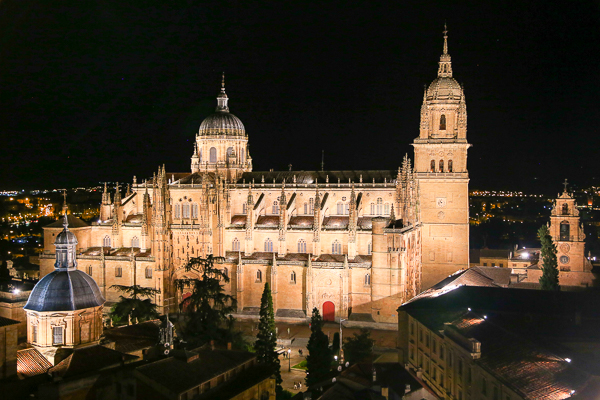 Here we have one of the prettiest university towns in the world, in fact Europe’s third oldest university behind Bologna and Oxford, dating from the Middle Ages and blossoming into the Spanish Empire’s centre of higher learning in its golden era. And when combined with the magical flavour of the most exquisite Spanish hams handcrafted within the province, Salamanca’s charm was too much for me to resist. 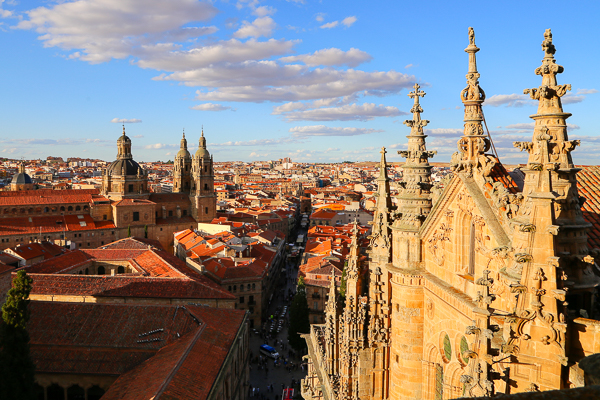 For a city of its beauty and historic importance, it is almost inexplicable that most non-Spaniards are unaware of this provincial capital in the west of the Castilian highlands. Most have heard of Valencia and Seville and just about every tourist knows Bilbao and Santiago de Compostela. Even smaller cities like Toledo and Segovia get more attention from independent travelers. 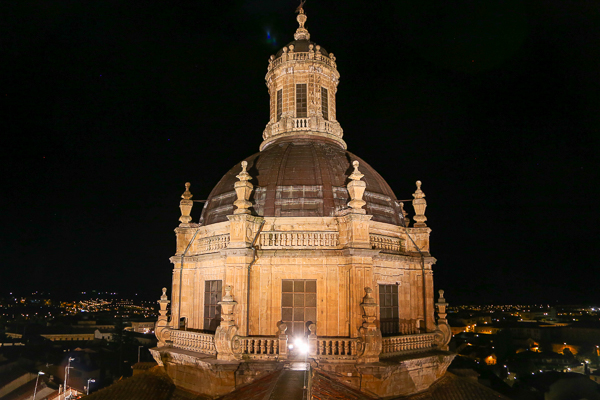 But Salamanca is not an obscure small town in the middle of nowhere — we’re talking a vibrant city of 200,000 residents with good connections by road and rail, within day-trip distance from Madrid by express trains. I can’t think of any good reason for why it gets shunned by most visitors to Spain, except for its separation from the main Barcelona – Madrid – Andalusia tourist circuit. 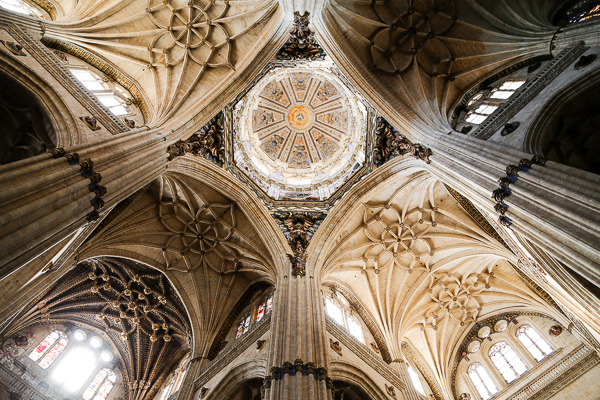 Instead of a rushed day-trip from Madrid, we opted for two leisurely nights in town between the medieval fortress-city of Avila and our final destination of Santiago de Compostela in remote Galicia. This is a rare stretch of our journey across Spain where highway bus connections — 1.5 hours from Avila and 1 hour onward to Zamora — worked better than Renfe’s train network. We arrived on a summery afternoon in mid September at the cobblestone streets of Old Town Salamanca, lined with food-and-beer stands and swarming with after-class university students at every corner. I thought it was the norm until I got the lowdown from an exchange student from Oregon — somehow we just walked into the biggest festival of the year in Salamanca. 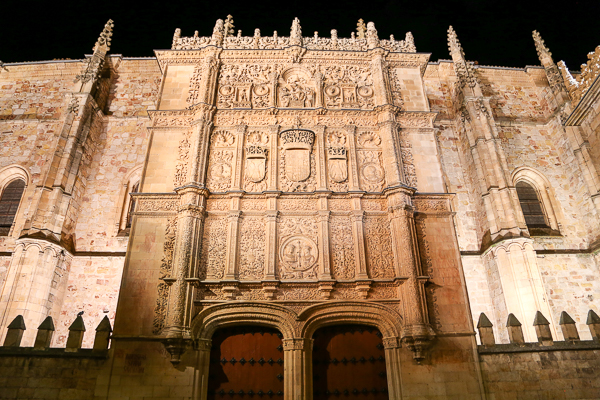 Barely 50m from the university’s magnificent facade were the makeshift bars of the raucous Feria de Salamanca, a 400-year-old festival involving an entire week of traditional ceremonies, sprawling stands of cheap street food, plus free music on the enchanting Plaza Mayor on a nightly basis. As anyone who has ever attended college knows, books and midterms rarely prevail against the appeal of festivities and booze. 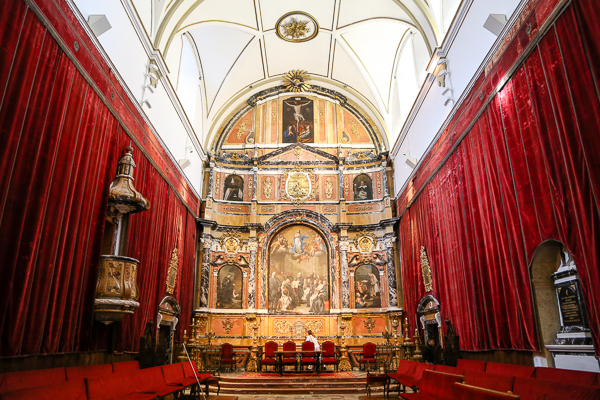 Apparently these Spanish Ferias have proven mutually amicable with world-class scholastic work for centuries. After 800 years the University of Salamanca remains one of the most prestigious universities in Spain, which predictably attracts its share of top academics especially in humanities and law. 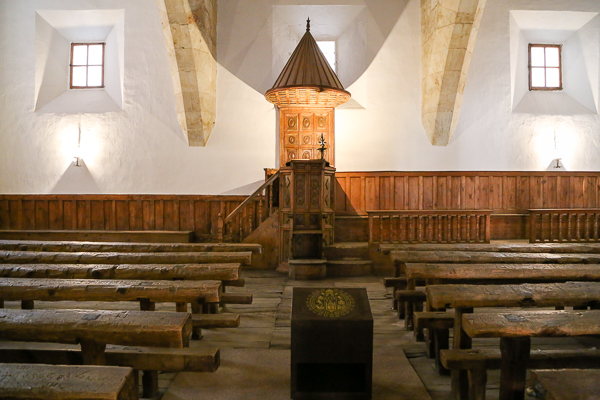 An inspiration for modern day freshmen is the historic lecture podium associated with the legendary Fray Luis de Leon, the city’s favorite adopted son and the symbol of academic freedom when he rose victorious against the near-absolute power of 16th century Inquisition. 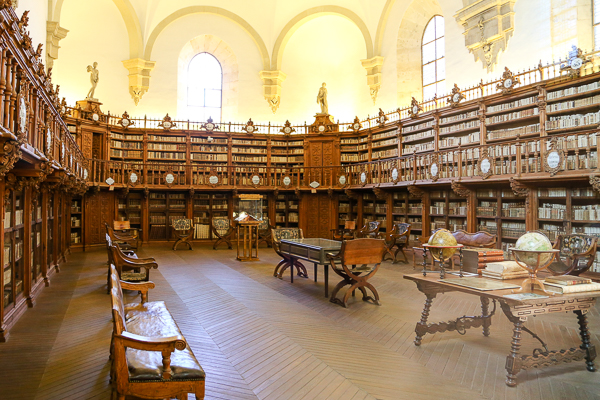 Off-limit to non-academic visitors is the historic library that still holds priceless collections of manuscripts and codices from the Renaissance and beyond, passed down through generations of theologians and scholars since the university’s founding in Year 1218, roughly the same time as the rise of Genghis Khan in the east. 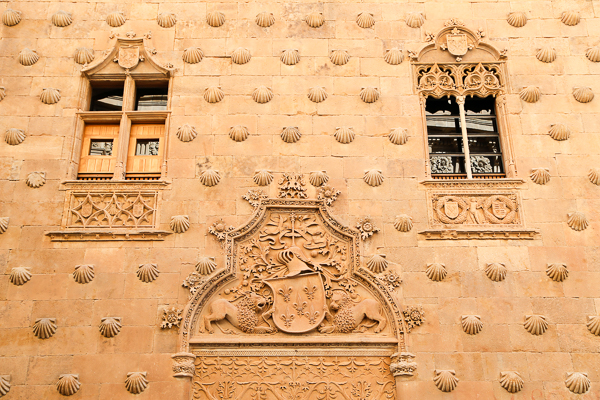 Among the few non-university and non-religiously affiliated monuments is the curious Casa de las Conchas, a stately 16th century palace adorn with scallop shells signifying the Order of Santiago on its facade. In recent years the building has been reincarnated as the city’s public library. 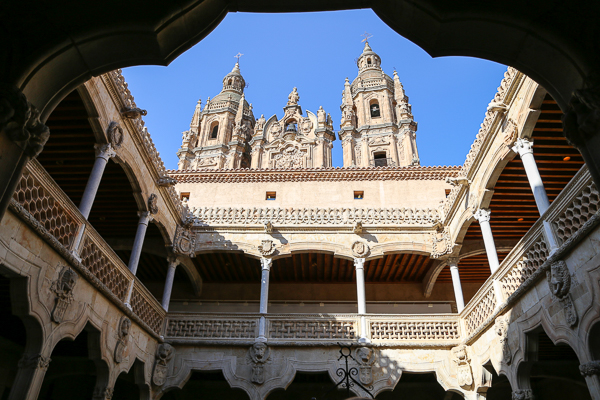 View of Clerecia’s twin Baroque towers from the courtyard of Casa de las Conchas. The library is known as a hangout for the thousands of foreign students arriving every year to learn the graceful form of Castilian Spanish for which the Salmantinos are known, in the same way that Oxford and Eton have become branded for teaching the Queen’s English. 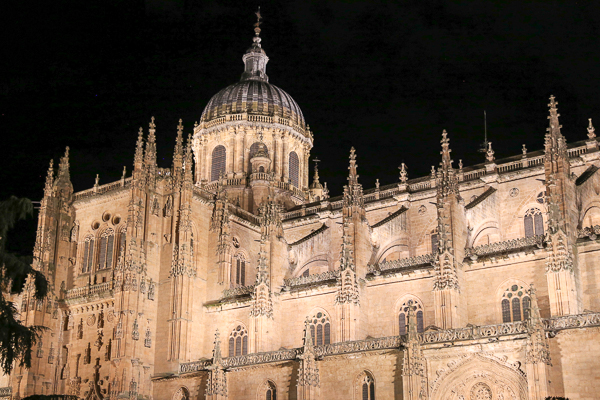 The absolutely unmissible monument is the city’s pair of conjoined cathedrals, one fully Gothic and one partially Baroque, literally towering above the main building of University of Salamanca and, ironically, the large-than-life statue of Fray Luis de Leon on the university patio. 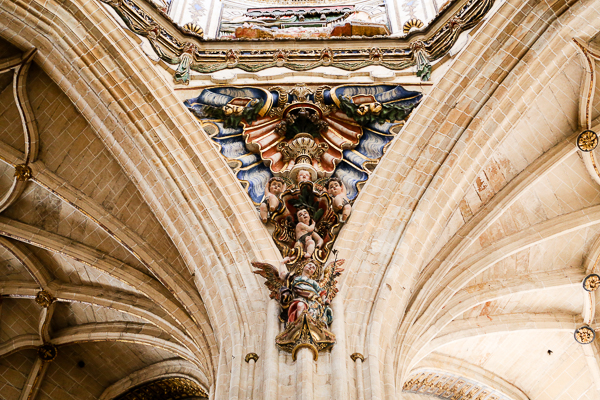 Considered one of the last Gothic cathedrals built in Spain, Salamanca’s New Cathedral is a blend of enormous Gothic columns embellished with the pictured Baroque spandrels and crowned with a storied Baroque cupola. 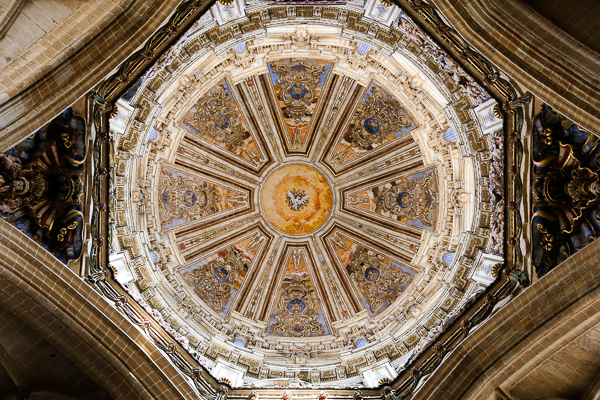 Every October 31, daredevils would congregate outside to scale the precipitous dome, 10 storeys or so in the air, in a 250-year-old ritual dating back to the infamous 1755 Lisbon Earthquake that seriously damaged the cathedral and prompted annual inspections of the bell tower. 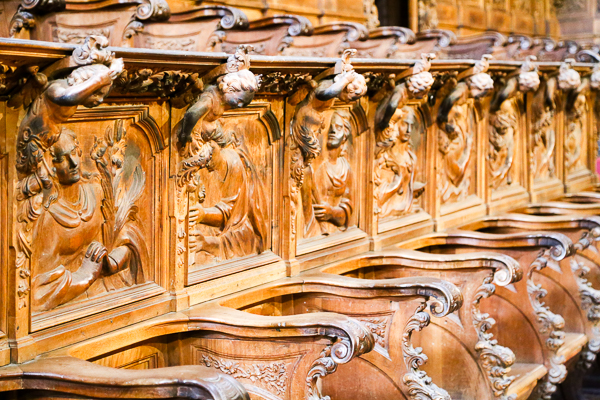 While the New Cathedral’s gorgeous choir continues to fulfill its function on special occasions, the Old Cathedral, separated from its 16th century replacement only by one reinforced wall shared by both structures, is no longer open to the public. 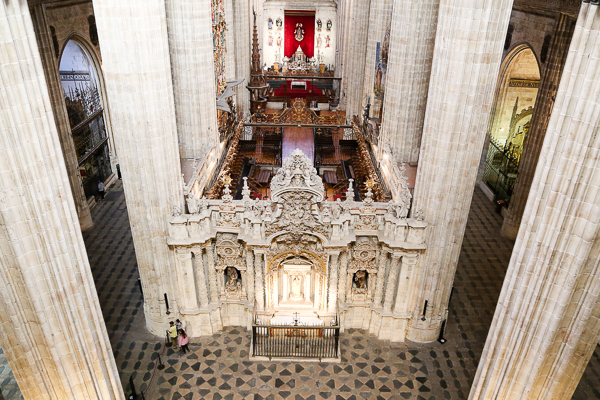 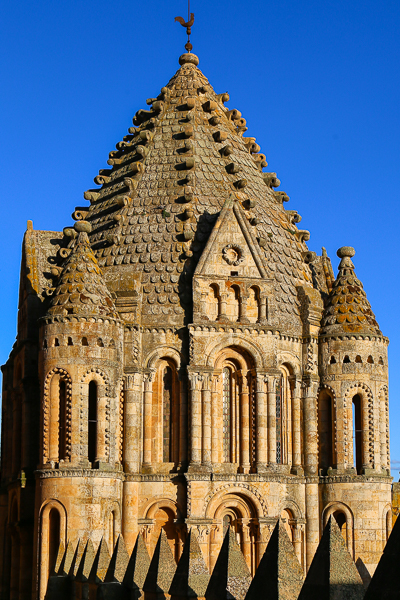 An intimate view of the Old Cathedral’s 12th century Romanesque towers was the award for climbing hundreds of steep, claustrophobic steps to reach the porticoes shared by both cathedrals. 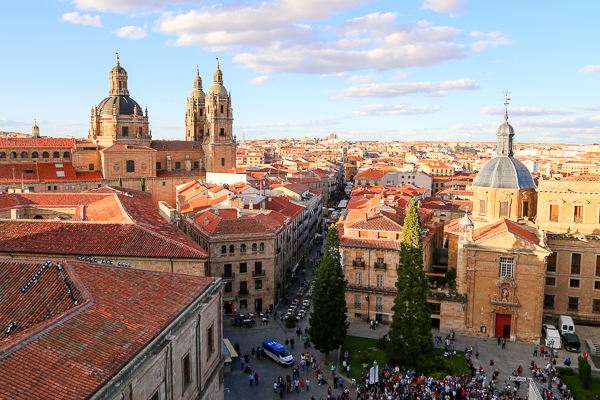 A panorama towards Plaza Mayor at sunset shows precisely why the historic centre of Salamanca, built uniformly of the region’s golden sandstone, is nicknamed La Dorada. 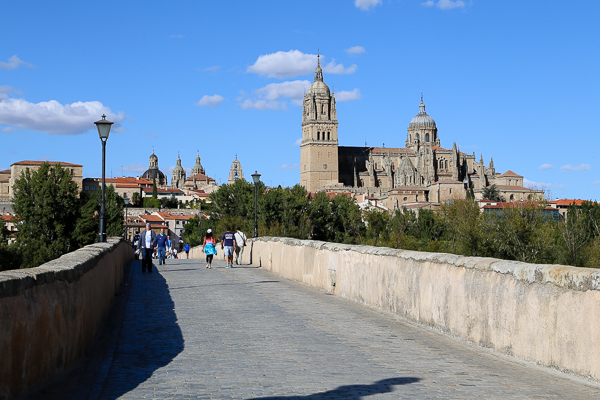 Marking the historic city limits south of the Cathedral is perhaps the oldest surviving monument of all, an impressive 2000-year-old stone bridge that once formed part of the Roman Empire’s westernmost road network. We’re now a full kilometre from Plaza Mayor, which gives an idea of the vastness of Salamanca’s historic quarter. 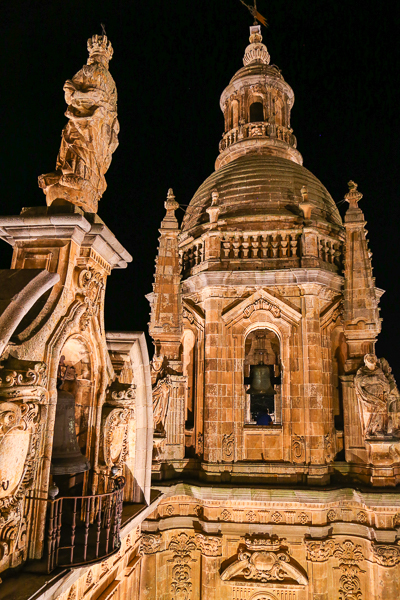 For readers planning to arrive on a weekend, do not miss the chance to climb the Clerecia’s twin towers for a night vista of the Renaissance town. 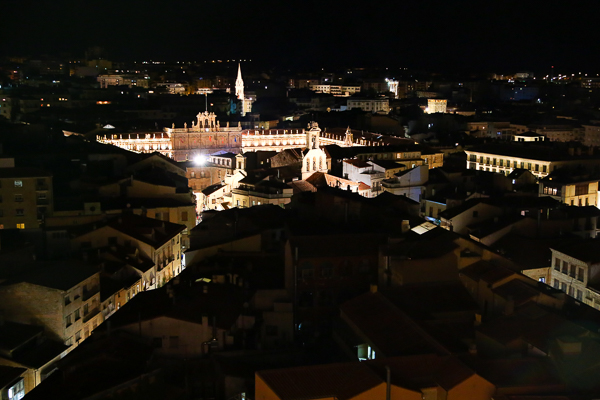 A northerly panorama revealed that all roads led to Plaza Mayor, especially on the final night of the weeklong Feria de Salamanca, culminating with a massive open-air concert on one of Spain’s most beautiful town squares. 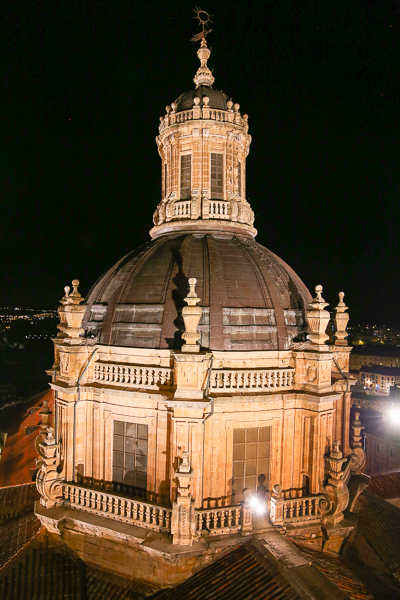 It was nearly 22:00 when we finally peeled our eyes off Clerecia’s handsome Baroque dome and strolled back to our hotel. Two nights in town was barely enough cover most of the major attractions at this medieval university town, not to mention the lip-smacking regional cuisine. 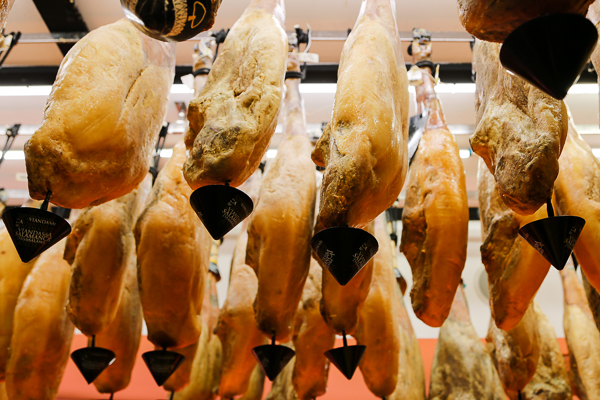 What about Salamanca’s nationally-famous Jamon Ibericos you ask? Here is just a teaser photo … reviews for restaurants and ham shops will come in the next post!