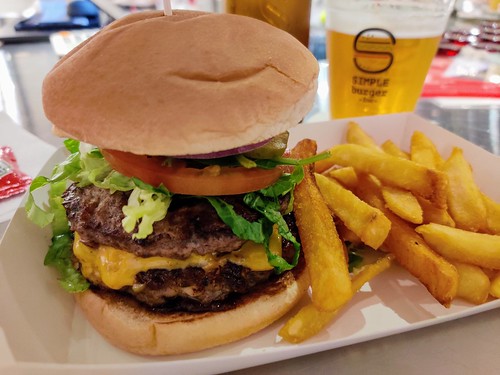 Yeah, these guys seem to have a fascination for capital letters. On the former grounds of The Butcher’s Kitchen in the North Atrium of Suntec City Mall now sits the iSTEAKS Diner (3 Temasek Boulevard #02-472, 6285-8839), who apparently started at a kopi tiam in Serangoon. I wasn’t in the mood for a steak though, so it was good that they were also serving these cheaper SIMPLEburgers via a separate menu.

There were some minor distinctions between some of the menu items that I had to ask about. On the iSTEAKS side, some cuts were “char-grilled” versus “steakhouse charred,” with the latter meaning that they seared them first to keep the juices inside whereas the former was just on an open flame. On the SIMPLEburgers side, they had a “beef ” burger versus a “natural beef” burger, with the latter being pure beef while the former had fillers like onions. I tried to get a taste of both by grabbing a cheaper beef burger while adding a “natural beef” patty on top of it.

The natural beef patty was definitely better than the one at Skirt & Dirt, but I had trouble tasting the other one because it was covered in cheese and sitting on some kind of sweet sauce underneath. It certainly wasn’t Shake Shack nor Five Guys, but I still ate it quickly and was able to get a cheap beer to go with it. Next time, I’ll ask for the rösti instead of those boring hard fries and will also see if they can omit the cheese and sauce.

A Circuit Breaker Meal from Lerouy on Stanley Street

Trying Out the “Donki Pot” from Don Don Donki