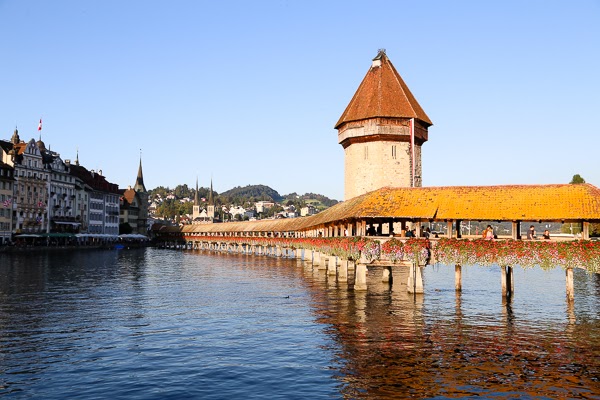 If pictures told the full story, this would have been the most romantic sunset stroll at Switzerland’s most famous lakeshore promenade, flanked by medieval half-timber houses and crowned by an iconic wooden bridge that graces the cover of every Lucerne brochure. 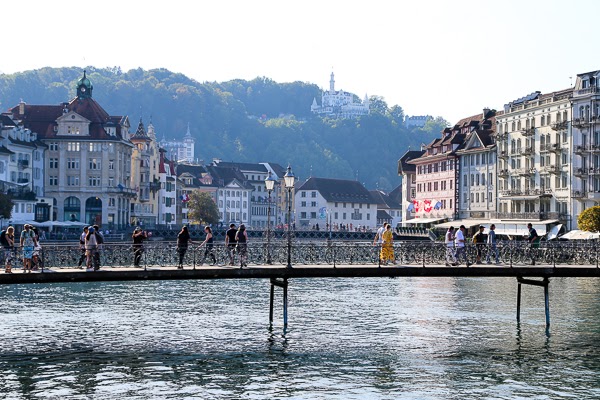 And it was, if we simply ignored the flocks of international tourists swarming the gorgeous Kapellbrücke as the epicentre. After all this was Lucerne, an essential stop for all first-time visitors to Switzerland and especially important for multi-day coach tours passing between Zürich to the north and the Berner Oberland to the southwest. 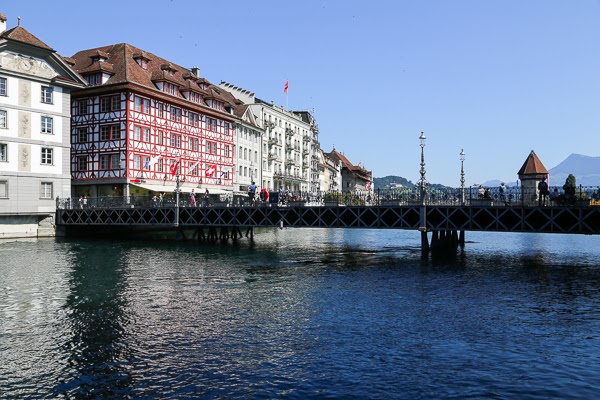 Prominent in Swiss history as one of the original members of the Confederation, compact Lucerne punches way above its weight in international tourism for a small city of merely 80,000 — comparable to a small borough of London — with 9 million annual visitors. This gives Lucerne the enviable problem of more day-trippers per resident than any other city in Switzerland, approaching the level of Venice or Dubrovnik. 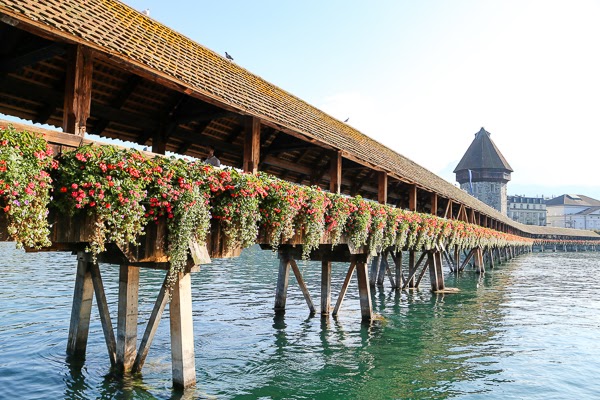 And we were guilty of contributing to that statistics on this last leg of our 16-day Swiss Grand Circle, opting to spend our final night at this picturesque town rather than metropolitan Zürich — for which I don’t think anyone would blame us! — ahead of our morning flight out of Zürich Airport. 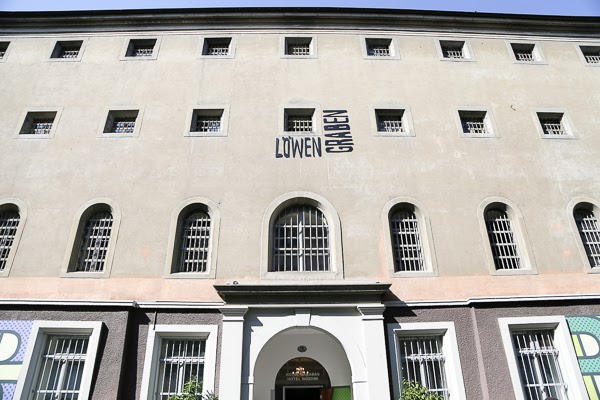 In any case, any guilt that we deserved was atoned by spending our night behind bars at the city’s former central prison, now converted into a hotel named after its most famous resident who served his time after declining compulsory military service in the 1970s. 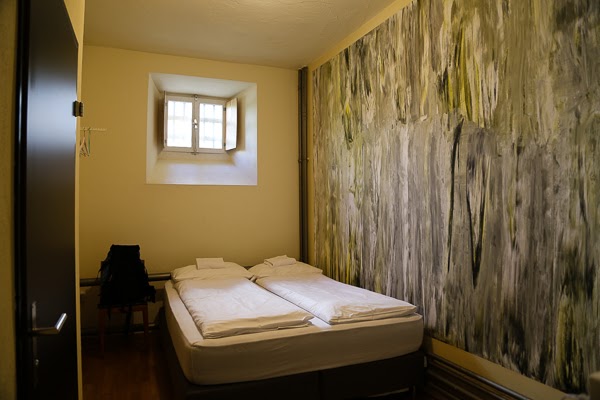 And the hotel assigned us exactly the jail cell that held the infamous Barabas himself, featuring a melancholic mural by the incarcerated artist. The heavy steel doors, thick walls and small windows behind bars were non-negotiable. 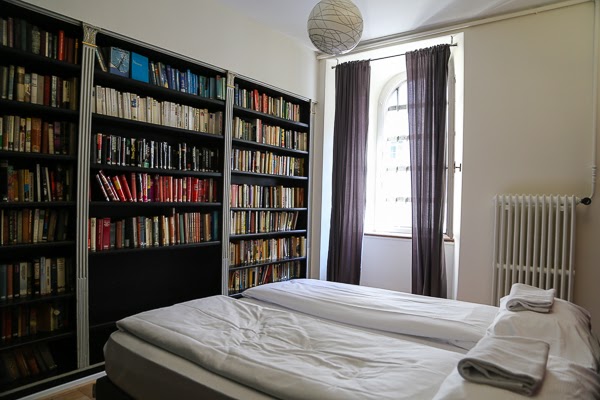 Except we wanted a larger bed than the small double with a useless bunk provided by the Barabas cell. The hotel staff were kind enough to move us to the library, still behind bars and fitted now with two single beds pushed together. Perusing the 1960s collection of non-fictions that once entertained the cellmates was our evening entertainment in the absence of television. 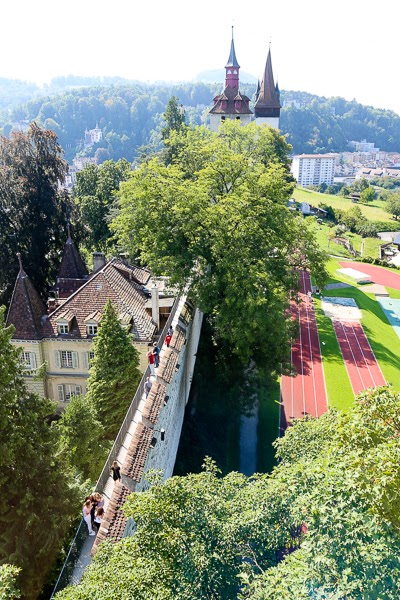 Steering clear of tour crowds congregating around the Lion Monument, we spent our Sunday afternoon among local families and lovebirds atop Lucerne’s medieval ramparts, still largely navigable starting from the Nölliturm at the western edge of the historic quarter. 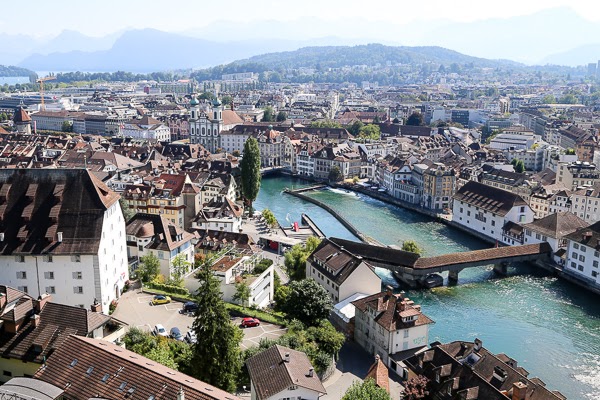 Arguably the best panorama in town can be viewed for free from the crenellated turret of the 15th century Männliturm, boasting a sweeping view of Lucerne’s five-storey skyline across River Reuss in the direction of the mighty Pilatus, less than 10 km to the south as the bird flies. 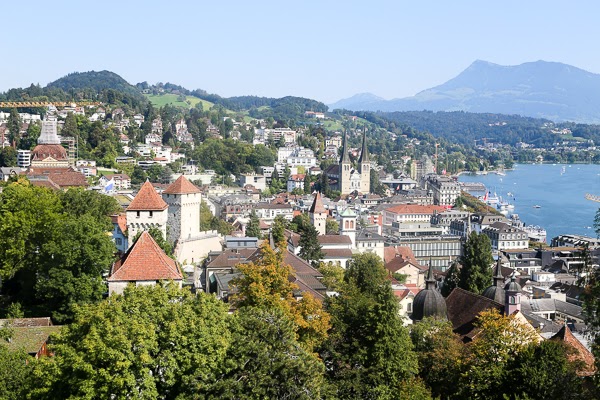 Four of the the nine watchtowers are open to the public, including an exhibition of medieval clockwork inside the 550-year-old Zytturm. The navigable section of the walls would end after Dächliturm, at the northeastern edge of the historic quarter and within walking distance to the twin Gothic towers of St. Leodegar. 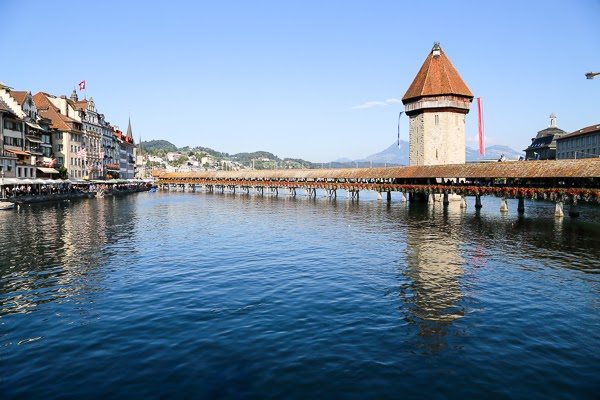 From there it was a short walk to Lucerne’s world-famous landmark, the 14th century arcaded footbridge of Kapellbrücke guarded by the even older Wasserturm, the city’s medieval defense against raiders approaching from the lake. 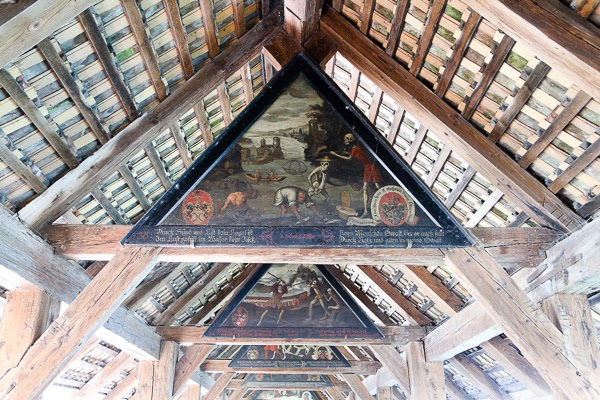 A renewed wooden roof now shelters a number of gift shops, underneath the triangular decorative panels dating back to the 17th century and only partially surviving the most recent fire in 1993 when two-thirds of the 650-year-old bridge — the oldest truss bridge in the world — was destroyed. 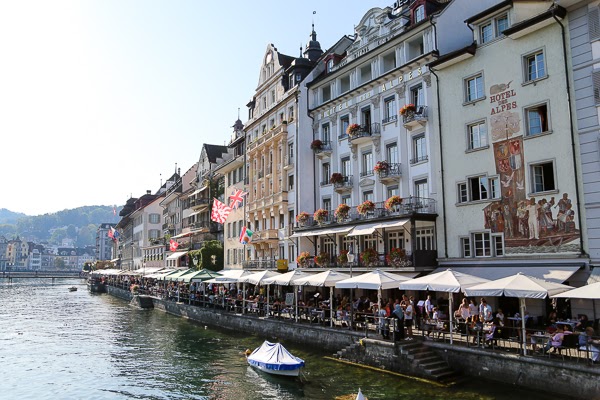 Like most of Switzerland Lucerne’s dining options were few on Sundays, limited mainly to the train station area and the tourism district north of the Reuss. We opted for an early meal before a sunset walk along the lakeshore towards the KKL. 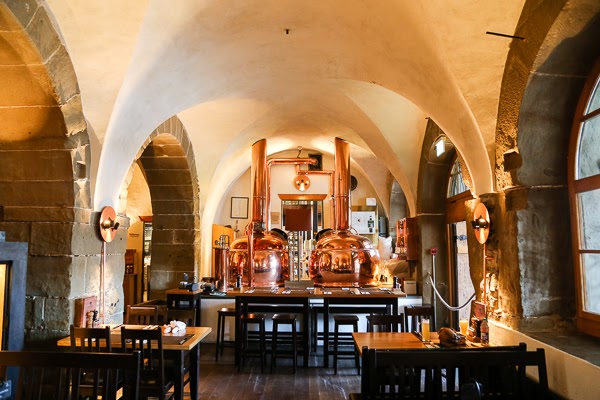 One centrally located option was the Rathaus Brauerei, occupying the vaulted basement of the 400-year-old townhall right beneath the city council meetings. From the copper vats in the background flowed the brewery’s seasonal and year-round drafts, including a cloudy Zwickelbier with a hint of citrus perfect for a late summer day. 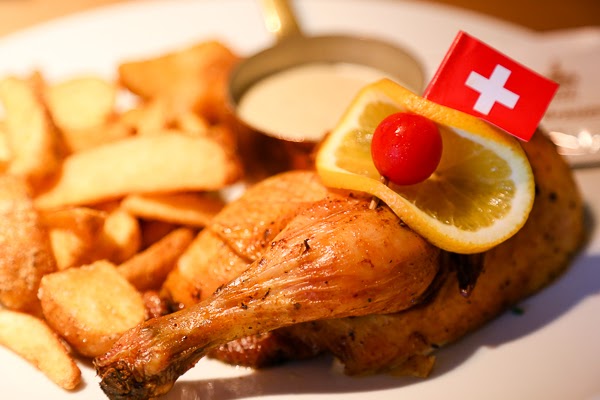 I must have never gotten tired of Swiss rotisserie chicken — usually the supermarket variety from Migros or Coop — as I craved it once again for my last meal in Switzerland. But this was no cheap take-out: the flesh was superbly tender and moist and served with a buttery herbed cream for dipping. Great chicken and an even better sauce which I mopped up with the fries. 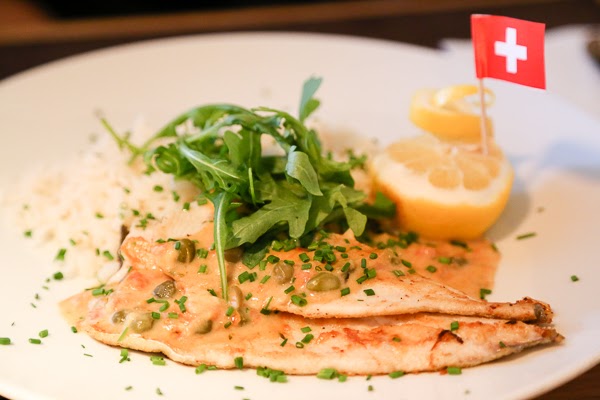 For my wife, a local rainbow trout from Lake Lucerne, sauteed and served with another creamy sauce of tomatoes and capers. Given the lack of choices for a Sunday evening, this actually turned out better than expected. 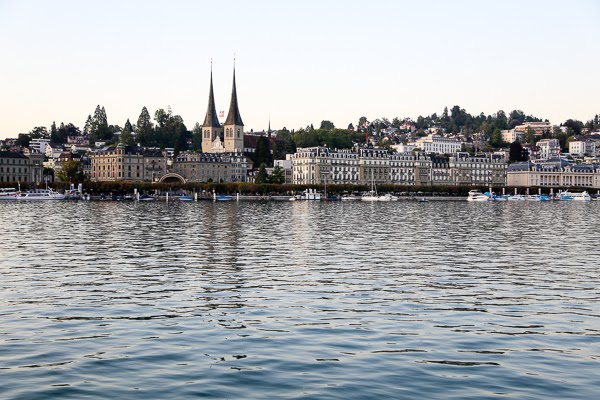 Our after-dinner stroll took us along the shoreline to the glassy KKL, Lucerne’s high profile concert hall and its 21st century landmark on the water. From the opposite shore beckoned the twin spires of St. Leodegar and neighbouring Grand Casino. The few stores opened on Sundays had mostly closed by 18:00, save for a handful on the underground level of the neighbouring Lucerne Station. 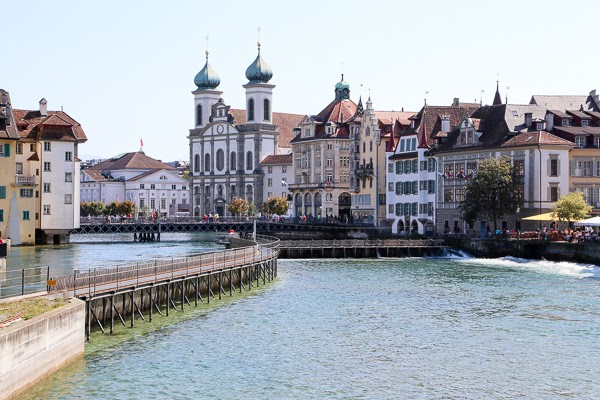 This wraps up our Swiss Grand Circle in a quick 16 days, too short to do justice to a compact nation blessed with some of the world’s most stunning yet most accessible alpine scenery. I would have loved one more day in Bern, and definitely more time in the Berner Oberland for the Schynige Platte-to-First hike, and perhaps one more in Appenzell …

Easy Hikes in the Dolomites – Part 3: St. Magdalena in Villnoess