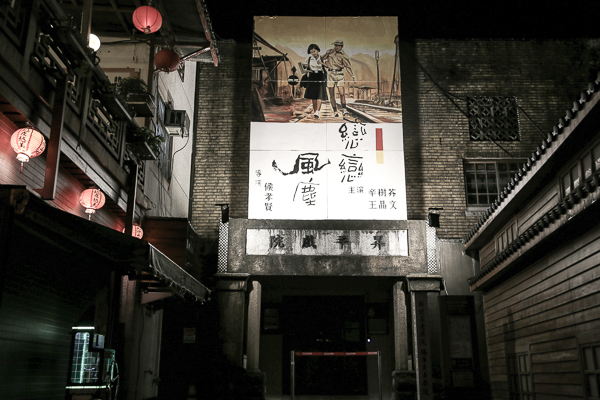 Infamous for its hordes of day-tripping tourists for its photogenicity, historic Jiufen returned to its 1950s charm after dusk with its deserted cobblestone stairways under dim red lanterns. Sadly this was also our final night before reaching Taipei on our round-island tour of Taiwan by public transport. 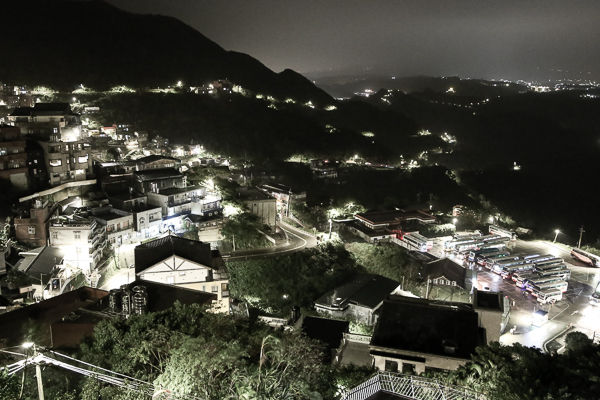 In case you’re wondering how we managed to capture a strangely serene Jiufen without the usual armies of international visitors, try staying past 19:00 when the majority of tour buses depart and the cheesy souvenir shops gradually close. Only a handful of eateries stay open, but that’s exactly the small town charm. 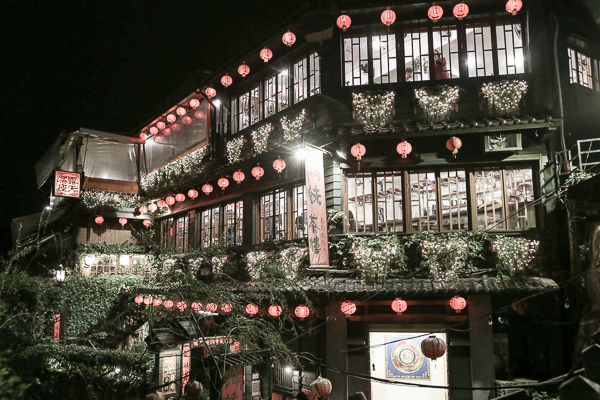 Now an immensely popular destination for Taipei residents and Mainland Chinese tourists alike, Jiufen lived its storied past as a glitzy gold rush town in the Japanese colonial era and even hosted a concentration camp for British POWs captured in Singapore during WWII. 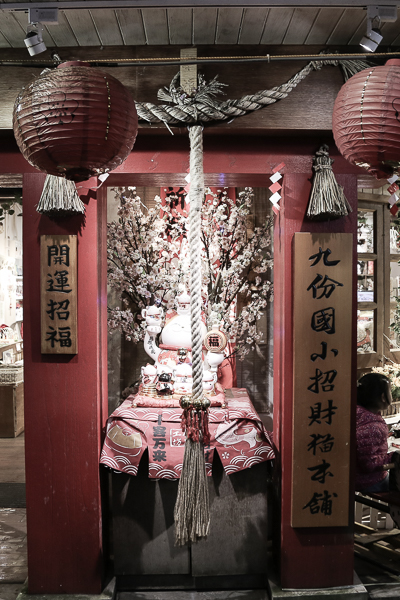 The fortunes of Jiufen declined for decades when the most prolific gold mine in Taiwanese history finally ran dry, only to be revived as the filming locale for A City of Sadness, now considered one of the greatest Taiwanese films ever made. Fans started to arrive in droves for its nostalgic townscape, and Jiufen was reinvented as one of Northern Taiwan’s greatest tourist draws. 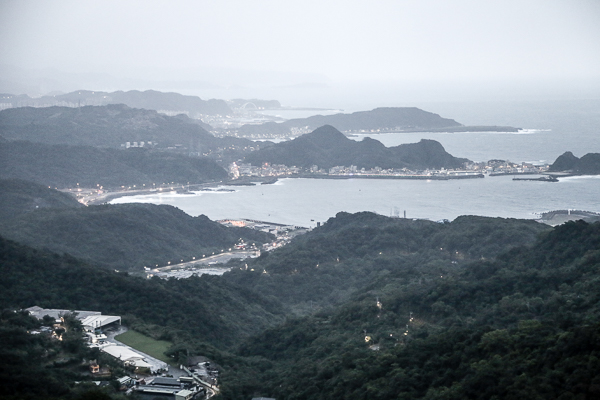 Inaccessible by land until the discovery of gold in late 19th century, Jiufen was planted on a precipitous mountainside overlooking the northern Taiwanese coastline where the precious quarry was shipped back to Japanese mainland in the colonial era. Independent visitors like ourselves now arrive mostly by bus, 20 minutes from our previous homebase of Ruifang. 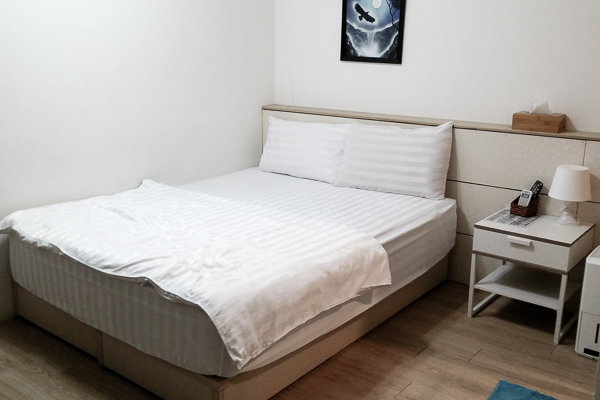 Steep would describe not only the terrain at Jiufen, but also the most expensive room prices of our entire round-island trip as our spartan room in a private guesthouse cost almost as much as our proper hotel in Taipei. In retrospect we should have stayed an extra night at our spacious and conveniently located apartment at Ruifang, with easy access to Jiufen by frequent buses. 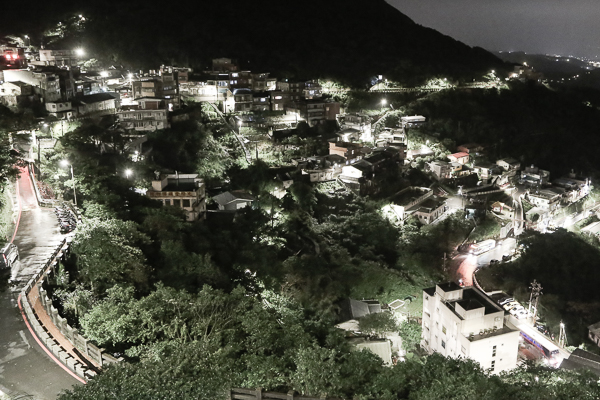 The hilly landscape also affords panoramic views from just about anywhere along the town’s upper sections, encapsulated at a series of viewing platforms. At this hour only the odd restaurants and guesthouses remained illuminated, along with the treacherous switchbacks and hairpin turns leading up to this hill town. 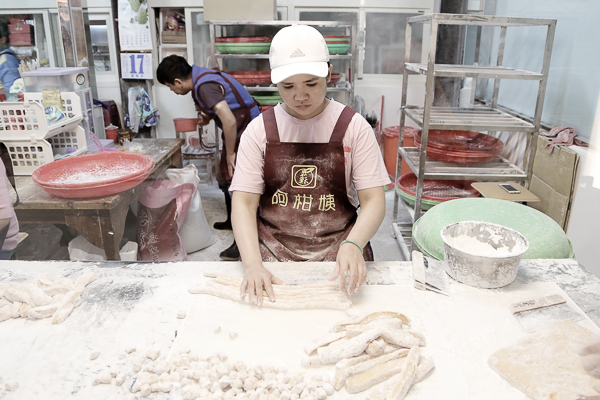 For once we started dinner with a dessert, in fact one of our favorite desserts of the 11-day trip at the renowned Ah Gan Taro Balls (Location Map), one of two exceedingly popular shops in Jiufen specializing in the Taiwanese sweet soup of glutinous rice balls. 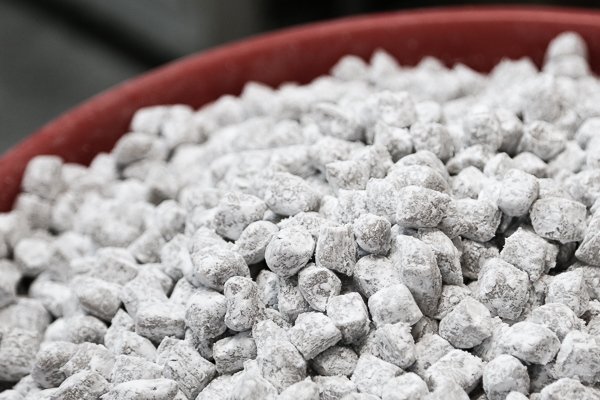 Expertly hand-kneaded in front of the clientele for that fresh chewiness, the so-called rice balls are actually cylindrical rather than spherical, and can be infused with the a variety of flavors aside from the classic taro. Hundreds of customers cycle through every day, especially dating couples enjoying the sunset from the panoramic windows. 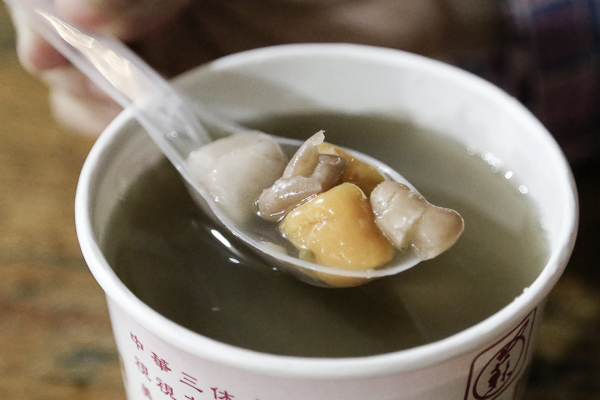 Our bowl of Taro Balls with Assorted Beans (TWD 45 / CAD$2) was a colourful potpourri of glutinous rice balls infused with purple taro, yellow yam and green cudweed, as well as an assortment of azuki, mung and kidney beans. What I enjoyed most was the subtle flavour of taro and yam in the chewy rice balls, luscious yet not overly sweetened. 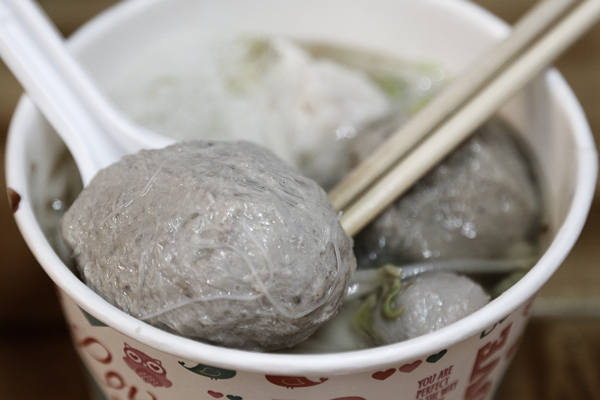 For main course we dropped by a conventional fishball maker for the filling blue-collar favorite of meatballs in glass noodles, and were rewarded with not only the most ginormous meatball ever, but an eye-opening diversity of fishballs from the Southern Taiwanese favorite of milkfish to codfish to cuttlefish and sailfish. 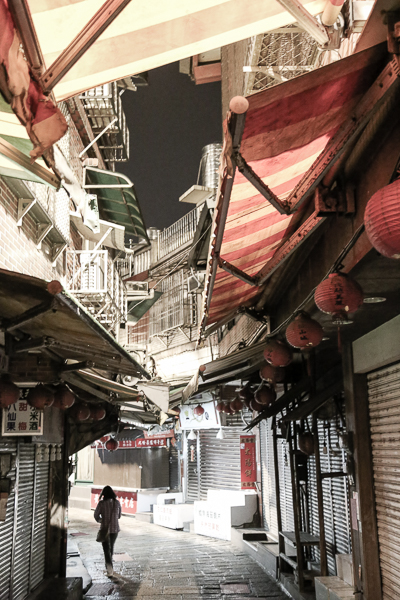 By the end of dinner the predominantly Mainland Chinese tourist hordes that swamped Jishan Street from end to end had magically disappeared, restoring the cobblestone alleys to a pre-tourism quietude rarely experienced by day-trippers from Taipei. This was our main reason for spending the night in the hill town. 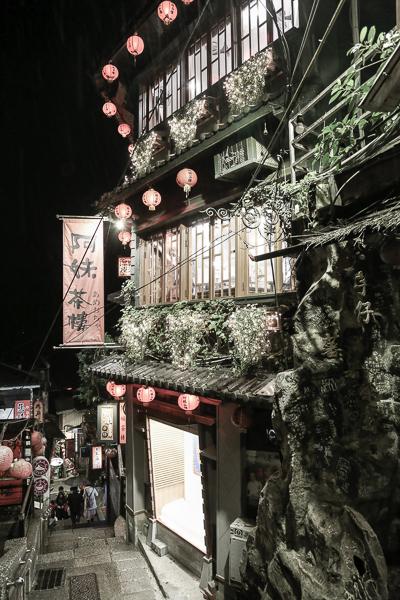 Those who stay behind predictably congregate at the distinctive A-Mei Teahouse, persistently rumoured to be the blueprint for the Aburaya bathhouse in Miyazaki Hayao’s Spirited Away. Despite dismissal of the speculation by Miyazaki himself, scores of Japanese Anime fans still gathered in front of the signature red lanterns for selfies on these extremely steep and slippery stairs in the rain. 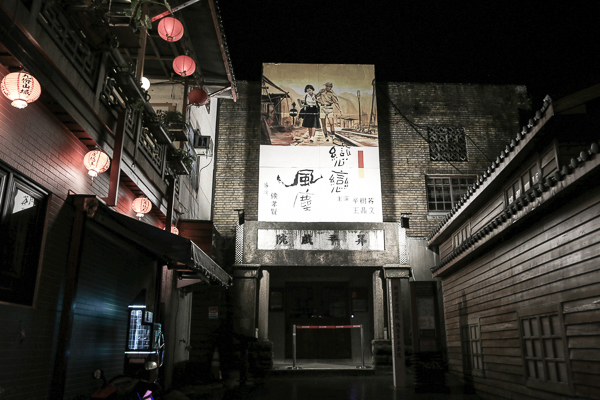 Facing the teahouse is the meticulously restored Shengping Theatre, Taiwan’s first ever cinema opened during the reign of Japanese Emperor Meiji in Jiufen’s golden age. Abandoned for a quarter century before being reincarnated as a museum, the theatre still occasionally screens classic black-and-white films and hosts music recitals. 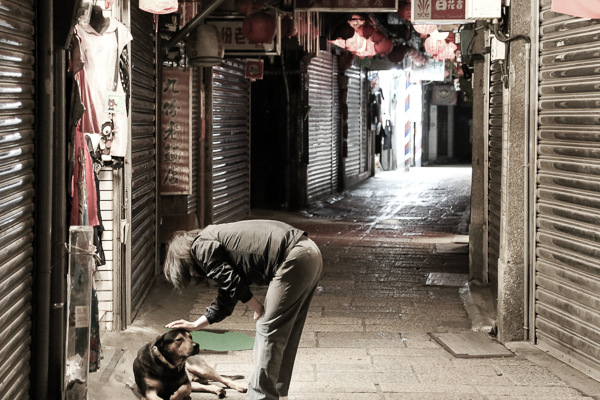 A shopkeeper stopped to pamper one of her several free-roaming dogs at the end of a hectic day. Just about every shop on the pedestrianized Jishan Street was closed after 19:30, though some double-functioned as entrances to the owners’ residences attached to the back. Casual tourists may not realize, but Jiufen is still a traditional market town by design. 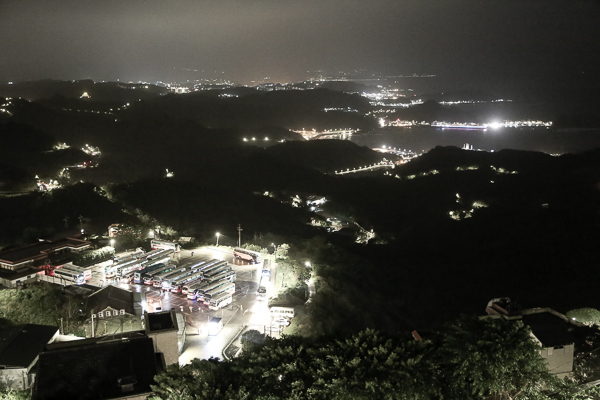 The night panorama over the Keelung Coast revealed its string of illuminated fishing ports. The rocky coastline would get increasingly rugged until it all culminates at the famous Yehliu Geopark, the symbol of Northern Taiwan and our destination next morning. 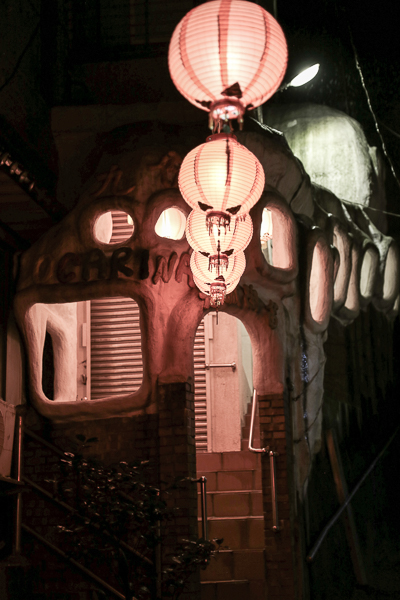 While we did take advantage of the quaint nighttime atmosphere, I still would have preferred to stay overnight at Ruifang rather than Jiufen. The next morning we took an early bus to Keelung en route to Yehliu, before finally reaching Taipei in the late afternoon for our final destination of the 11-day trip.

Jiufen is an easy day-trip from Taipei via Ruifang Station, 35 minutes from Taipei Station by express trains. Diagonally across Ruifang Station, the frequent Buses 788/825/827/1062 can all reach Jiufen in roughly 20 minutes. Alternatively, some travelers prefer the convenience of taking Bus 1062 outside Zhongxiao Fuxing metro station in Taipei, taking a slow 2 hours to arrive at Jiufen. I personally prefer the quicker train/bus transfer especially with electronic payment (e.g. EasyCard) on hand.

Another trick that we learned was that Ruifang makes a much better homebase than Jiufen if you are planning to explore more of Northeastern Taiwan on a round-island voyage like ourselves. Not only is Ruifang just 20 minutes from Jiufen by bus, it is also the starting point of a historic rail spur for the series of quaint small town in the direction of Pingxi/Shifen.