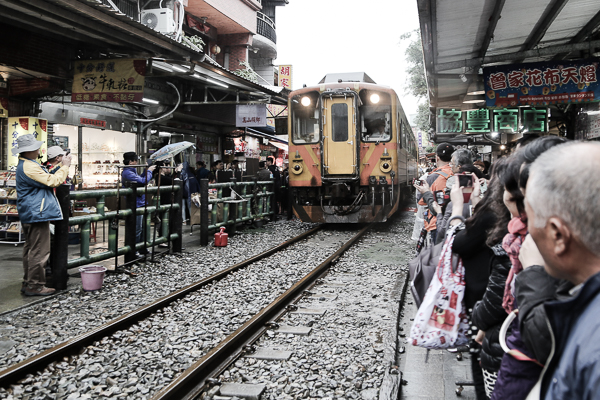 Cheap peasant gourmet — 10 vendors in all — was the highlight of a charming rail spur linking working-class Ruifang with a chain of historic small towns in the direction of Pingxi, best known as the sky lantern capital of Taiwan. 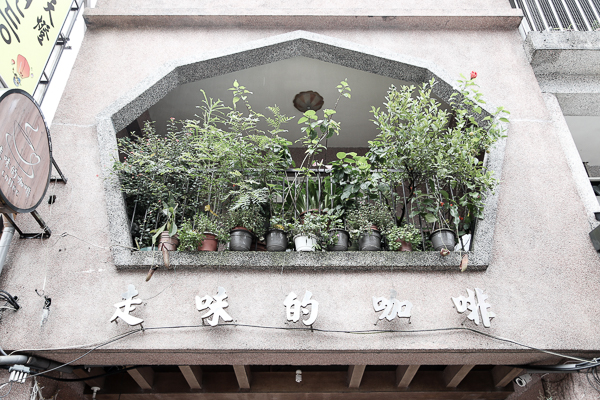 On Day 8 of our round Taiwan journey by train, we inched closer and closer back to our starting point of Taipei after circling the Taiwanese east coast from Kenting to Taitung to Hualien, now rejoining the beaten path at the northeastern corner of Taiwan. Searching for a convenient homebase for our excursions to popular Pingxi and Jiufen, we discovered the hidden gem of Ruifang purely by chance. 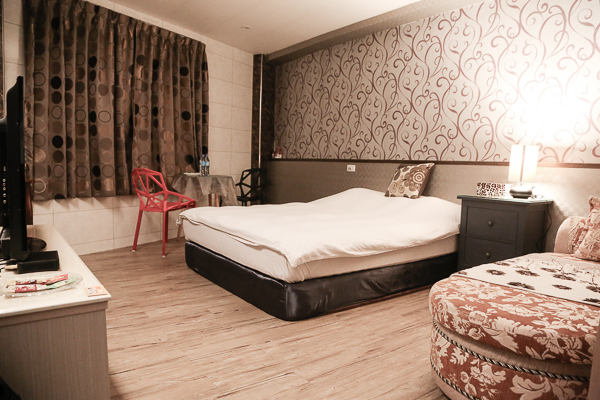 We would have stayed two nights at this excellent apartment known as Orange House, 5 minutes’ walk from Ruifang Station, if I hadn’t pre-booked a room at Jiufen the next night. Not only is Ruifang a convenient transportation hub between Pingxi and Jiufen, it also boasts some of Greater Taipei’s best traditional cuisine, mostly under one roof. 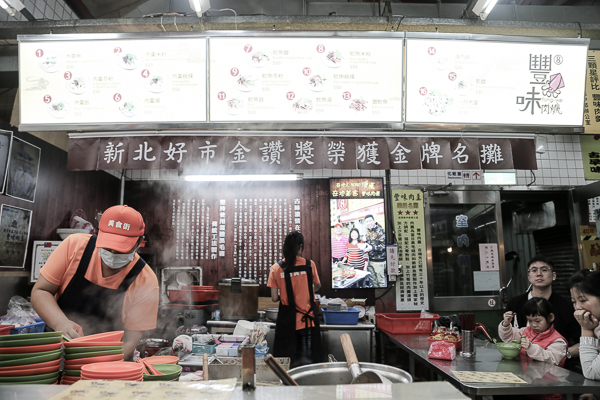 Superior to most night markets, Ruifang Food Street is the culmination of generations of street food tradition now gentrified by the local government in the form of an indoor food court. Every tenant brings decades of fan base from its former existence as a street stall, exemplified by this 40-year-old institution known as Fengwei Meat Soup. 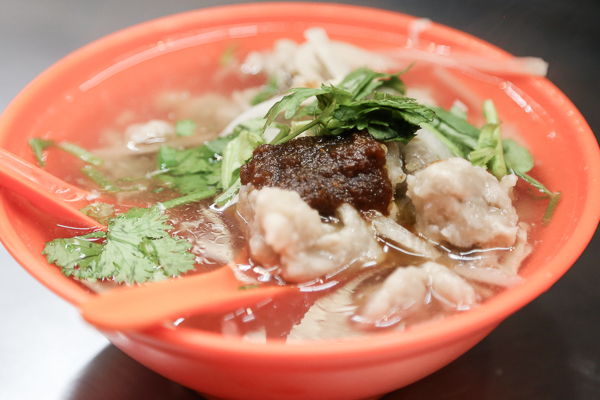 A cheap TWD50 (CAD$2.2) buys an outstanding bowl of Rougeng, the Taiwanese blue-collar favorite consisting of a rough skinless sausage of pork and fish paste, served here in a thick broth with julienned bamboo shoots and topped with a dollop of zesty satay paste. 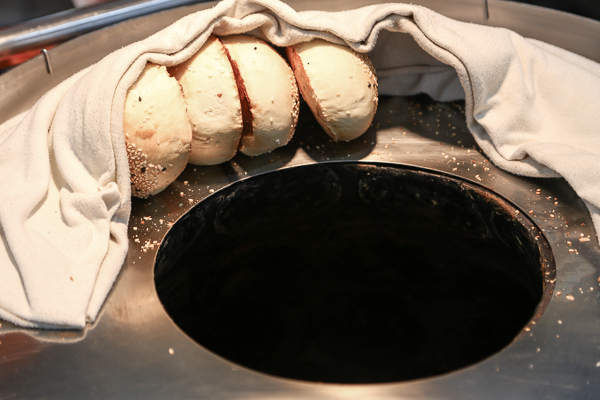 Even more popular among the neighborhood kids are Hokkienese Pepper Biscuits from Lin’s, hand-kneaded in house and generously stuffed with a filling meat patty before being roasted in the custom-built cylindrical oven, for TWD 45 (CAD$2) a piece. 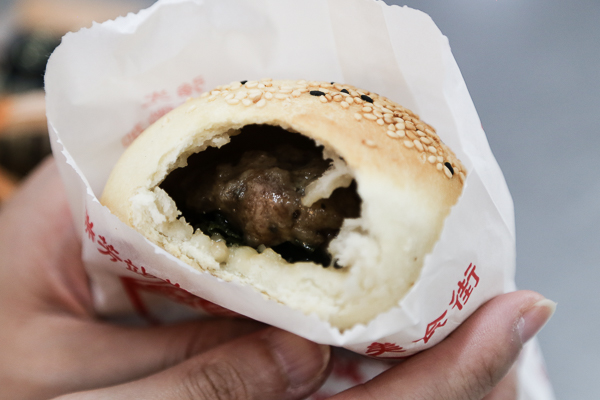 A release of scalding steam rises as you bite open the flakey pastry shell, revealing the plump pork patty floating in its own juices, flavored with green scallions and a combination of black and white peppercorns. This entire batch of biscuits were gone within 30 minutes after emerging from the oven. 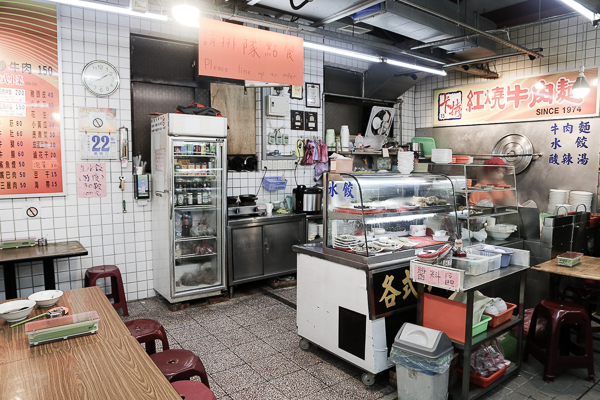 Another decades-old establishment, Kate (pronounced Kar-Ter) is one of two legendary beef noodle specialists in Ruifang along with its archrival Fu Ge, just two blocks north on Minsheng Street. According to local gossip the two noodle masters parted ways a generation ago, each perfecting its own soup base from countless hours of slow extraction from beef bones. 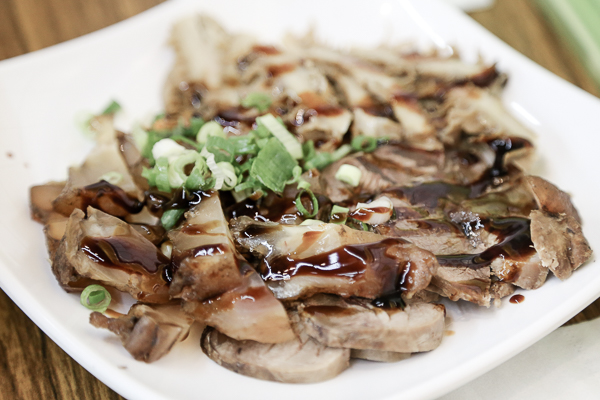 Barely half full from the meat soup and pepper biscuit, we started with a cold dish of sliced beef shanks, chewy tendons and honeycomb tripes, all seasoned generously with thick Taiwanese soy paste. 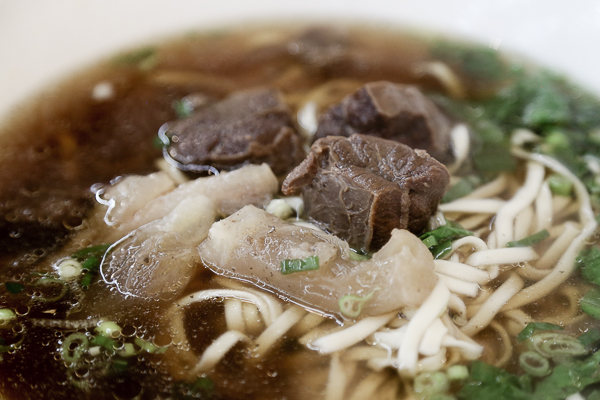 Our staple for the evening was this signature bowl of Beef Noodles with Half Meat and Half Tendons, not the cheapest at TWD 180 (CAD$7.8) but chock full of tenderly braised beef shanks and gelatin-rich sinews. Along with a dish of blanched yam leaves, one large bowl was filling enough for the two of us.

Some street stalls became gentrified into the above indoor market; others carry on as modest, semi-mobile carts off the side of the road, occupying the same street corner for half a century. 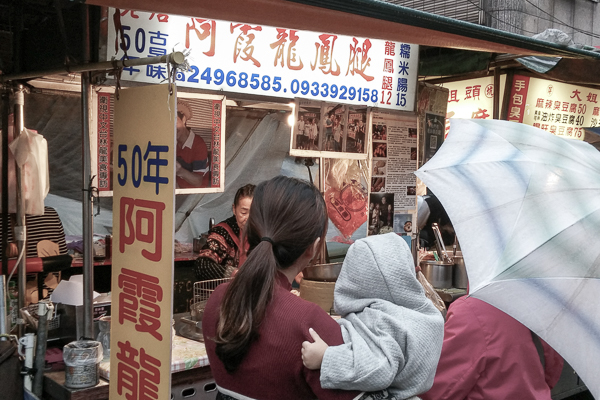 This humble street cart is perhaps the most famous culinary institution in Ruifang, a 50-year-old hawker serving an exquisite local invention known by the fanciful name of Longfengtui, or Dragon-and-Phoenix Leg. It contains no dragon or phoenix meat of course, and it’s not even a leg but a deep-fried crépinette, surprisingly similar in concept yet exotically different from the French version. 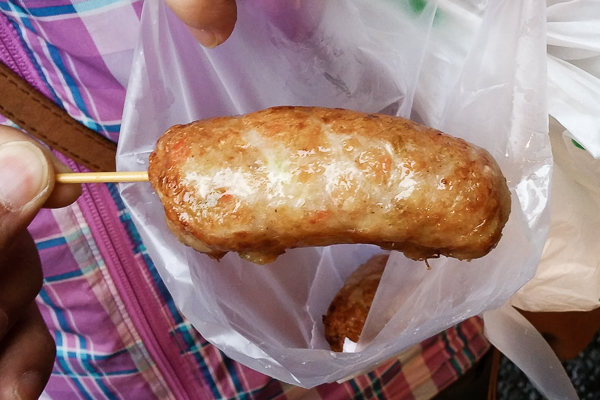 It’s the most scrumptious sausage comprised of shark meat paste, minced pork, onions and cabbage, wrapped in pork caul fat and deep-fried to order. At the impossible price of just TWD 12 (CAD$0.5) each, this has to be my top recommendation for any foodie passing through Ruifang en route to Jiufen or Pingxi.

For fellow travelers planning on a visit, Ah Hsia’s stall for Dragon-and-Phoenix Leg is located on Minsheng Street as indicated on this location map. There are several stalls in the same block specializing on the same item, so refer to the above picture on what Ah Hsia’s cart looks like. 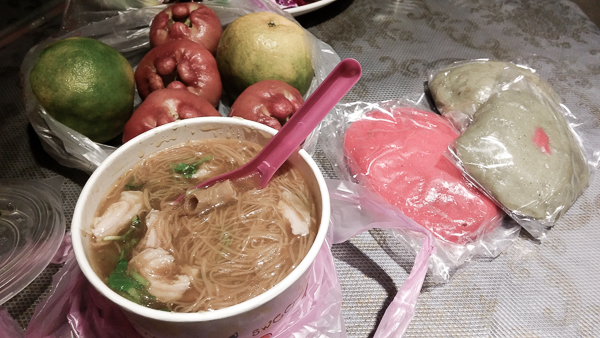 For breakfast we picked up a variety of items from Ruifang’s traditional wet market (see location map), including a bowl of rice noodles with pork intestine and squid, along with three Hakka-style glutinous rice cakes with fillings of peanuts or minced pork to fuel our morning. We would leave our heavy luggages at the apartment for the day before hopping on the charming little train bound for Pingxi.

Breakfast and Snack for Two Persons 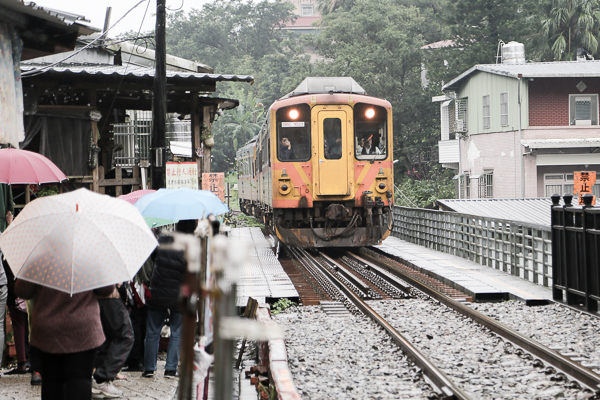 This is one of the most popular weekend excursions for Taipei residents, a trip to the nostalgic Old Taiwan on wobbly narrow guage trains chuggling along a former coal line originated by the colonial Japanese. In a short 50 minutes the train would call at eight rural towns with varying degrees of oddity, or possibly charm depending on whether you’re a photographer, a history buff or perhaps a cat person. 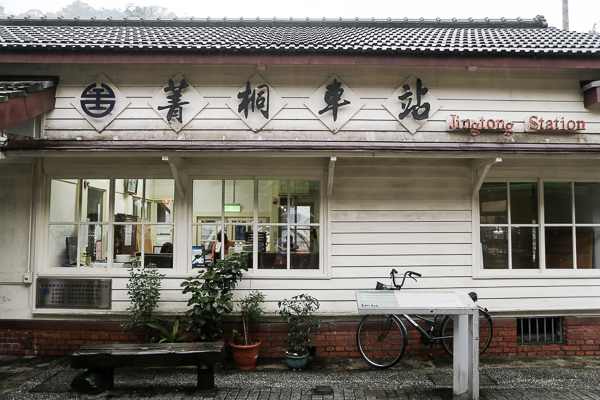 End of the line is a sleepy town that epitomizes the dramatic rise and fall of the rail spur, built during the reign of Japanese Emperor Taisho when the town of Jingtong boasted the largest coal mine in colonial Taiwan. The thousands of miners had long departed after the coal ran out, leaving the town deserted in its current state as a weekend tourist draw. 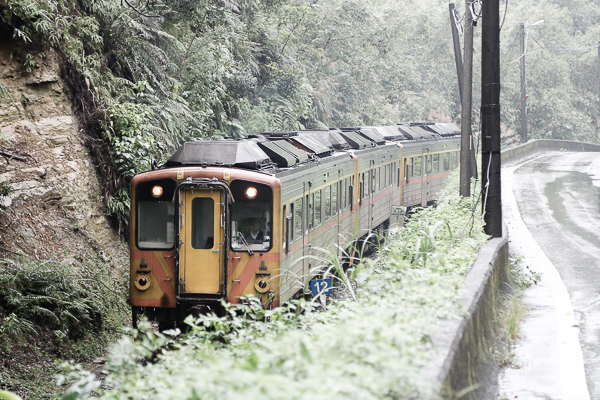 Japanese diesel trains still run along these tracks on an hourly basis, infrequent enough that we decided to hike to the next station of Pingxi in the light drizzle. Prior to leaving Jingtong we picked up a mediocre grilled sausage at a street side stand, as well as a miniature model of the region’s traditional sky lantern. 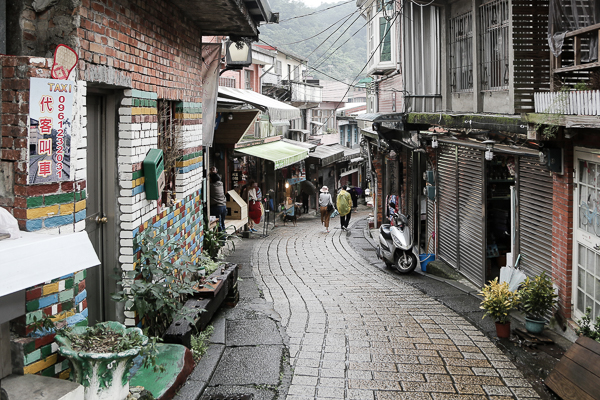 Within 20 minutes we arrived at the historic town of Pingxi, renowned internationally for its breathtakingly photogenic sky lantern festival held annually on Day 15 of the First Lunar Month, the traditional Chinese equivalence of Valentine’s Day. Having previously released sky lanterns at its birthplace of Sichuan, we have since learned to steer away from this environmentally unfriendly activity. 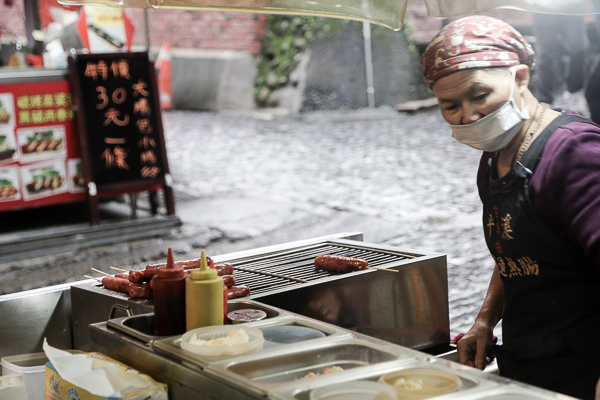 The town’s main pedestrian crossroad is well-known as the battleground of several prominent sausages stands, including the pictured Pingxi Street Charcoal Grilled Sausages (see location map) where we picked up one of the best Taiwanese sausages of our trip. 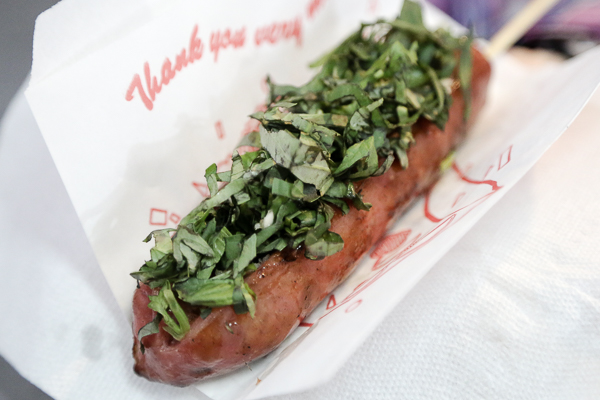 Freshly handmade with the region’s indigenous black-haired pork and marinated with Kaoliang liquor, these sausages were filled and grilled in front of the clientele and topped with the choice of Asian basil, Japanese mayo or other salivating condiments for TWD 35 each. Meanwhile the archrival across the alley just lowered the price of their gargantuan small sausage in big sausage to just TWD 30 in a cutthroat move as we sat down. 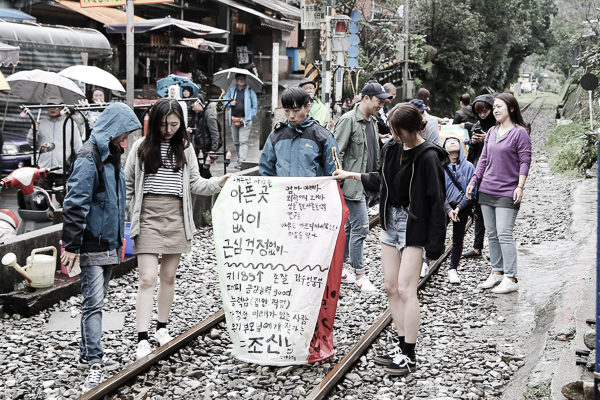 A sky lantern with Korean well-wishes being released. Most visitors don’t realize the chilling origin of the lanterns as stern warning signals, announcing the arrival of murderous bandits at this mountainous corner of Qing Dynasty Taiwan more than a century back. 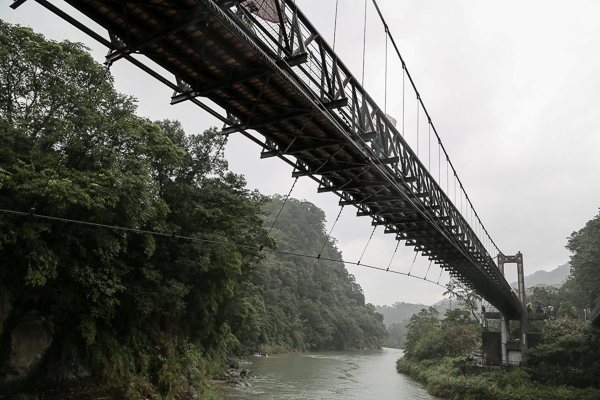 At Pingxi we briefly deviated from the train route and took the half-hourly Bus 795 to Shifen, stopping close to the town’s famous waterfalls and numerous suspension bridges crossing this turbulent stretch of the Keelung River. 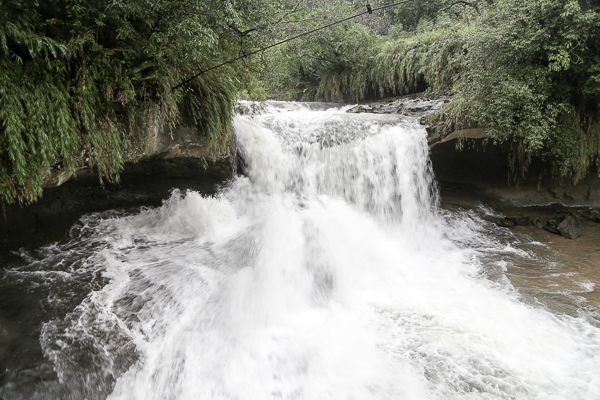 At Yangjingdong Waterfalls we turned back towards Shifen, skipping the larger Shifen Waterfalls as the monsoon rain became increasingly treacherous that afternoon. It would be another 15 minutes’ walk before we would arrive at Shifen Station. 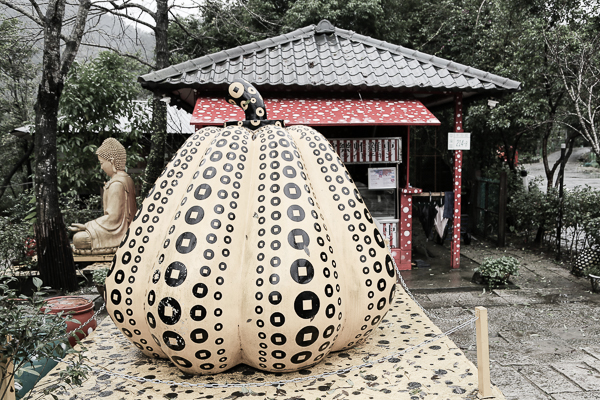 On the road to Shifen I thought we came across the brilliance of Yayoi Kusama, her instantly recognizable giant pumpkin speckled with polka dots … oh wait … the shape of ancient East Asian coins with a square hole within the dot? We had little time to investigate as we hurried under the relentless rain towards Shifen, in search of more gastronomic delights. 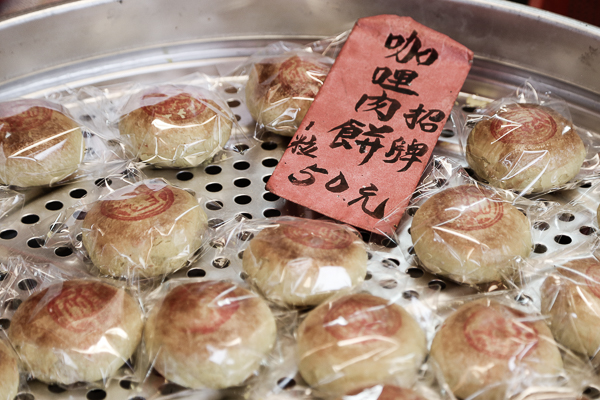 Shifen is home to the 80-year-old pastry shop of Zhou Wan Zhen (see location map), revered for its traditional wedding pastries since the Japanese colonial era. Each cake is expertly handmade by an artisan patissier and demands the premium price of TWD 50, about the same as a filling bowl of rice noodles. 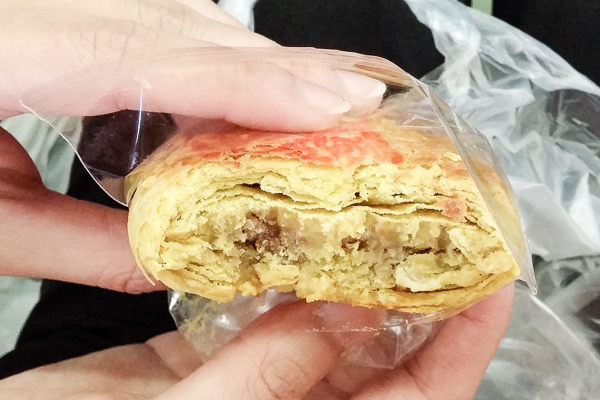 Beneath scrumptious layers of lard pastry is a traditional filling of lotus seeds and minced pork, ground into a melt-in-your-mouth paste and lightly curried for a mild little kick. For domestic Taiwanese visitors this is a taste of their grandmother’s era somehow surviving into the 21st century, largely as part of the local custom for weddings favours. 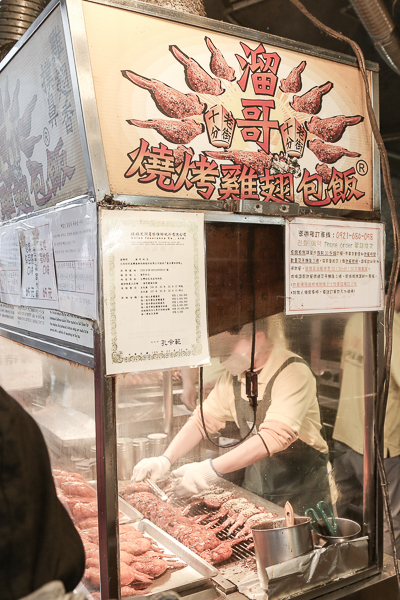 In front of Shifen Station we joined the longest queue of the day at Liuge Stuffed Barbecued Wings (see location map), immensely popular with the multi-national legions of Korean- and Japanese-speaking visitors curious for this modern twist of a traditional and labour intensive recipe. 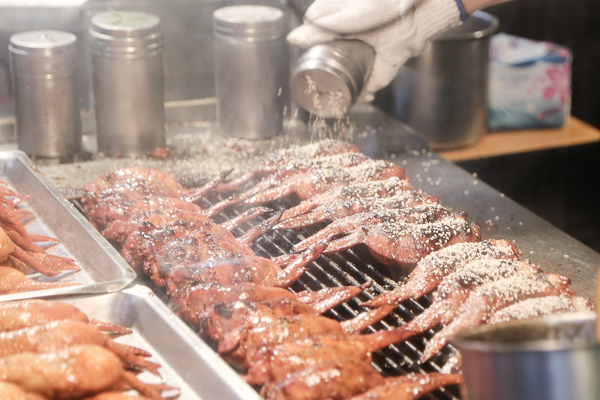 Our previous encounter with stuffed wings was at a tiny izakaya in Tokyo in the form of Teba Gyoza, a deep-fried chicken wing filled with gyoza meat. Here the product takes on the Southern Chinese influence of stuffing chicken wings with rice — not the traditional glutinous rice but standard Taiwanese fried rice — and patiently grilled to perfection on charcoal slats. 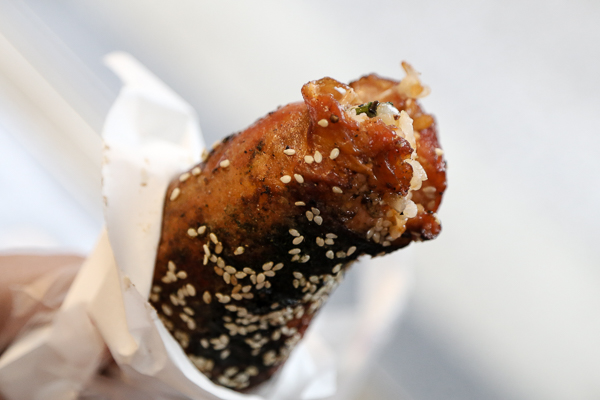 For curious foodies desiring a bolder and more exotic stuffing than fried rice, the other option is a classic night market flavour of Stinky Tofu and Kimchi, finely diced and crammed into the cavity of one deboned wing. Both flavours turned out delicious, though I personally preferred the pictured fried rice stuffing. 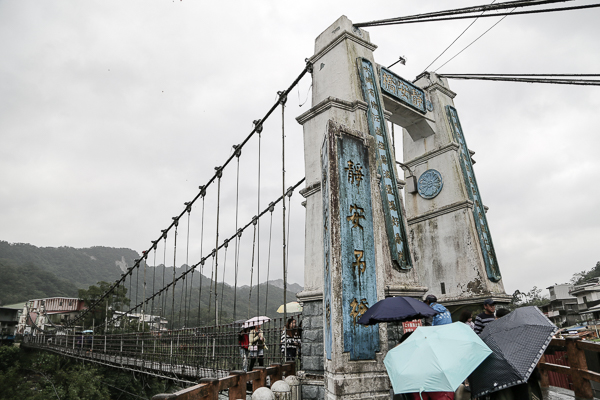 The wobbly diesel train returned us to Ruifang one final time to pick up our heavy suitcases from the rental apartment. In this terrible weather we definitely would have appreciated an extra night in Ruifang rather than hauling our luggage onto the bus for our overnight stop of Jiufen, merely 20 minutes away. This would be my best advice for faithful readers reading this far.

The Pingxi Line is one of the most popular day-trips from Taipei, the start terminus of Ruifang being a quick 30 minutes away on express trains. Most travelers transfer at Ruifang with the option of picking up an unlimited day pass for the spur line between Ruifang and Jingtong, for a cheap TWD 60 (CAD$2.6) at the time of writing. Once again, for those who prefer a slower few days of exploring Pingxi, Jiufen and Northeastern Taiwan in general, the authentic blue-collar town of Ruifang makes a great homebase with convenient transport and mouth-watering cheap eats.