Zamora – Medieval Citadel on the Duero 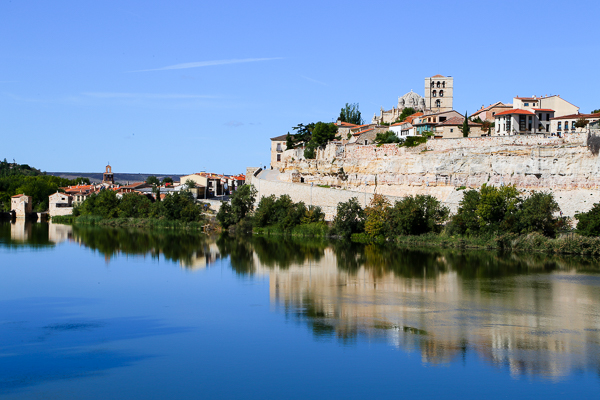 Rome was not built in a day. Likewise to the Spanish, no se ganó Zamora en una hora — Zamora was not conquered in an hour. As renowned as Ancient Rome is for its monumental buildings, Zamora is just as famously associated with its formidable fortress that fiercely resisted its abundance of would-be conquerors. 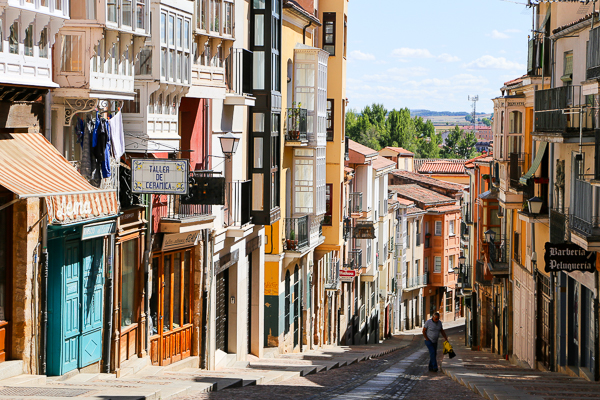 By chance we passed through this picturesque small city for a day-trip along the final leg of our 16-day journey across Spain, en route from elegant Salamanca to our ultimate destination of Santiago de Compostela. 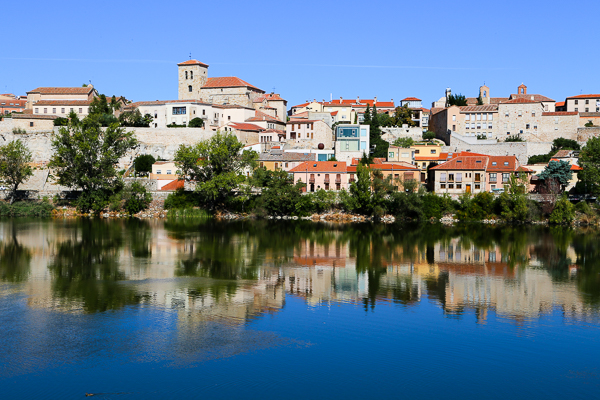 Located in the northwest of the Castilian plateau, Zamora has always played its role as a frontier town, first as a Roman outpost on the Via de la Plata then as a medieval stronghold that changed hands between the Moors and the Christian forces. Its Latin name literally meant Eye of the Duero, a testimony to its significance as a trading hub at the western edge of the Roman Empire. 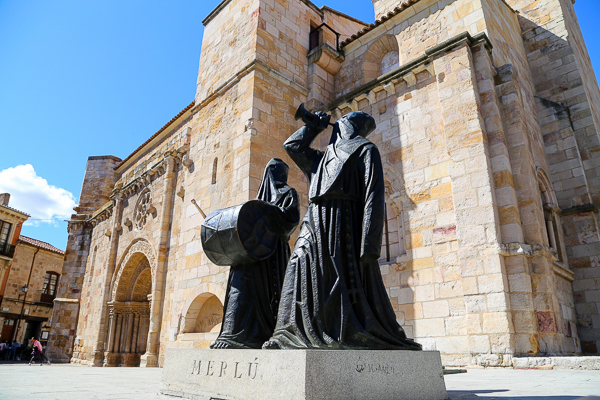 That morning we checked out of Salamanca and hopped on a 09:00 highway bus to Zamora, stashing our backpacks at the bus station and maximized our 7 hours for sightseeing and lunch before our late afternoon train to Santiago de Compostela. The bus and train stations were strategically located within 3 minutes’ walk of each other, making the transfer a breeze. 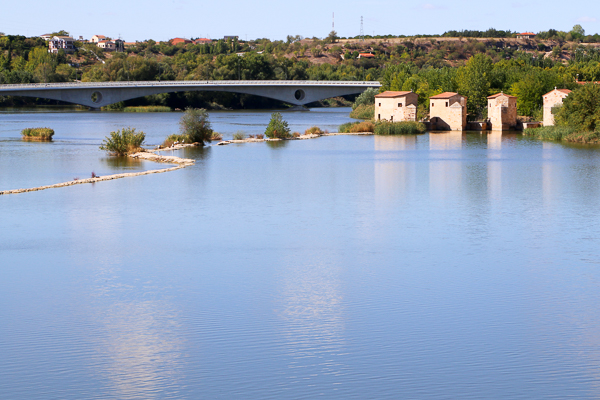 We began with a quick taxi to the far side of town, the southern bank of River Duero and its 1000-year-old flour mills on the water. Communicating with the taxi driver was an adventure in itself, though our veteran driver somehow understood my butchering of the Spanish language when I asked for “sur de Puente de Piedra.” 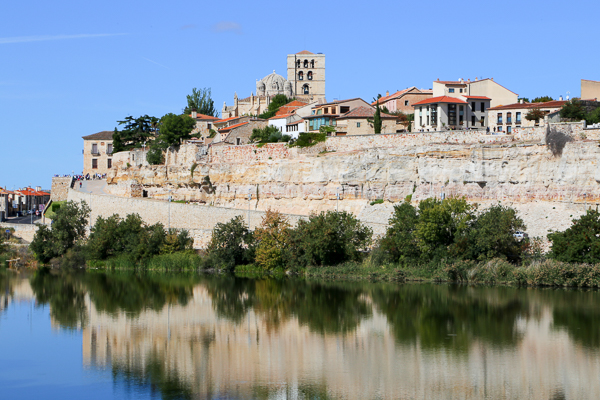 Everyone’s reason for visiting the south bank was this classic postcard view of the ancient walled town reflected upon the Duero, a bastion considered impregnable until Napoleon’s forces rolled into town in the 19th century. Also visible from the bank were dozens of resident storks perched on manmade weirs, readying to take flight as hot air started to rise under the scorching Spanish sun. 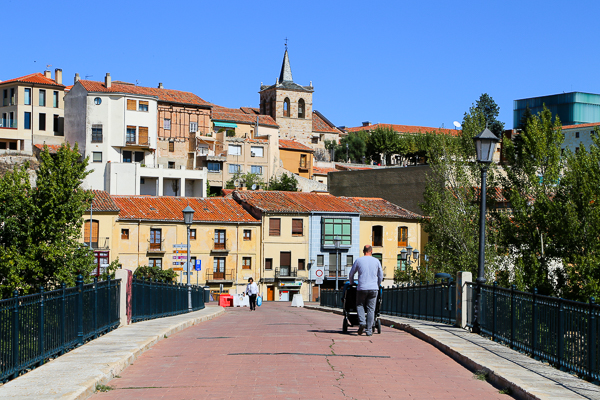 Linking the two banks is the recently pedestrianized Puente de Piedra, a exemplar of rugged Roman engineering that has endured nearly 2000 years of weathering and flash floods. An uphill turn upon crossing the bridge would lead to the heart of the medieval town, its main square to the east and its diamond-shaped castle to the west. 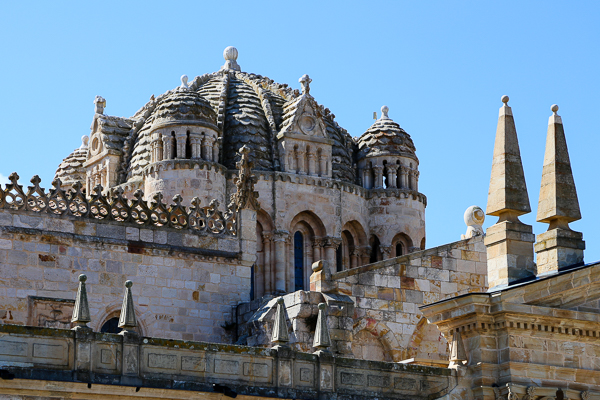 Next to the castle stands the most photographed sight in Zamora, the archaic, Byzantine-influenced dome of its 800-year-old cathedral, one of the best-preserved examples of Romanesque architecture in Spain and a marked contrast against the heavily Gothic cathedrals at nearby Salamanca. 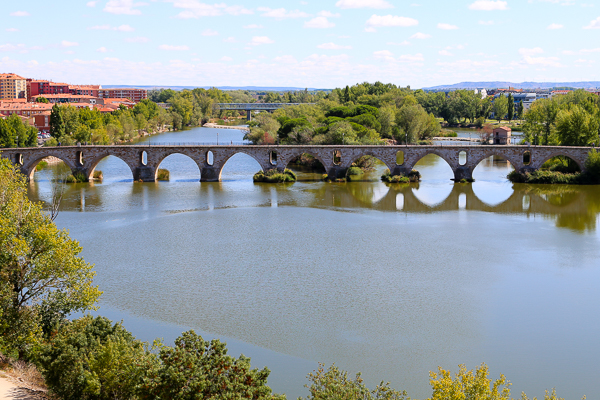 Just east of the cathedral is a sundrenched terrace known for its sweeping panorama of the Roman bridge that, for the past 2000 years or so, has straddled the meandering Duero before the river enters Portugal as the Douro, a name familiar to all wine lovers. 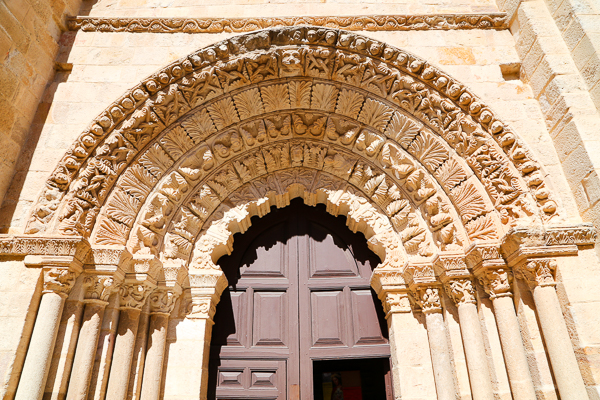 One of Zamora’s claims to fame is its abundance of medieval Romanesque churches, the greatest number of any city in the world and boasting extraordinary specimens such as the 13th century Iglesia de Santa Maria Magdalena. 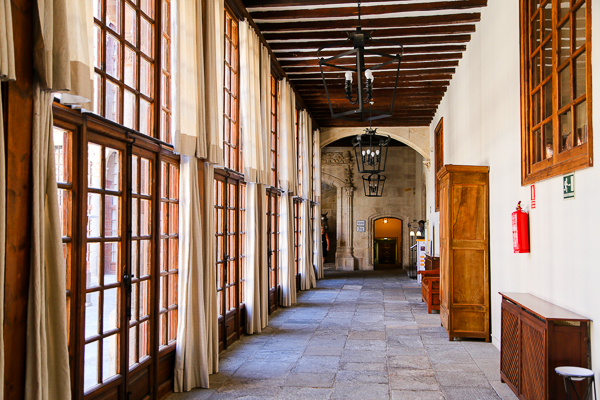 A few blocks down the historic quarter’s thoroughfare and we arrived at Zamora’s own Parador, a stately 15th century palace now converted into a government-owned luxury hotel. Unlike the more snobbish Paradors — Santiago de Compostela’s comes to mind — which tend to shut their doors to walk-in tourists, Zamora’s Parador apparently welcomes casual visitors to freely roam and appreciate its elegant corridors and tapestries. 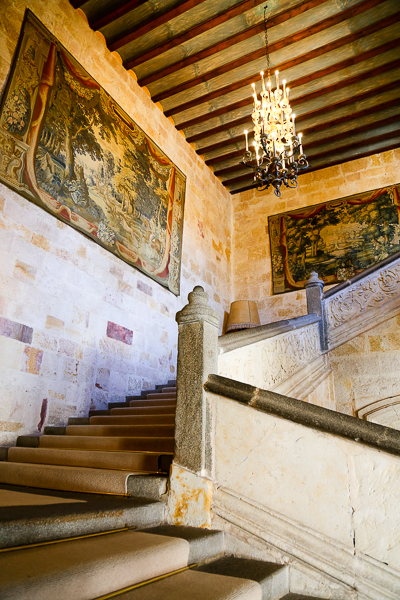 The friendliness of the concierge staff was almost shocking — one gentleman even chased us down to gift us a handsome, multi-language book that the tourism office has produced for the precious few foreigners visiting this seriously underrated region in western Spain. 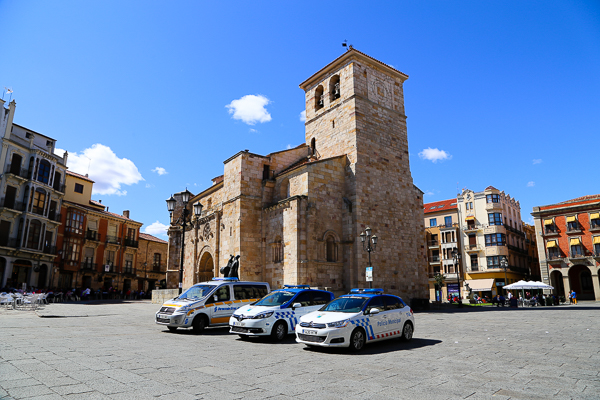 Aside from this convoy of police cars, Zamora’s main square was occupied by yet another 12th century Romanesque church known as Iglesia de San Juan Bautista, best known for its elegant rose window that graces the city’s emblem. In case you’re wondering if the police officers were all sitting in the shade sipping Cafe con Leche, the police station was actually housed inside a 16th century palace facing the square. 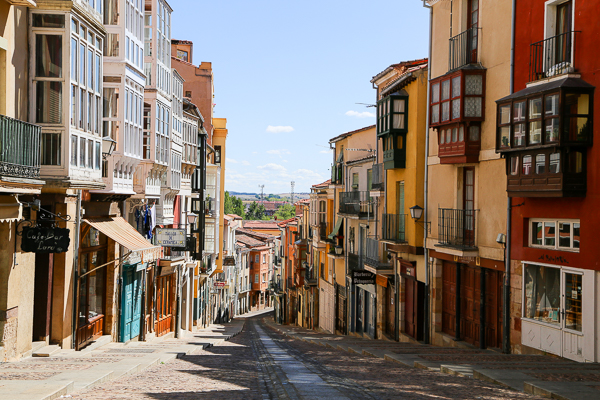 Flowing effortlessly downhill from the square is Zamora’s most photogenic street, the historic Calle de Balborraz where the city’s nationally renowned Holy Week processions take place every spring. But the sights could wait — we must first stuff ourselves with a substantial lunch before our 4 hour train ride with little except ham and bread for dinner. 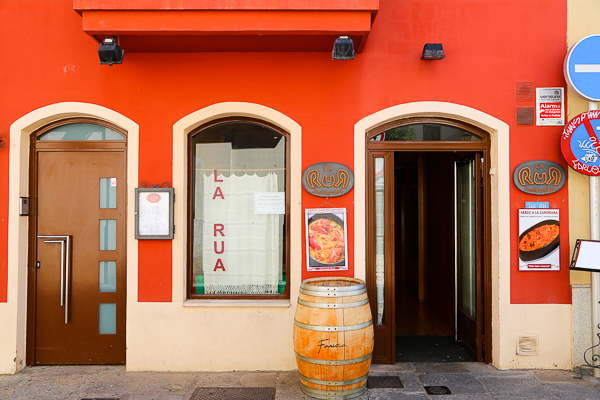 Foremost on our radar was the regional favorite of Arroz a la Zamorana, the landlocked Castilian plateau’s answer to the internationally-famous paella ubiquitous along the coastline from Barcelona to Valencia to Costa del Sol. Out of several eateries advertising this dish along the main thoroughfare of Rua los Francos, we picked this traditional restaurant just one block from the Parador. 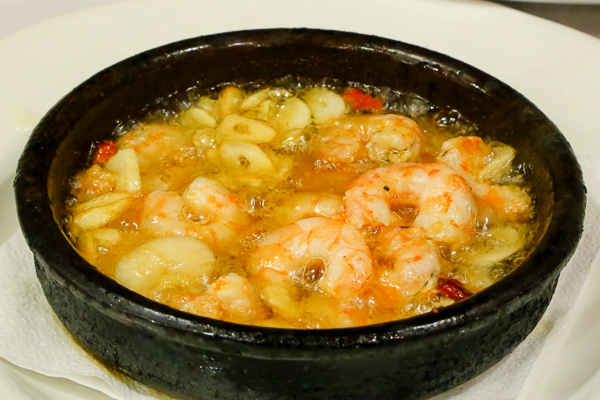 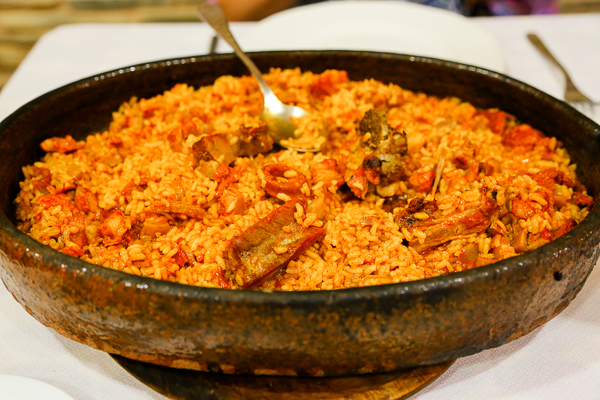 Arriving blistering hot on a ginormous terracotta tray, our 2-person order of Arroz a la Zamorana came in a portion large enough for four grown adults, for a cheap price of 19 euros. In theory this wasn’t so different from a seafood paella except for the shellfish being replaced by mysterious cuts of pork, and served on a clay dish rather than a paella pan. 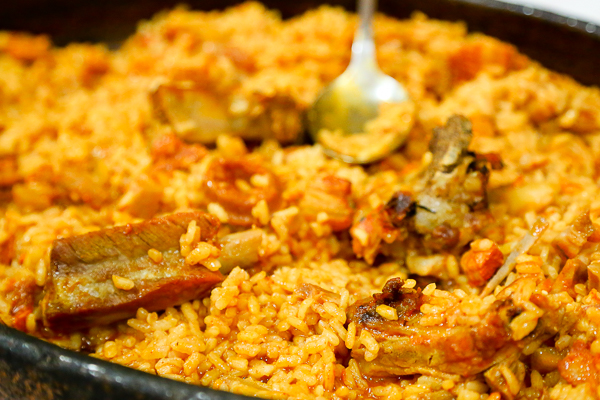 Spicy sausages, pork ribs, hocks, tripes, skin and various odds and ends of the pig all made it into the rice, oven-baked in generous amounts of lard and paprika. Beware of the loose splinters of rib bones. 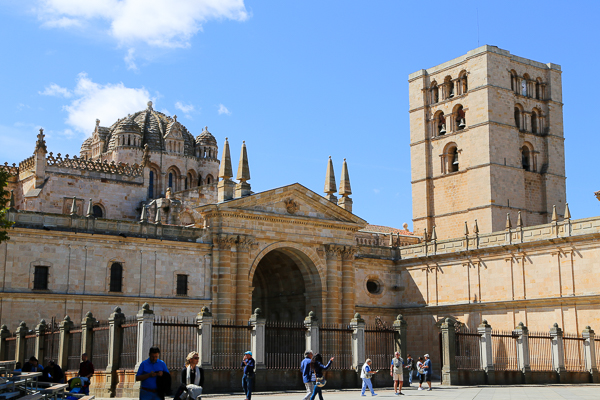 After an extended lunch we slowly made our way across town, dropping by a Dia supermarket for some cheap and genuinely Spanish souvenirs before picking up our luggage at the bus station. Our train for Ourense would leave just before 18:00, and it would be close to 22:00 when we finally arrived at Santiago de Compostela.

The Legendary Suckling Pig of Segovia